After graduating from finishing school as a well-bred “Fancy Lad,” Nathanial Mayweather prepares for a trip to Hawaii. But his plans are dashed when he mistakenly boards The Filthy Whore, a fishing boat manned by a ragtag crew of salty shipmates, and soon becomes the vessel’s hapless Cabin Boy. On his journey, he woos the feisty but beautiful Trina and encounters a host of eye-rubbing curiosities including an amiable shark man, a savage ice monster, a tobacco-chewing cupcake, and a six-armed seductress who relieves Nathanial of his virginity, much to the displeasure of her 30-foot salesman husband. 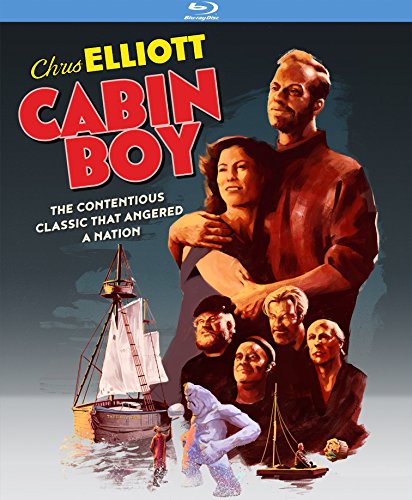 Cabin Boy begins as Nathaniel Mayweather, the most arrogant, self-centered virgin you will ever meet, graduates finishing school. His father sends a limo driver to take him to the ship, the Queen Catherine, which will then sail to Hawaii where Nathaniel will work for his father. However, Nathaniel quickly pisses off that driver who then kicks him out of the limo; stranding Nathaniel in the middle of nowhere.

So Nathaniel walks along the road in the direction his driver was going until he sees a sign for the Queen Catherine. Unfortunately for him, a cow is blocking the arrow which directs him down the correct road, and Nathaniel winds up going left instead of right.

That takes him to a small fishing village where he runs into a ship’s very dumb, and easily distracted cabin boy, Kenny. Nathaniel is not very bright himself, and he mistakes this ship, named The Filthy Whore, for a fun theme boat. He goes to sleep in the Captain’s bed where the rest of the crew doesn’t discover him until the next morning after Captain Greybar wakes up next to him. Now, Nathaniel learns that not only is he not headed for Hawaii, but the boat he’s on has just embarked on a three month fishing trip. Nathaniel is S.O.L.!

The annoying Nathaniel does his best to get the crew to change course for Hawaii, but he’s unsuccessful. It’s not until they are asleep that he convinces Kenny that the Captain has always secretly wanted to go to Hawaii. Kenny changes course, and sets sail for the Aloha State.

This new path takes the Filthy Whore straight through Hell’s Bucket which is known to be a cursed region of the sea. As it enters the region, a storm begins to rage as the crew sleeps. Nathaniel and Kenny are alone above deck, until part of the ship breaks, and knocks Kenny into the ocean where he drowns. The rest of the crew wakes to find the ship in disrepair, and decide to head to an island in the center of Hell’s Bucket where they can repair the Whore and ditch Nathaniel.

In the mean time, the crew is now without a cabin boy, so they force Nathaniel to become the new one in exchange for “taking” him to Hawaii. However, Nathaniel is still annoying as hell, and the crew can’t stand him. They assign him a week long chore where they will float him on a tiny raft for a week to play lookout for the ship.

They give him some bread and chocolate milk for survival, but really, they hope he doesn’t survive. Those portions don’t last long, and Nathaniel resorts to drinking sea water. After confusing cooking oil for sunblock, Nathaniel gets severe burns on his body. He begins hallucinating things like a floating cupcake that talks and spits tobacco.

He snaps, and falls into the ocean. He nearly drowns, but Chocki, the half Viking-man / half shark saves him, and pouts him back on the raft. A full nine days pass on his little raft, and his time’s up. He returns to The Filthy Whore where he tells the crew what happened.

Both Skunk and Big Teddy have heard of the shark-man who is apparently the offspring of a male viking and female shark, but they say Chocki is nothing but trouble because he’s bipolar; he will like a person one minute, and then hate him in the next.

Soon Nathaniel spots the lovely Trina swimming in the ocean. After she doesn’t reply when he calls out to her, he throws a net over her, and pulls her up into The Filthy Whore. While he immediately falls for her, she’s pissed at him for ruining her swim around the world from Maryland to Maryland. Equally pissed are The Filthy Whore’s crew who can not afford to feed another mouth on the ship. They secretly decide to strand both of them on the island they are headed towards.

Once they do reach the island, the crew spreads out to fins the supplies they need to repair their ship. Meanwhile, Nathaniel is dismayed that Trina is constantly rejecting his creepy advances. Captain Greybar and Skunk tell Nathaniel of a woman on the Island named Calli who can help him with his women issues. The cabin boy heads off to see her, and when he returns, he will be a cabin man.

Calli turns out to be a blue-skinned, six-armed married woman who takes Nathaniel’s virginity before her giant husband, Mulligan, comes home from his sales job. Once finished, Nathaniel exits her love cave, and goes to meet Trina with his newfound confidence. Trina is now all over his seafaring shit.

Unfortunately for The Filthy Whore, Calli’s husband has now returned home, and fe, fi, fo, fum, he smells the blood of an Englishman. Mulligan heads down to the shore to find The Filthy Whore setting sail.

Nathaniel and Trina also spot The Filthy Whore leaving without them. Trina knows what’s up; that the crew was leaving them behind, but Nathaniel doesn’t believe her. Instead he uses his new found influence over her to help him rescue everyone.

Once Mulligan captures Nathaniel, he confesses that he’s the one who slept with his wife. Mulligan prepares to cut Nathaniel’s head off with his giant-sized fingernail clippers, but Chocki swims up to save him. This distracts Mulligan long enough for Nathaniel to remove Mulligan’s belt and choke him to death like Princess Leia and Jabba the Hut.

With everyone safe, The Filthy Whore heads on to its final destination in Hawaii. Nathaniel offers his new BFFs jobs at his daddy’s hotel, but they decline that offer as the sea life is the only life they know. They suggest that Nathaniel stay with his dad in Hawaii because that’s where he belongs.

Everyone parts ways as does Trina. She’s going to continue on swimming the world. Once Nathaniel meets with his father, William Mayweather, in his office, daddy tells Nathaniel what a disappointment he is. However, Nathaniel is now all growns up, and he leaves. He tracks Trina down before she leaves the island, and tells her he loves her. The two swim out to The Filthy Whore where they re-join the crew.