Welcome to the elitist Bushwood Country Club where the stuffy president of the clubhouse, Judge Elihu Smails, always has some undignified scheme going on. However, a suave golf guru named Ty Webb and filthy-rich construction magnate named Al Czervik are onto him. Also at the club is a young caddie named Danny Noonan who struggles to get his life on track. Winning the Caddie Day golf tournament can earn him a scholarship from the judge, and set him on the right path. However, when all out war breaks out between the Judge and Czervik, the stakes become much higher for everyone at the club. 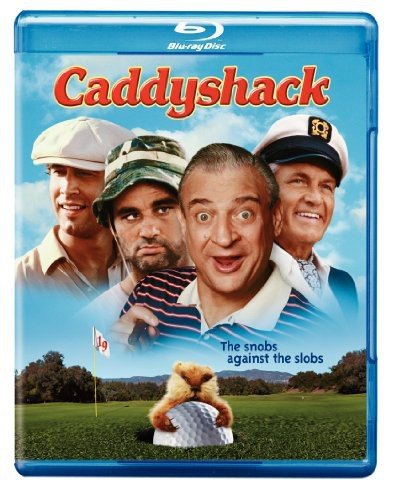 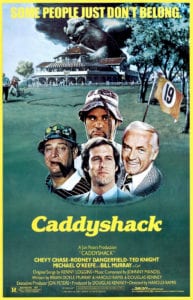 Harold Ramis’ directorial debut of Caddyshack opens with a mischievous mechanical gopher reeking havoc and dancing to Kenny Loggins at Bushwood Country Club somewhere that’s supposed to be Nebraska but looks a whole lot like Florida and, at times, Chicago. As our little furry friend burrows his way faster than Usain Bolt across the 9th green, Judge Smailes, played by Ted Knight, everyone’s favorite silver-haired pompous, elitist, blowhard, and head of exclusive Bushwood bellows to the groundskeeper to destroy the rodent before it destroys the course.

Danny caddies regularly for ultra-rich and ultra-distracted Chevy Chase as Ty Webb doing his best young Clark Griswold impression before he married the heavenly Beverly D’Angelo. Ty is better at golf than Jack Nicklaus simply by quoting zen gibberish and chanting a few na-na-na-nas but he’s too cool to care since he just sleeps with a super-hot blonde ball washer in the movie so it doesn’t really matter. Pick up those gumballs.

Rodney Dangerfield’s screen debut as super-millionaire Al Czervik arrives in a Rolls Royce complete with ah-oogah horns and he’s dressed in a mismatched leisure suit with plaid coat, orange shirt and yellow pants and a personality that is even louder. He steals scene after scene until he finally breaks his arm by an errant tee shot off a ball washer. No not THAT kind of a ball washer. Pick up that tissue.

Assistant greenskeeper and functionally retarded Carl Spackler, played by a barely-post SNL Bill Murray, is given the apparently monumental task of killing one gopher on the course, with all forms of available World War II surplus weapons from firehoses, to hunting rifles, to plastic explosives dressed as barnyard animals. And apparently during monsoons, Carl acts as a quasi caddy-slash-jeeves for a bishop playing the round of his life, before the bishop re-enacts Ben Franklin holding his putter skyward in anger toward heaven and all its angry lightning bolts.

All kinds of golf-related chaos ensues as Rodney drives Judge Smailes to the brink of insanity with yacht bumper cars, buying his “jewish” friend, Mr Wang, endless golf supplies and fashionable hats that get you free bowls of soup, and bets the judge $20,000 for a round of golf. Ty bangs the incredible blonde from Tron that was contractually obligated to get naked on film and then loses his zen and apparently his god-like golf skills due to any kind of pressure.

Danny gets the teenager from Animal House doing a horrible Irish accent pregnant then sleeps with the hot Tron girl, then tries to win the Caddy scholarship, THEN joins an illegal round of golf worth $80,000, all the while Carl is chasing the gopher using any and all means possible, including actually blowing up the entire 17th hole during the final putt!

Does Carl ever kill the gopher? Does Mr Wang get his free bowl of soup? Does the Animal House girl end up pregnant and annoying or just plain annoying? Does Smailes find his checkbook before Moose and Rocco wring his pompous neck? Does the Smailes grandson pick his nose for $50 bucks then eat it for double or nothing? Why the hell would Danny bang the Animal House girl when he is already married to the super-hot female blonde guitarist from Heart? Does anyone really care about Danny and his college plight or just want to watch more of Rodney, Ted, Bill and Chevy take their incredible comedy talents to the inevitable Caddyshack sequel that didn’t have any of them in it and bombed because it was so stupid? Does anyone else on this planet want to sleep with the smokin’ hot Tron girl because I sure as hell want to! Watch the movie and find out.