Captain America begins in 1936. A Nazi experiment transforms a young Italian boy into an angry supersoldier named Red Skull. The lead scientist, Dr. Maria Vaselli, doesn’t like the way the Nazis use her invention. She escapes them, and flees to America.

The military immediately sends Captain America to stop Red Skull. They’ve learned plans on sending a missile to destroy the White House. The two men face off, and the Captain winds up strapped to the missile. He manages to divert the missile’s path just seconds before it hits the White House, but it’s new trajectory send him crashing into the frozen Alaskan tundra where he sits frozen for the next 50 years. An expedition finds him in 1993, and he immediately thaws out, and flees.

Rogers stumbles back home to California where he finds his childhood sweetheart is nearly 70 years old. Unfortunately, Red Skull is still alive too, and his minions have just successfully kidnapped the President of the United States. It’s up to the Captain to take out his arch-nemesis once and for all. 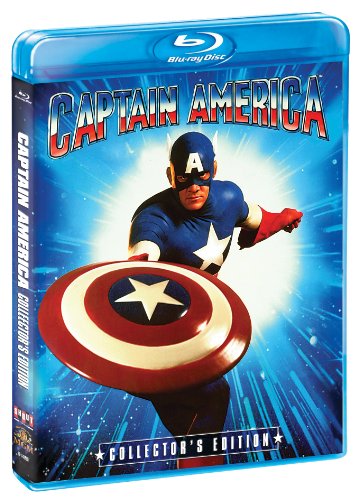 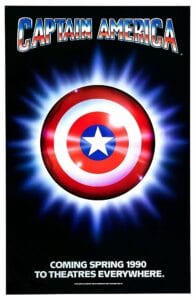 Captain America begins in 1936 in Fascist Italy. The government kidnaps a child prodigy named Tadzio de Santis before murdering his family. They plan to use this boy in an experiment to create a Fascist Super Soldier. However, after the procedure’s inventor, Dr. Maria Vaselli, objects to the cruelty Santis endures she defects to the United States. There, she offers her services to the the good ol’ U.S. of A., and they are much obliged.

Seven years pass, and the U.S. government finds a frail boy with a big heart named Steve Rogers. Polio has crippled him to the point he’s ineligible for the draft, but that doesn’t stop him from trying to enlist. When the military brings him into their fold, they inject him with their formula that not only cures him of any disease, but gives him the strength and speed of a world-class athlete.

However, before any more Super Soldiers are created, a Nazi spy, in league with Lieutenant Flemming, murders Vaselli. Rogers kills the spy, but not before the spy is able to shoot him three times.

Elsewhere in the world, Santis is now a 20 year old man. The abuse he suffered from Vaselli’s early formula has rendered his skin red and horrifically burned. Fortunately, he has the same super strength as Rogers, so he has that going for him, which is nice.

Now, using the name Red Skull, Santis plans on the destruction of the White House using a prototype intercontinental ballistic missile. Rogers recovers from his wounds at Super Soldier speed before the military code names him Captain America, and orders him to take down the Red Skull and deactivate his mighty, mighty missile.

Rogers makes it to the Red Skull’s little compound, and the two briefly fight. After Red Skull gets the upper hand, he ties Rogers to the missile as is prepares to launch to greener pastures. Rogers snatches Red Skull’s arm, and tells Red Skull he’s going on the trip with him. However, Red Skull cuts off his own hand off first to avoid taking the ride with him.

As the ICBM closes in on Washington D.C., a young boy named Thomas Kimball photographs Captain America as he kicks one of the missile’s fins. This results in a change of course to Alaska where it crashes under an ice sheet with Rogers still attached to it; trapping him in the frigid waters.

Fifty more years pass, and that little boy is now a grown Vietnam War hero, and recently elected President of the United States. A year into his term, Kimball begins to implement some very aggressive pro-environment legislation. This pisses off the U.S. enemies, so Red Skull, who is now the leader of a powerful crime family, calls a super secret conference to stop the President.

His organization has had much success over the years—anyone who was against their views they killed—Dr. Martin Luther King Jr, President John F. Kennedy, and his brother Robert to name a few. However, the Red Skull doesn’t approve of killing Kimball because after they murdered Elvis Presley, the public failed to believe he died (as does my cousin to this day). Instead, Red Skull decides to kidnap the President, brainwash him, and use him for EVIL.

Out in the great state of Alaska, some explorers stumble upon Rogers’ frozen body. When his body thaws, he wakes to find the 1940s are long gone, but at least he’s alive. The Captain’s sudden rebirth makes headlines all over the world which captures the attention of the Red Skull.

He sends some minions to take Rogers down once and for all, but he dodges them. Then he dodges a pesky reporter named Sam Kolawetz before hitchhiking his way back to his wartime girlfriend, Bernice. She still lives the same house from all those years ago in California, and has married and raised a daughter named, Sharon. Sharon is kind enough to give Rogers some VHS history tapes to watch, and get up to speed on world events.

Meanwhile, the Red Skull sends his super minion named Valentina to kill Bernice. Her death causes her husband to suffer a near-fatal heart attack. While this is going on, Rogers and Sharon return to the super secret underground base where he gained his superpowers. There, they recover Vaselli’s old diary, and learn the Red Skull’s original identity. The Red Skull’s minions are there to nab it, but Rogers uses his shield to take them out.

Rogers and Sharon next visit her father in the hospital where they learn the Red Skull has kidnapped the President. Rogers vows to rescue him, and the two head out to Italy. They soon arrive at the Red Skull’s childhood home where they find an old recording of the piano recital where his parents were murdered. Sharon agrees to let the Red Skull kidnap her as a distraction for Rogers to enter Red Skull’s lair in his pretty Captain America outfit.

Inside, Kimball has managed to escape his cell, and when he runs into Captain America, he’s starstruck at meeting his childhood hero. The two men team up to take down the Red Skull. Soon, it’s Super Soldier against Super Soldier, and as the two men fight, the Red Skull pulls out a remote which can trigger a nuclear bomb.

Rogers retaliates with Sharon’s recording of the murder of Tadzio de Santis’ family. With the Red Skull momentarily distracted, Rogers uses his shield to knock him off a cliff. Valentina turns to kill Rogers, but his shield hits her from behind upon return of its flight; knocking her booty out.

The United States Marines swoop in for clean up. They pick up the President, and arrest anyone involved in his kidnapping. Rogers and Sharon share a warm embrace as a voiceover announces over the airwaves that countries around the world are passing President Kimball’s new environmental pact.