Captain America leads the fight for freedom as the ultimate weapon against evil! When a terrifying force threatens everyone across the globe, the world’s greatest soldier wages war on the evil HYDRA organization, led by the villainous red Skull. 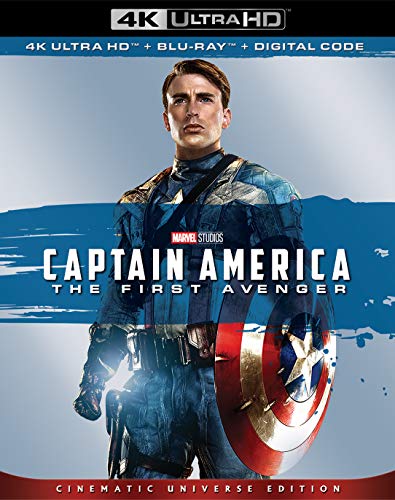 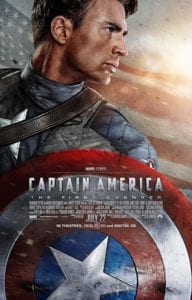 Captain America: The First Avenger begins with Nazi officer, Johann Schmidt, stealing a mysterious relic called the Tesseract from the town of Tønsberg, Norway. We then cut to Steve Rogers as he attempts to enlist in the United State’s military, but he’s a frail, sickly little man, so the military rejects him time after time. However, Dr. Abraham Erskine likes Rogers’ spunk, and allows him to enlist anyway.

The good doctor takes him into his Strategic Scientific Reserve where Rogers will be part his super-soldier experiment…very exciting! However, the Johann Schmidt, the head of a German science division known as Hydra, fears the project’s success, and he sends the evil assassin, Heinz Kruger, to kill Erskine.

Despite the risks, Erskine injects Rogers with a special serum, and then showers him with vita-rays. Rogers comes out of his super-soldier treatment taller and stronger than ever before. However, Kruger shows up, and kills Erskine. As he flees, Rogers pursues and captures him, but Kruger commits suicide with a cyanide capsule before authorities can interrogate him.

With Erskine’s sudden death, his super-soldier formula is lost forever. So, U.S. Senator Brandt dresses Rogers up as Captain America to promote war bonds while he has his scientists study him in a feeble attempt to reverse-engineer the serum.

On a tour of duty in Italy, Rogers’ good friend Sgt. James “Bucky” Barnes and his entire unit are listed as MIA in a battle against Hydra. Rogers gets Howard Stark to fly him behind Hydra’s lines to rescue Barnes and the other men. He then confronts Schmidt who removes his mask and reveals his Red Skull appearance.

Later, Rogers recruits a small team to attack other Hydra fortifications. Stark creates armor for Rogers including a circular shield made of the ultra rare metal known as vibranium. Rogers and his team then successfully take out many Hydra operations.

Fast forward a few years, and the team captures Schmidt’s henchman, Dr. Arnim Zola, but Barnes falls to his death in the assault. Zola reveals the location of Hydra’s main lair, and Rogers leads an attack on it which stops Schmidt from using weapons of mass destruction on American cities.

While fighting it out in a plane, Schmidt physically touches the Tesseract. It creates a wormhole, and sucks him into space. The Tesseract burns through the plane’s floor, and falls into the ocean. Rogers manages to crash the plane into the Arctic rather than letting it complete its mission of destruction in the United States. Everyone presumes that Rogers perishes in the crash. Stark shows up to pick up the Tesseract from the ocean floor, but he’s unable to locate Rogers or the aircraft.

Rogers wakes in a 1940s-style hospital room, but when he hears the radio broadcast of a baseball game that he attended in 1941, Rogers knows something is up. He goes outside to find himself in present-day Times Square. Nick Fury informs him that he’s been asleep for nearly 70 years.

In a post-credits scene, Fury approaches Rogers on a new mission that could possibly have worldwide ramifications.