Captain America with the Black Widow and the Falcon to battle an unexpected and formidable enemy — the Winter Soldier. 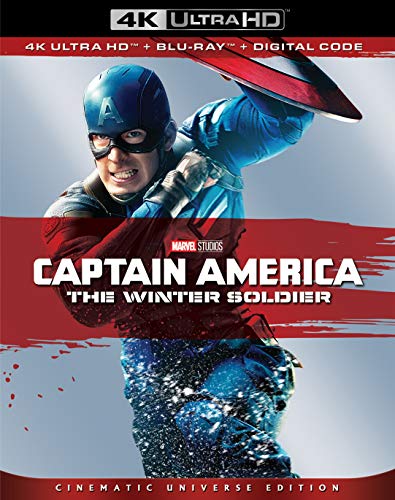 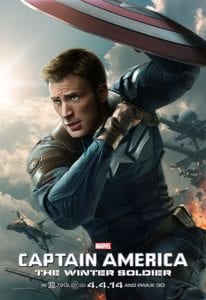 Captain America: The Winter Soldier begins two years after the Battle of New York. Steve Rogers now works for Nick Fury at S.H.I.E.L.D. where Agent Rumlow commands S.H.I.E.L.D.’s counter-terrorism S.T.R.I.K.E. team. Rumlow, Rogers, and Natasha Romanoff set out on a mission to free hostages aboard a S.H.I.E.L.D. vessel that Georges Batroc and his mercenaries captured.

Midway through the mission, Rogers learns that Fury assigned Romanoff to a super-secret side mission to extract data from the ship’s computers. When Rogers returns to S.H.I.E.L.D.’s headquarters, the Triskelion, he quickly confronts Fury over it. So, Fury briefs him on Project Insight where spy satellites linked to three Helicarriers can preemptively eliminate any threat. However, Fury is not able to decrypt the data Romanoff took, and he becomes a bit suspicious about the project. He asks senior S.H.I.E.L.D. official, the Secretary of Internal Security, Alexander Pierce, to delay the project.

As Fury sets out for a meeting with Maria Hill, a shadowy assassin named the Winter Soldier ambushes him. Fury manages to escape, and find Rogers’ apartment. He warns Rogers that S.H.I.E.L.D. is now compromised. The Winter Soldier shows up, and guns Fury down. Fury hands Rogers a flash drive with the data from the ship. After a quick surgery, the hospital pronounces Fury dead, and Hill is there to claim his body.

The next day, Pierce orders Rogers to the Triskelion for a meeting. However, when Rogers doesn’t give up Fury’s flash drive, he finds himself a fugitive. With the S.T.R.I.K.E. team looking for him, he secretly meets with Romanoff to figure out what’s on that drive. They decode a bit of it, and discover a secret S.H.I.E.L.D. bunker in New Jersey.

When the go to it, they activate a supercomputer that contains Arnim Zola’s preserved consciousness. Zola says that ever since S.H.I.E.L.D.’s founding in the aftermath of World War II, Hydra has secretly operated within its ranks. Now, their main objective is to create global chaos in order to make humanity trade their freedom for a bit of security.

An incoming S.H.I.E.L.D. missile suddenly destroys the bunker which Rogers and Romanoff barely escape. They come to the conclusion that Pierce is the leader of Hydra in the S.H.I.E.L.D. organization.

Rogers and Romanoff turn to former USAF pararescueman Sam Wilson whom Rogers befriended some time earlier. They figure that S.H.I.E.L.D. agent, Jasper Sitwell, is another Hydra mole. They bully him into revealing that Zola developed a data-mining algorithm which identifies individuals that are becoming threats to Hydra. The Insight Helicarriers being developed will use satellite-guided guns to eliminate these Hydra threats.

The Winter Soldier ambushes the team, and kills Sitwell. During the melee, Rogers recognizes the Winter Soldier as his bestest childhood pal, Bucky Barnes. He supposedly died in WWII from a fall on a mission, but was actually captured and brainwashed into a killer assassin; working as one for the last 70 years.

Hill gets the trio out of there and to a safe house where Fury pops in to say hi. He faked his death, and is now lying in wait with plans to replace the Helicarriers controller chips.

We next see the World Security Council members arrive to witness the Helicarriers’ launch. Rogers interrupts, and broadcasts Hydra’s plot to everyone at the Triskelion to see. Romanoff is there, and is disguised as one of the Council members. After she disarms Pierce, Fury arrives, and he forces him to unlock S.H.I.E.L.D.’s database which Romanoff can then use to expose Hydra to the public at large. A struggle ensues, and Fury kills Pierce dead.

At this same time, Rogers and Wilson replace the controller chips on two Helicarriers, but the Winter Soldier is there to destroy Wilson’s suit. He and Rogers end up going toe to toe on Helicarrier number three.

Rogers wins that battle, and replaces the final chip. Hill can now take control of the Helicarriers to the point they will each destroy one another. However, the Winter Soldier is still there, and Rogers refuses to fight him as he wants to save his friend. When the ship collides with the Triskelion though, Rogers is knocked unconscious into the Potomac River. The Winter Soldier rescues him before disappearing into the woods.

Romanoff is forced to appear before a Senate subcommittee to answer for S.H.I.E.L.D.’s turmoil. Fury, still pretending to be dead, heads to Eastern Europe to snuff out Hydra’s remaining cells. Rogers and Wilson try to find the Winter Soldier’s location, while Rumlow, who is a double agent for Hydra, sits in a hospital following the destruction of the Triskelion.

In a mid-credits scene, Wolfgang von Strucker walks through a facility where the Scepter is under study. He then walks over to a pair of holding cells containing Quicksilver and Scarlet Witch.

In a post-credits scene, the Winter Soldier is in disguise, and visiting the Captain America exhibit at the Smithsonian Institute. There, he comes across a memorial for Bucky Barnes.