Martin and Katherine are a couple living in Chicago with their two children when they inherit Clark Gable’s old yacht. They decide to sail it from the island of Ste. Pomme de Terre to Miami, but need help. So they enlist the legendary Captain Ron to help them navigate the Caribbean. While they find him friendly and (mostly) competent, it seems Ron has a few ulterior motives for being there that leads the crew into some precarious situations. 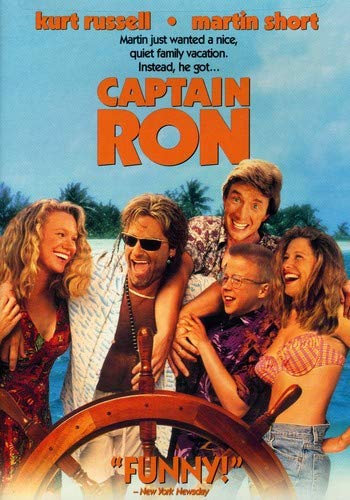 Captain Ron begins when Chicagoan Martin Harvey inherits his newly deceased uncle’s 60’ yacht named The Wanderer. Needing a long vacation, Martin packs up his family, and takes them to the Island of Saint Potato to pick it up.

Initially, Martin’s wife Katherine refuses to go, but when their 16-year-old daughter, Caroline, gets engaged she agrees to the plan.

Unfortunately for the Harveys, when they arrive to the island, they find the yacht in disrepair. Harvey calls his yacht’s broker to let him know the boat is not in the best of shape. When the brokerage hears the bad news, they cancel their plans to send an experienced captain to help sail the boat back to Miami.

Instead, they hire a local who turns out to be a once upon a time Naval pilot, part time sailor, and full time charlatan, Captain Ron Rico. As he arrives, the car he rolls up in falls off the dock and sinks. With a quickie introduction, he makes the Harvey’s set sail before the car’s owner can shoot him.

Captain Ron has the same maturity level as Martin’s 11-year old son, Ben, and the two quickly bond over a game of Monopoly and a six pack of beer (which he later charges Ben for). However, Martin doesn’t like Ron, and thinks Ron doesn’t know what he’s doing, but secretly, he’s quite jealous of him.

Captain Ron can’t navigate to save his life, and he initially sails them to the wrong island. Annoyed, Martin goes off on a hike. Ron warns him to stay on the main path because of gorillas, but Martin knows gorillas aren’t indigenous to the islands, and doesn’t heed Ron’s warnings. When he goes off the beaten path, he meets gorillas, but they aren’t apes. They are gun-toting revolutionaries, and they capture Martin.

Captain Ron strikes a deal for Martin’s freedom plus some guns to protect them from pirates of the Caribbean in exchange for giving General Armando and his men a ride to a neighboring island. Ron takes them to the wrong island, because he can’t navigate to save his life.

There, Ron jumps into the lagoon to schtup a local mermaid; leaving the Harvey’s with the gorillas alone. After a night of sweet love making, Martin wakes excited that San Juan is only 4 hours away, but Ron gets them lost again, because, well, you know why. They find themselves lost in a storm, but somehow make it to Puerto Rico.

Martin and Katherine are arrested there for smuggling the gorillas, and get kicked off the island, but not before Caroline gets a tattoo in a private area from a man with a spider on his head, In a fit of jealous rage, Martin fires Ron, and sets sail the next day without him.

The Pirates of the Caribbean arrive, and steal the boat. They leave the Harvey’s in a tiny life boat, but they somehow float all the way to Cuba. There, they find the Wanderer docked, and in good condition. Mysteriously, Captain Ron shows up in a stolen car, and creates a diversion to rescue them.

A car chase ensues between them and the pirates. Ron drops off Martin at the Wanderer to get it started while he drives off for another distraction. In the car, Ron overhears Martin’s family talk about how he always screws up even though he tries his hardest.

Not wanting Martin’s family to think poorly of their father, Ron parks the car, and runs off to help him. In the boat, Ron fakes a broken leg to let Martin take control. They barely escape the island, and as they try to put distance between themselves and the Pirates of the Caribbean, the engine blows a bearing because Martin forgot to put oil in it.

The pirates catch up anyway, and fire on the Wanderer. The Coast Guard arrives in the nick of time, and returns fire on the pirates. This scares them off, and allows for the Wanderer’s safe passage to Miami. There, the Harvey’s say goodbye to Captain Ron, and then set sail for their their final destination to the yacht’s brokerage. However, they flip a bitch at the last minute and sail off; keeping the boat.

As the film comes to a close, we see a cleaned up Captain Ron looking like a yuppie, and commandeering a young couple’s motorboat as their captain. Which begs the question. Just who or what is Captain Ron really? Let us know what you think in the comments below.