In Caravan of Courage: An Ewok Adventure, the Towani family’s shuttlecraft crashes on the forest moon of Endor, and the four member find themselves separated. A giant Gorax captures Jermitt and Catarine, the mother and father. The children, Mace and Cindel, aren’t with them when when it captures their parents. The next day, the Ewok Deej is out looking for his two sons when he finds Cindel all alone in the shuttle. Suddenly, Mace appears with his emergency blaster. The younger Cindel convinces her brother that the Ewoks are nice. The Ewoks and the children then go on an adventure to find their parents. 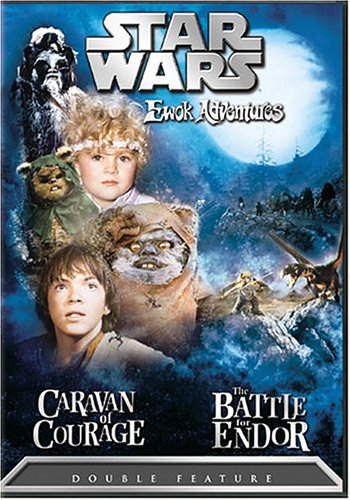 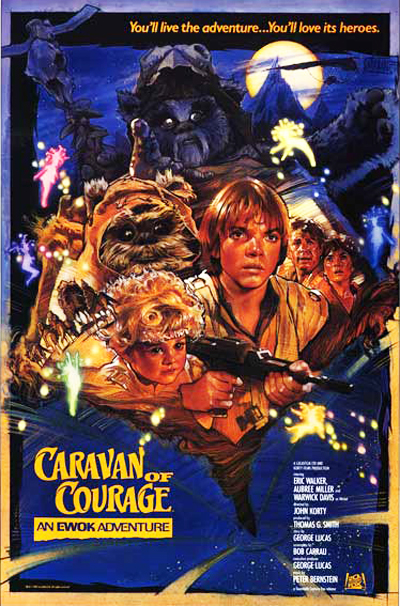 Caravan of Courage: An Ewok Adventure begins on the forest moon of Endor where the Towani family’s starcruiser has crashed. The family is stranded on the primitive planet with little help of rescue. To make matters even worse, the family has been separated during the storm, with the children, Mace and Cindel (Eric Walker and Aubrey Miller) seemingly missing. When their parents go out to look for them, they are captured by the evil Gorax, a tall gangly beast with a club.

The children are actually safe and together. They encounter the Ewoks, the lovely little bear creatures from Return of the Jedi. Initially, Mace is fearful of the Ewoks, so he tries to fight and kill them even though his sister tries to stop him. However, the Ewoks overpower Mace and take him and his now sick sister back their humble home.

Once there, the Ewoks begin to nurse Cindel back to health and Mace begins to understand that the Ewoks are a helpful race. Cindel begins to become friends with the Ewok Wickett (Warwick Davis) and his brother Widdle (Tony Cox). Not long after, the Ewoks help kill a boar wolf that has attacked Mace, and they discover one of the Towani parents’ life monitors attached to the beast.

Convinced that their parents are alive, Mace and Cindel want to set out to find them. They seek out the assistance of Ewok medicine man, Logray (Bobby Bell), who tells them with his grunts and growls that his parents are imprisoned by the Gorax. The Gorax lives in an area on the moon of Endor that no Ewok has ever returned from.

The Towani kids set out for this deserted and dangerous area with a few of their Ewok friends, including Wickett and Widdle. Before they leave, Logray gives them all a magic item that they may need on the trip, including a magic stick for Wickett, a magic candle for Cindel, and a magic rock for Mace. Mace is disappointed in the rock and throws it away immediately, but Wickett picks it up and keeps it for the human male.

They begin their caravan to the lair of the Gorax. Along the way, they befriend an axe-throwing Ewok by the name of Chukha-Trok and a wistie (think Tinkerbell without the trademark infringement) named Izrina. The two new additions join their quest to find the Towani parents. Once they get to the outside of the lair, Mace uses his recovered rock to get in. Once inside, they climb through perilous caves and battle giant spiders before finally making it to the lair of the Gorax.

Upon entering, they free the Towani parents and begin to battle the Gorax. During the battle, Chukha-Trok is killed, but before dying, he bequeaths his axe to Mace. The Gorax is seemingly destroyed when he is knocked into a chasm, but when he climbs back to take on the caravan, Mace uses Chukha-Trok’s axe to deliver the final blow that knocks the creature to his death.

With the family reunited, the Towanis decide to stay with the Ewoks, at least until they can repair their starcrusier. Mace says a tearful goodbye to the wistie Izrina before releasing her to go back to her family. The film ends with some classic Ewok dancing, just like in Return of the Jedi.