Cat on a Hot Tin Roof begins as Big Daddy Pollitt’s family arrives to his and Big Momma’s home. His son Brick is an ex-football player and current alcoholic who spends his time drinking to excess while avoiding his wife, Maggie’s sexual advances. However, this little gathering isn’t so much a festive occasion as it’s a farewell. Apparently, Big Daddy is terminally ill. Both father and son struggle to tell one another how they really feel. Brick, for his part, may also be struggling with his sexuality. 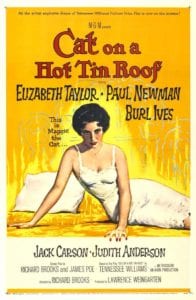 Cat on a Hot Tin Roof begins with Brick Pollitt breaking his leg, late one night, while trying to run hurdles while drunk at the high school football stadium. The next day he wears a cast on that leg when he arrives at his father’s home in Mississippi. His father, Big Daddy, is a self-made cotton tycoon, and is due back from the doctor after a health scare. Big Daddy celebrates his birthday with excitement because he now has a clean bill of health, and expects to live much longer.

This somewhat disappoints Big Daddy’s older son, Gooper. He and his scheming wife lay the false southern charm on thick in an attempt to persuade Big Daddy to leave Gooper in charge of his vast estate. They and their obnoxious, no-neck children can do little more than to annoy Bid Daddy, however.

Meanwhile, it seems that Brick hasn’t given his pretty wife any of the good stuff in some time. His wife is Maggie, a poor but pretty girl who married into money and aims to keep it. She charms Big Daddy as well, who, if nothing else, appreciates her for being good looking. However, the bottle interests Brick a lot more than bootie. He spends all day drinking and refusing Maggie’s pleas for some southern lovin’.

Big Daddy brings his birthday party to Brick’s room and confronts him on his drinking and his lack of procreation. Brink becomes angry and has it out with Big Daddy. Brick blames his alcoholism on the recent suicide of his close friend, Skipper. Skipper jumped out of a window after he didn’t bang Maggie. Skipper called Brick for help, but Brick hung up on him. Brick had been drinking heavily ever since.

Brick and Big Daddy escalate things until Brick tells Big Daddy that his doctor lied to him. He is actually dying. Big Daddy takes it poorly and goes to the cellar to ponder his fate. Brick comes down, and Big Daddy tells him that he intended to leave the estate to Brick, but Brick doesn’t want it. He lashes out and rants about how Big Daddy never showed his family any affection. Big Daddy softens his heart and he and Brick reconcile.

Meanwhile, Gooper has been trying to convince Big Mama, Big Daddy’s wife, to tell Big Daddy to sign over the estate to him. Big Daddy comes upstairs and tells Gooper to back off. Maggie seizes the moment and tells Big Daddy that she is pregnant, which is not true. This delights Big Daddy. Brick and Maggie retire, where Brick finally promises to make good and schtoop Maggie.