In the year One Zillion B.C., lonely outcast caveman Atouk is in love with the beautiful Lana. Lana is the chosen woman of the strong caveman Tonda, the leader of a hostile tribe. Tonda banishes Atouk for his affections, and the outcast must find a way to survive the wild. Aided by his best friend Lar, a vagabond cavewoman Tala, and an ever expanding group of prehistoric misfits, Atouk learns not only how to survive in the wild, but how to evolve into the better man. 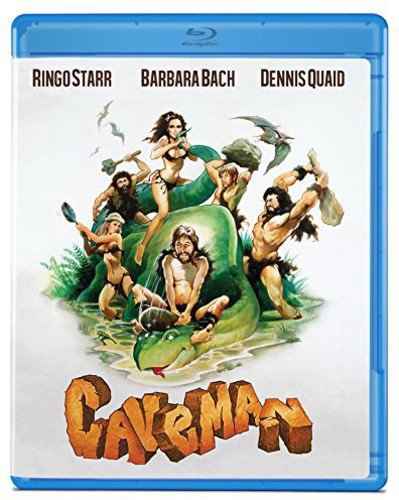 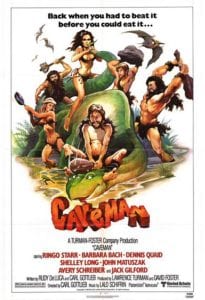 Set on October 8th, One Zillion B.C., Caveman tells the story of Atouk (Ringo Starr), a lonely misfit caveman looking for love in the crazy prehistoric age. As the film begins, Atouk is gathering food with the other men of his tribe. Atouk discovers some berries that when ingested render the eater unconscious. The men of the tribe are attacked by a dinosaur while they are gathering. Atouk’s best friend, Lar (Dennis Quaid), is injured during the attack. The tribe’s brawny leader, Tonda (John Matuszak), orders the men to leave Lar and Atouk is forced to comply.

Back at the cave, Atouk formulates a plan to give the berries to the beautiful Lana (Barbara Bach), the most desired woman in the tribe and Tonda’s chosen mate. Atouk wishes to give Lana the berries so he can have sex with her while she is unconscious. The plan goes awry when both Lana and Tonda eat the berries. Atouk still tries to have sex with Lana while she is unconscious, but he struggles to move the large Tonda off the sleeping woman. Once he moves Tonda, Atouk is so exhausted that he falls asleep between Tonda and Lana. Tonda awakes the next day and finds Atouk in the bed. The larger man chases Atouk from the cave and banishes him from the tribe.

Out in the wild, Atouk comes across Lar hoping through the desert. The two friends run to embrace each other, but when they collide, they straighten each other’s backs out, ridding themselves of the common caveman hunch. Shortly thereafter, Atouk and Lar come across the beautiful Tala (Shelley Long) and the blind Gog (Jack Gilford). Atouk and Lar straighten their backs and save them from a chubby Tyrannosaurus Rex. Eventually, additional scavengers join Atouk’s tribe, including an African American caveman, Bork (Carl Lumbly); an English-speaking Asian caveman, Nook (Evan C. Kim); a little caveman, Ta (Cork Hubbert), and two gay cavemen. One night, Atouk leads the group to shelter during a storm. When lighting strikes the tree they are sheltering in, Atouk’s tribe acquires fire.

Atouk leads his tribe to find food to survive. They discover a large dinosaur egg and begin to take it back to their camp. Tonda and his tribe come along and chase Atouk and his group away so that they may have the egg for themselves. As Tonda’s tribe attempts to take the egg back to their cave, they are attacked by a Pterodactyl. The dinosaur attack causes Tonda’s group to drop the giant egg off a cliff onto a hot springs. Defeated, Tonda’s group leaves the broken egg. However, Atouk’s group discovers that the hot springs has cooked the egg and enjoy a delicious meal before taking the rest of the egg back to the women in their camp.

Tonda’s group follows Atouk’s group back to their camp. Tonda and his men attack the smaller group, but Atouk uses their fire to fend off the attackers. Tonda and his men leave but acquire some of the torches from Atouk’s people. Eventually, Atouk’s fire burns out, and he and Lar return to Tonda’s cave to retrieve their torches. Tala accompanies them, having fallen in to love with Atouk. However, Atouk still desires Lana and is not interested in the fair-haired Tala. Atouk even tries to convince Lana to come with him when he and Lars steal the torches, but she remains with Tonda.

Some time later, Atouk and Lar discover Tonda’s tribe fishing along a river for food. Lana is washed away by the current, but Atouk and Lar save her from drowning. Unfortunately, Lar falls back into the river and is washed away. Tonda believes that Lana has drowned and does not search for her. Atouk takes Lana back to his tribe, where she becomes his woman. However, the men in his tribe wish to save Lar, so Atouk leads a search party for his friend despite Lana’s pleas for him not to. Tala is jealous of Lana and goes to Tonda’s cave to tell him that Lana is alive. She leads Tonda’s men to her camp, where they proceed to abduct everyone and take them back to the Tonda’s cave while Atouk and the other men are away.

Meanwhile, Atouk’s search for Lar leads them to a nearby ice age. They find Lar and an abominable snow monster (Richard Moll) frozen in a cave, presumably in mid chase. The group defrost Lar, but also set the snow monster loose as well. The group runs from the monster and eludes him on a patch of ice. They head back to their camp in the warmer climate.

Once they reach their camp, Gog informs them that Tonda kidnapped all the women. Atouk formulates a plan to get them back, which includes making primitive weapons and wrangling dinosaurs. Atouk and the men attack Tonda’s tribe. Atouk defeats Tonda using the weapons and the dinosaur. After the battle, Lana tries to cuddle up next to Atouk, who takes the vixen in his arms. He drops Lana into a big pile of dinosaur excrement. Atouk recognizes that Tala truly loves him and chooses her as his mate. The pair retreat into the cave as the new leaders of the combined tribes.