In the not-too-distant future, Todd Hewitt discovers Viola, a mysterious girl who crash lands on his planet, where all the women have disappeared, and the men are afflicted by “the Noise” – a force that puts all their thoughts on display. In this dangerous landscape, Viola’s life is threatened – and as Todd vows to protect her, he will have to discover his own inner power and unlock the planet’s dark secrets. From the director of The Bourne Identity and Edge of Tomorrow and based on the best-selling novel The Knife of Never Letting Go. (Courtesy of 3 Arts Entertainment) 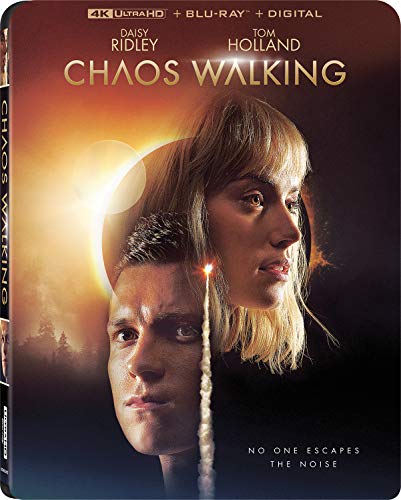 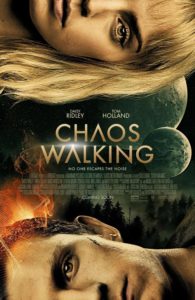 The year is 2258. Colonists from Earth have settled on the planet now known as New World. The settlement of Prentisstown is occupied by all men. The youngest resident is Todd Hewitt (Tom Holland). Todd lives with his adoptive fathers, Ben Moore (Demián Bichir) and Cillian Boyd (Kurt Sutter). Todd’s mother, Karyssa (Bethany Anne Lind), was killed when Todd was a baby, but Todd retains some memories of his mother. All the men on New World are afflicted with a condition called the Noise, an affliction that causes everyone to see and hear each other’s thoughts. The colonists of Prentisstown engaged in a war years before with the native humanoid species known as the Spackle. Todd is informed that his mother and all the other women of Prentisstown were wiped out by the Spackle because they were not afflicted by the Noise.

Prentisstown is inhabited by several other residents: the town’s mayor David Prentiss (Mads Mikkelsen), his son Davy (Nick Jonas), and a half mad preacher named Aaron (David Oyelowo). Prentiss has immense control over his Noise which makes hearing and seeing his thoughts difficult. Prentiss takes an interest in Todd due to the young boy’s control of his noise, and in return, Todd admires David. Todd and Davy do not get along.

You hide your Noise like a woman. Aaron (David Oyelowo)

One day, a scout ship from the long delayed “second wave” of colonists crashes onto the planet. The scout ship was dispatched due to the main ship losing contact with the First Colony years before. The sole survivor of the crash is a young girl named Viola (Daisy Ridley), an explorer who has spent her entire life in transit from Earth. Todd spots Viola stealing from Ben’s barn and chases her into the woods. Todd discovers the crash site and heads into town to tell Prentiss. Todd’s excitement causes him to lose control of his Noise, and he accidentally informs everyone in town. The men from the town ride out to the crash site and begin scavenging the crashed ship for parts. Todd finds Viola and is surprised to learn that she is a girl whose thoughts he cannot read. Viola is captured by the men and brought back to the town.

Viola is brought before Prentiss and questioned about her ship and where she came from. Prentiss explains the Noise to her and what happened to the women of the planet. Prentiss takes a break from the interrogation and leaves Davy in charge of watching Viola. Davy messes with Viola’s bag and inadvertently activates one of her devices which blows several holes in the walls of the building. Viola escapes, but before leaving town, she overhears Prentiss talking with Aaron about his plans to intercept Viola’s ship when it lands and to kill the occupants of the ship while they are still under cryosleep. Viola flees to Ben’s barn at the edge of town where she is discovered by Todd. Ben and Cillian learn of Viola’s existence from Todd’s Noise and decide that Todd needs to take her to another settlement called Farbranch, a settlement unknown to Todd. Ben and Cillian tell Todd that Viola will be safe there and instruct him not to reveal that he is from Prentisstown. Prentiss and the townsmen arrive and surround the barn. Davy kills Cillian, and the shootout causes Viola to flee on an ancient motorcycle. Todd pursues her on horseback while he is chased by a couple of Prentiss’ men.

Todd catches up to Viola after she crashes, and they manage to lose the pursuing townsmen. They begin their journey to Farbranch and are joined by Todd’s little dog Manchee. During the journey, Viola reveals that her ship carries over 4,000 passengers and that her parents died during the journey from Earth. Along the journey, the pair encounter a Spackle who attacks Todd. The boy attempts to kill the alien in self-defense, but Viola stops him from doing so after she notices that the creature does not appear to be dangerous.

Eventually, Todd and Viola arrive in Farbranch which is a quiet farming town occupied by men, women, and children. The townspeople fear Todd because he is from Prentisstown and seek to have him executed. The town’s leader, Hildy (Cynthia Erivo), informs the town that they will not execute Todd due to his young age. Hildy offers Todd and Viola a place to stay with her. Todd finds his mother’s diary in his bag packed by Ben. Viola reads it to him since Todd never was taught how to read. The diary reveals that the women were killed by Prentiss and the other men of Prentisstown and not by the Spackle. The men could not stand not knowing the thoughts of the women which drove them crazy. Todd realizes that everything that he has been told is lie.

A brief time later, Prentiss and his men arrive in Farbranch and demand that the townspeople turn over Viola, who Prentiss accuses of being a spy for the Second Wave. Prentiss uses Ben in an attempt to get Todd to surrender Viola, however, Todd’s adoptive father helps Todd and Viola escape for a second time. On the edge of town, the young pair are discovered by Aaron who pursues them into the forest. Todd and Viola attempt to flee on a boat and get into a struggle with the mad preacher. Aaron kills Manchee, but Todd and Viola manage to escape down river. Todd is enraged at the loss of his dog.

The next day, Viola and Todd discover the ruins of the first colony ship. Viola informs Todd that she can send a signal to her colony ship through the crashed ship’s emergency transmitter. However, the antenna is damaged which Todd repairs. At the same time, the crashed ship is surrounded by Prentiss and his men. Aaron enters the ship and attempts to kill Viola. Viola sets Aaron on fire with one of her devices and burns him alive. Outside, Prentiss threatens to kill Ben if Todd does not surrender himself. Todd surrenders, but Prentiss shoots Ben anyways. Todd goes to help Ben, and the elder man slides a knife to Todd before dying. Todd attacks Prentiss but the mayor uses his Noise to distract Todd. Prentiss shoots Todd, severely wounding him. Prentiss prepares to kill Todd, but Todd uses his Noise to create the illusion of his mother and the other murdered women to distract Prentiss. This allows Viola to push Prentiss off a cliff which kills the murdering mayor.

The second colony ship arrives which scares off the remaining Prentisstown men. Todd falls unconscious from his wounds. A short time later, Todd awakes in the colony ship’s medical bay. His wounds are nearly healed. Viola is watching over him and informs him that she is getting used to the Noise. Viola takes Todd to meet the other arriving colonists.