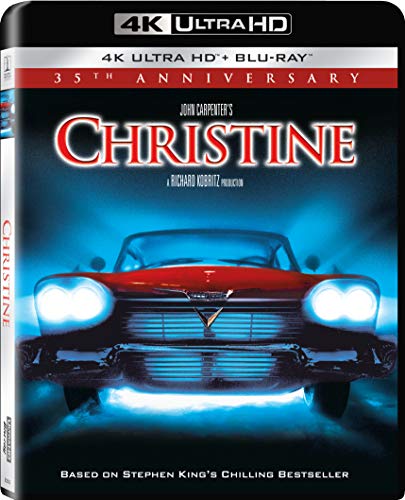 Sony Pictures Home Entertainment has announced that they will release the 1983 horror film Christine onto Blu-ray. The film was directed by John Carpenter and starred Keith Gordon, John Stockwell, Alexandra Paul, Harry Dean Stanton, and Kelly Preston. Christine will be available for purchase online and in stores beginning on September 29.

In the film, geeky student Arnie Cunningham falls for Christine, a rusty 1958 Plymouth Fury, and becomes obsessed with restoring the classic automobile to her former glory. But as the car changes, so does Arnie, and his newfound confidence turns to arrogance behind the wheel of his exotic beauty. Arnie’s girlfriend Leigh and best friend Dennis reach out to him, only to be met by a Fury like no other. The film is based on a novel by Stephen King.

Christine was released December 9, 1983 and went onto gross over $21 million at the box office.

Sony Pictures Home Entertainment has not released any information concerning any special features or technical specifications.

Here is the theatrical trailer for Christine, courtesy of paintnothing.