Matilda Reid is a wealthy, elderly woman who is slightly eccentric. When her nephew Phillip Hasting attempts to convince a judge that she is incompetent and that he needs to manage her large estate, Matilda convinces the judge to hold off making his decision so that he may choose from her three adopted sons whom she promises will return home for the first time in years on Christmas Eve. Each of the three sons have compelling reasons not to return to New York, but will the love of their adoptive mother be too much for them not to? 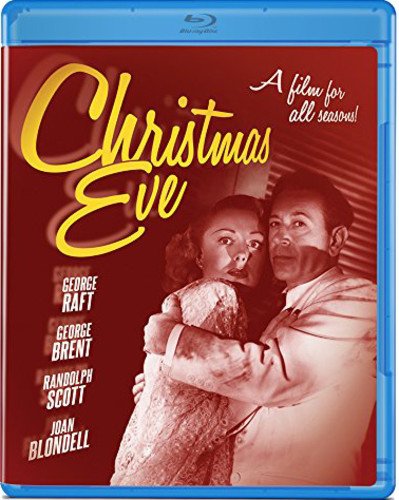 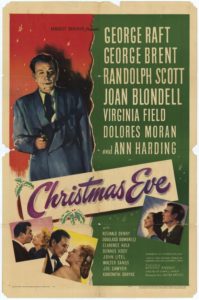 Phillip Hasting (Reginald Denny) is the greedy nephew to his eccentric, but wealthy aunt Matilda Reid (Ann Harding). Phillip is trying to have his aunt judged incompetent so that he can administer her wealth. He brings Judge Alston (Clarence Kolb) and Dr. Doremus (Carl Harbord) to her mansion to conduct the evaluation. Matilda shows her eccentricity by feeding pigeons in the house and using toy trains to feed her “guests”, but she has rational and sentimental reasons for the things she does. Phillip’s major objection is to how Matilda spends her money, specifically spending $1.6 million for catching rats and spending $750 thousand for a marriage camp that only saved one marriage. The judge tries to convince Matilda to let Phillip run her estate, but she states that she doesn’t trust anyone to run her estate but her three adopted sons, Michael Brooks (George Brent), Mario Torio (George Raft), and Jonathan (Randolph Scott).

However, Matilda’s sons all left the house years before, each wishing to make their own way in life without her influence, something that she admires them for. Matilda has not spoken to her sons in years. She tells the judge that if he wants to meet her sons that he can stop by for a drop of punch on Christmas Eve. The judge is extremely skeptical of Matilda and her relationship with her sons.

We next see Michael who is living as a playboy. Michael is bankrupt, but his girlfriend, Ann Nelson (Joan Blondell), is extremely loyal. Ann is jealous of one of Michael’s other lovers and works to sabotage his engagement to the wealthy Harriet Rhodes (Molly Lamont). Michael lies to Harriet and tells her that Ann is his sister. Harriet becomes suspicious of Michael and figures out that he is two timing her. She ends her relationship with Michael much to Ann’s delight.

Phillip comes to visit Michael. Phillip confronts Michael about some bad checks that he has been writing to swing Michael to his way of thinking. He convinces Michael not to show up at Matilda’s house on Christmas Eve, and agrees to pay off Michael’s $75,000 debt in exchange. Ann is delighted that Michael is broke because she believes it will help her keep Michael to herself.

Meanwhile, Matilda leaks the information of Phillip’s attempted takeover of her estate to the tabloids in order to bring her sons home. The newspapers begin to run stories that Matilda’s fortune is in jeopardy due to Phillip’s challenge to her competency. The judge becomes angry with Matilda because of the competency issues becoming public and threatens to hold a hearing. Matilda hires a private investigator named Gimlet (Joe Sawyer) to find her sons. Michael sees the story and begins to feel guilty about his agreement with Phillip. He also fears that Phillip will reveal to Matilda that he wrote the bad checks. Michael decides to confront Phillip at his office but backs off when he realizes that his bad debts may negatively affect Matilda’s case.

Next, we are introduced to Mario who is living in South America with a beautiful woman named Jean Bradford (Dolores Moran). Mario is a shady character who is entangled with a Nazi war criminal named Gustav Reichman (Konstantin Shayne). An FBI agent named Joe Bland (John Litel) shows up at Mario’s office looking for information about a criminal investigation. Mario refuses to turn stool pigeon. Bland informs Mario about Phillip’s intent to seize Matilda’s fortune in the hopes that it will loosen his tongue. Mario can’t go back to the United States due to being wanted for a crime that could result in him being sent to prison for twenty years. Bland offers to make it easier for him to return. Mario throws Bland out of his office but makes plans to return to New York to help Matilda.

As Mario prepares to leave for the United States, he is abducted by Reichman’s men. Reichman is not pleased with Mario’s plans to return to the U.S. He accuses Mario and Jean of stealing $10 million from him. Jean reveals that she took the money and that Mario had nothing to do with the theft. Jean tries to negotiate for Mario’s release, but the Nazi criminal has no intention of releasing either one of them alive. When Reichman’s guards attempt to place Mario in the hold of the boat, Mario frees himself and gets into a shootout with the guards. The bullets hit the engine of the ship which causes a fire. Mario fights his way back to Reichman’s cabin and shoots the Nazi from the air duct. However, Reichman shoots and kills Jean before dying himself. Back in the United States, Gimlet reports Michael and Mario’s predicaments to Matilda who tells Gimlet to continue to look for Johnathan.

A short time later, Gimlet brings some movie footage of a rodeo and states that he believes the allusive Jonathan is one of the riders. Matilda identifies one of the men as her adopted son and orders Gimlet to contact him. On Christmas Eve, Matilda prepares for her adopted sons to return for dinner. She sends her chauffeur to pick up Jonathan at the train station, although Phillip makes an off handed comment about Jonathan’s heavy drinking. Jonathan arrives on the train and meets Matilda’s butler William (Dennis Hoey). Jonathan insists that they stop for a drink, but he keeps an eye on a woman who appears to be following him. The woman’s name is Claire (Virginia Field), who is revealed to be a policewoman in disguise investigating an illegal orphanage.

Jonathan accompanies Claire to the adoption agency. Claire asks him to play her husband for the ruse. He agrees. The doctor in charge of the illegal operation initially refuses to allow them to “adopt” one of the children. The doctor deduces that Claire is a policewoman. The doctor has Jonathan knocked unconscious. When Jonathan comes to, he finds the office cleaned out, Claire missing, and the three baby girls left behind. The police have been called, and Jonathan takes the three girls to Matilda’s house. The police arrive and arrest the doctor and his nurse. They find Claire tied up in a closet. Claire realizes that Jonathan must have taken the children and tracks him down by the license plate of the car.

Jonathan’s arrival throws a wrench in Phillip’s plans. However, Claire arrives at the mansion and tries to convince the Judge that Jonathan is trying to steal the children. Once Jonathan tells Claire that he intends to adopt the children and raise them in the mansion, Claire softens her tone and agrees to go out with Jonathan. At that moment, Michael shows up at the mansion with Ann, who he introduces to everyone as his fiancé. When Phillip tries to embarrass Michael with the information about the bad checks, Michael reveals that he has uncovered that Phillip has been stealing from Matilda. Matilda reveals that she has known about Phillip’s theft, but has chosen not to do anything about it. Mario then shows up at the door of the mansion. He is greeted by Matilda, but Agent Bland also shows up at the same time. Bland allows Mario to spend the evening with his family but tells Matilda that he and Mario will need to leave for Washington that night.

Mario confronts Phillip in private. Phillip was the one who committed the crime that Mario is wanted for. Mario tells Phillip that he needs to leave, hinting that he will live the rest of his life on the run. After Phillip leaves suddenly, Matilda tells Mario that she knows that he was covering for Phillip. The family sits down for dinner and toasts the holidays.