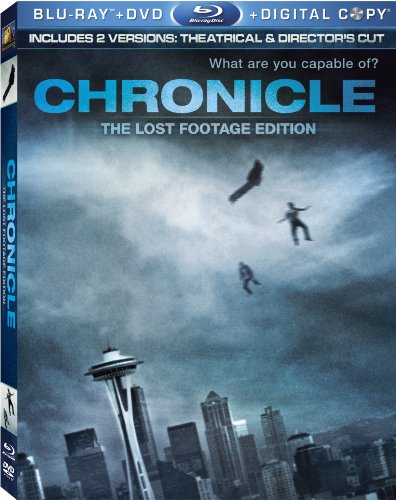 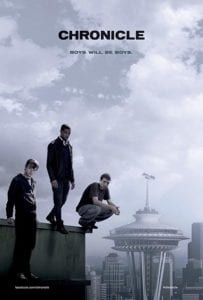 Chronicle is the story of a bullied loner named Andrew Detmer who starts videotaping his life.

Andrew’s cousin, Matt, invites him to a party where popular student, Steve, persuades him to record something that he and Matt found in the woods. The trio finds something mysterious. A couple weeks later the trio record themselves as they display telekinetic abilities. They soon bond over developing their new found powers. Andrew soon starts wondering what it might be like to be the one who holds the threat of violence over others. The boys soon learn they are able to use the telekinesis for flight.

Andrew eventually enters a talent competition at school with Steve. They secretly use their powers to easily win. They go to a party afterwards, and a woman propositions Andrew. She leads him to a bedroom, but he pukes on himself.

More depressed and angry than ever Andrew uses his powers to stop his increasingly abusive father from attacking him, ever as his sick mother keeps taking turns for the worse. His outburst is so extreme it catches Steve’s attention. Steve flies up to Andrew in the middle of a storm. Lightening strikes him, and he dies.

Andrew grows more distant, and he begins to identify himself as an apex predator. This way, he can rationalize his use of powers on all those weaker than him, which is starting to look like everyone. Andrew eventually steals money for medication for his mother. When Andrew is injured in a robbery, his father goes to see him at the hospital. He tells Andrew his mother is dead, and that he blames Andrew for her death. Andrew opens his eyes, and the walls of his hospital room explodes.

Matt senses Andrew is in trouble. He finds and confronts Andrew in a battle in downtown Seattle that shows the extent to which their powers have grown. Andrew is out of control and is intent on destroying everything. Only one person will come out alive!

User Rating: Be the first one !
May 16, 2019
2 minutes read
Show More
Back to top button
Close
Close