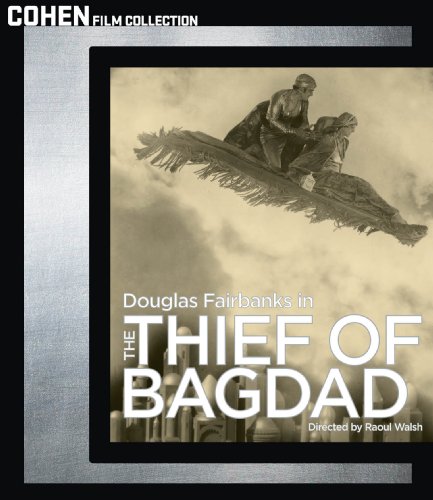 The Thief of Bagdad [Blu-ray]

Cohen Media has announced and detailed the upcoming Blu-ray release of the classic silent era adventure The Thief of Bagdad.  The film is directed by Raoul Walsh and stars Douglas Fairbanks, Snitz Edwards, Charles Belcher, and Julanne Johnston.  The Thief of Bagdad is newly restored and remastered in 2K.  The fantasy epic makes its Blu-ray debut on February 19, 2013.

In The Thief of Bagdad, Fairbanks stars as the dashing Ahmed, a thief who falls in love with the Caliph of Bagdad’s daughter.  The Caliph will give her hand to the suitor that brings back the rarest treasure after seven moons.  The thief sets off on a magical journey while, unbeknownst to him, another suitor, the Prince of the Mongols, is not playing by the rules.

The Thief of Bagdad was released in March of 1924.  One of the biggest blockbusters of the silent era, The Thief of Bagdad is an Arabian Nights adventure set against lush and elaborate backgrounds and massive sets unique for American films of the time, all courtesy of Academy Award-winning production designer William Cameron Menzies.  In 1996, The Thief of Bagdad was selected for preservation in the National Film Registry by the Library of Congress.  In the American Film Institute’s 2008 poll of the creative community, the classic ranked in the Top Ten Fantasy Films of all time.

The Cohen Film Collection’s Blu-ray release features a new presentation restored from two 35mm negatives and incorporating the color tints and tones of the original release prints.  Carl Davis’ score and the film’s soundtrack, meanwhile, is presented via DTS-HD Master Audio.  The Blu-ray releases will includes special features, including: an audio commentary with Douglas Fairbanks Biographer Jeffrey Vance and a featurette discussing the film and its impact, complete with rare behind-the-scenes photos.

Disclaimer: Affiliate links are contained in this post. This means when you click a link, and purchase an item, Movie House Memories will receive an affiliate commission. Advertisers and Affiliate Partnerships do not influence our content. See our Terms of Use about the inclusion of affiliate links on this site for more information.
January 26, 2013
1 minute read
Show More
Back to top button
Close
Close