A Turkish poppy field is torched -and a U.S. drug trafficker known as Mommy is feeling pretty burned. She phones the local cops she owns and orders a retaliatory strike on an inner-city antidrug headquarters. Mommy’s next call should be to 911. Because now she’ll have to mess with Cleopatra Jones. Mommy is relentless in her vendetta — but Cleo responds with catlike karate stealth. Doodlebug, Pickle, Snake and more of Mommy’s offbeat stooges add glide to the story’s stride. Their antics, Mommy’s chortling sleaziness and Cleo’s class shape the power and pizzazz of Cleopatra Jones. (Courtesy Warner Bros.) 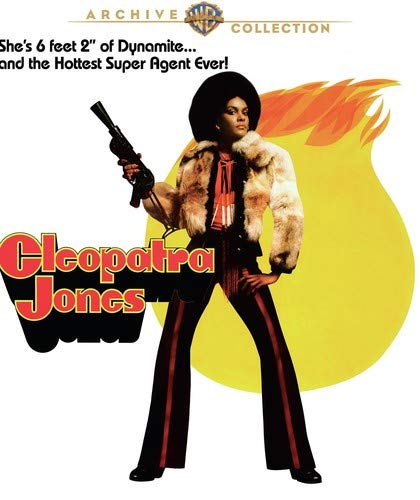 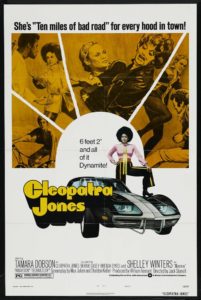 Out in Turkey, US Agent, Cleopatra “Cleo” Jones (Tamara Dobson) arrives to a remote desert location Turkish officials captured. The valley is full of poppies that can be made into millions of dollars of heroin and Cleo orders Turkish officials to burn the field.

Back in Los Angeles, an evil drug lord named Mommy (Shelley Winters) finds out about the destruction, and decides to go after Cleo. To do that, she needs to get Cleo back to the United States, ASAP! She calls in a favor from a corrupt cop named Sergeant Kurt (Stafford Morgan) to raid a local safe home Cleo funds called the B & S House. It helps recovering drug addicts and the police are there to find drugs.

During the raid, one of the officers named Purdy (Bill McKinney) plants a bag of heroin on one of the addicts and arrests him while Cleo’s boyfriend Reuben Masters (Bernie Casey), who runs the place, helplessly looks on.

Cleo flies to Los Angeles on the news only to have Mommy’s goons attack her at the airport. Cleo survives and calls Captain Crawford (Dan Frazer) of the LAPD to set up a meeting. Crawford apologies for the bust and says it never would have happened if he knew about it, but the tips was called in when he was unavailable. He asks her to talk to Reuben because he doesn’t want a local war over the incident. She agrees to help and then meets with Reuben. She asks him to not do anything rash for 72 hours and she will take care of everything.

As she’s about to leave, two of Mommy’s goons show up and a gunfight ensues. They shoot Reuben in the arm, but Cleo takes the two men out as they try to leave a building dressed as old women in a wheelchair.

Cleo takes the wig one of them was wearing and pays Doodlebug Simpkins (Antonio Fargas) a visit. He’s a lower level local criminal who works for Mommy and she questions him about the wig and his involvement of the bag of heroin found at the safe house. Doodlebug says he doesn’t know what she’s talking about and Cleo decides to leave, but before she goes, she says she will be back.

Doodlebug doesn’t want any trouble from Cleo and he goes to Mommy with the wig and quits her operation over it. Later that night, Mommy has her boys kill Doodlebug, his limo driver, and two goons. Only Doodlebug’s girlfriend named Tiffany (Brenda Skyes) survives the crash from two tow trucks smashing into Doodlebug’s car repeatedly. Mommy’s boys shoot Doodlebug dead when it appears he survives the crash.

The next morning, Cleo busts Officer Purdy for selling confiscated guns to Mommy’s goons. When Captain Crawford arrives to take Purdy to jail, he tells her Doodlebug and his men are dead. She asks about Tiffany and Crawford says she survived but doesn’t know where she is.

Cleo finds out from Tiffany’s brother that she’s at a local church. Once there, Tiffany breaks down. As the two are about to leave, Sergeant Kurt shows up with gun in hand and some of Mommy’s goons in tow. He tells Cleo he helps out Mommy from time to time and they are going to pay her a visit.

They head to a local scrapyard where Mommy has her goons throw Cleo and Tiffany in the back of a car to be crushed to death and ground into pieces. As the giant claw lifts the car in the air, Reuben shows up to knock out the claw operator and bring the car back to the ground so Cleo and Tiffany can escape. As Mommy’s goons start to stop him, all the folks at the B & S House arrive with their guns. More drive up in a bulldozer and a fight ensues.

Cleo chases Mommy up one of the cranes and a mini fight erupts between the two. It’s short lived though as Cleo easily tosses her over the side. Mommy falls to her death. Meanwhile, Reuben’s friends round up all the goons including Sergeant Kurt.

We next see a little celebration and going away party for Cleo outside the B & S House. Cleo kisses Captain Crawford goodbye before Reuben escorts her back to her car. The two say their goodbyes and Cleo drives away to her next mission for a happy ending.