11-year-old Davey is a lonely boy. His mother has passed away and his father doesn’t spend time with him. He finds comfort in video games and an imaginary friend who just so happens to be a secret agent. When he accidentally comes into possession of an Atari cartridge which has secret plans on it, a group of spies set out to take them back at any cost. Davey must rely on his wits and imaginary friend to save his hide… that is until his dad turns out to be the real hero. 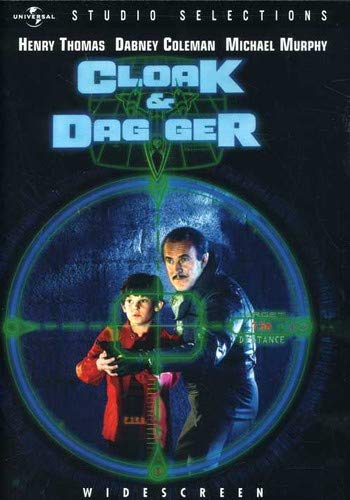 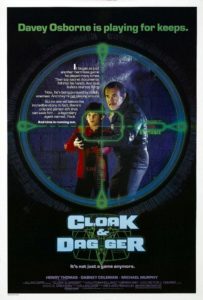 Out in the West, Texas town of San Antonio, 11-year old Davey Osborne (Henry Thomas) lives with his dad, Hal (Dabney Coleman). Not too long ago, Davey’s mother died and Hal’s job as a military air traffic controller leaves Davey alone quite often; making him one lonely little boy. To cope, with his grief and loneliness, Davey has immersed himself an espionage game called Cloak & Dagger. It’s both a role playing game and Atari video game.

Davey has one friend in the world; a little girl named Kim Gardener (Christina Nigra) who lives nearby with her single mother. Alternately, Davey has an imaginary friend from the game named Jack Flack (Dabney Coleman) and Davey mimics his hero with a water pistol as his gun and a softball as his grenade. Most of Davey’s free time is spent imagining fantastic adventures with Jack.

Over in the local mall, a guy named Morris (William Forsythe), who owns a video game shop, sends Davey and Kim on an errand. Along the way, Davey witnesses a murder. As the man dies, he hands Davey a Cloak & Dagger video-game cartridge. However, this is a special copy. He says it contains important military secrets, and to immediately take it to the FBI. Davey does so, but the authorities ignore him, thinking he’s a silly boy playing with them.

Meanwhile, Rice (Michael Murphy) and his group of spies murder Morris and then chase Davey and Kim. Jack helps Davey along the way, but after the spies kidnap Kim and use her as a bargaining chip, Davey decides to hand over the cartridge. However, he must disobey Jack’s order to do so.

As the spies close in on Davey along the River Walk, an an elderly couple, George (John McIntire) and Eunice MacCready (Jeanette Nolan) befriends him. However, Davey runs from them when he sees Eunice has only two fingers on one hand. He’s been previously warned that one of the spies has two fingers missing on her hand.

Two other spies in Rice’s gang, Alvarez (Eloy Casados) and Haverman (Tim Rossovich) almost nab Davey almost capture Davey, but Jack urges him to lure the men into the Crossfire Gambit. This causes the two men kill each other. Jack then convinces Davey to pick up one of the men’s guns for protection. However, Davey can’t shoot Rice when he shows up. Davey panics and runs off towards a dead-end.

Rice corners Davey and begins to taunt him. Davey is still unwilling to shoot, so Jack tries to get Rice’s attention. He stands in front of a blank wall and holds his Agent-X bulletproof beret in front of him for protection. Jack dares Rice to shoot him. Davey warns Jack not to do anything. Rice turns to see who Davey is talking to and fire at the wall where the invisible Jack stands. Davey snaps and shoots Rice dead.

Now Davey is upset that Jack tricked him into shooting, and he tosses the gun away. He takes his miniature of Jack out of his pocket and breaks it. Blood begins to pour from the holes where Rice’s bullets “hit”. Jack falls to the ground near death. Jack tells Davey he was always his favorite playmate. He then asks for a smoke, and fades away into nothing. Davey yells into the night air that he can’t do it alone. Jack’s voice replies he’s always been able to, and now it’s time to save Kim.

George and Eunice have Kim and Davey follows them to the airport as they attempt to flee the country. Inside the airport, Davey tells at them, pretending they are his parents trying to abandon him. When security intervenes, Davey tells the guard he can prove they are his parents and uses the game cartridge they took from him in their bag as proof.

Now cornered themselves, the old folks kidnap Davey and hijack a plane, unaware that Davey brought a bomb with him in his bag; the very bomb the spies planned to use ton Kim. When the two demand a pilot, Davey’s father, Hal, who’s now there with Kim’s mom, Marilyn (Shelby Leverington), volunteers to be the pilot.

The plane begins moving towards the runway, and Davey tries to summon Jack one more time. Hal hears this and identifies himself as Jack Flack; asking Davey to join him in the cockpit. As he does, Eunice discovers the bomb in his bag and panics. She calls out to George for help. This distraction is all Hal needs to get Davey out of the plane through the cockpit window.

Davey runs after the plane, calling for his dad until the plane explodes. The cartridge and the MacCreadys burn in the process. On the tarmac, a lone figure appears from the flames and approaches Davey. While the silhouette is Jack Flack’s, the man is actually Hal.

The two embrace, and Davey asks how he was able to escape. Hal replies, “Jack Flack always escapes.”