On a rainy night, seven unrelated guests gather in a Gothic-style New England mansion. To protect the anonymity of these eccentric invitees, a quirky butler named Wadsworth, and a well-endowed French maid named Yvette, have given them all alias names: Miss Scarlet, Mrs Peacock, Professor Plum, Colonel Mustard, Mr Green, Mrs White, and Mr Boddy. At first glance, nothing seems out of the ordinary. However, when the lights suddenly go out, blood stains the manor’s floor. Now, everyone finds themselves a person of interest in the murder as each of the equally suspicious guests had both a motive and the opportunity to kill the victim. 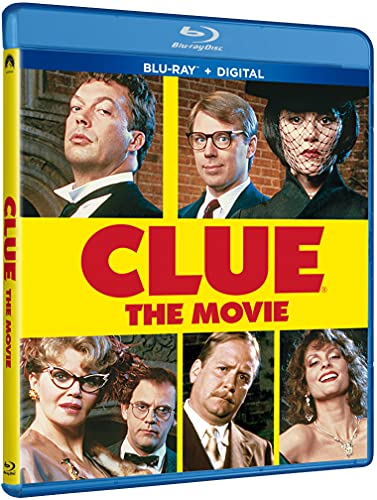 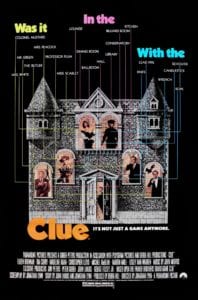 Based on a popular board game, we first see a car arriving at an old mansion on a dark and stormy night as a butler (Wadsworth) feeding some dogs with bones then acknowledging the help inside. The visitors arrive, Colonel Mustard is first, Mrs White is next, Mrs Peacock next, accident prone Mr Green next followed by Professor Plum and Miss Scarlett who met earlier when Miss Scarlett was in need of a lift.

After introductions, dinner is served with an empty seat at the end of the table for the missing guest Mr Body. Discussions over the meal reveal little except they all may have a government linked background. Mr Body arrives instantly ruffling feathers, his instincts tell him to escape but the dogs prevent that. Mr Body is exposed as the blackmailer to them all, retaliating by grabbing his bag and giving each other guest a lethal weapon. Almost immediately the lights go out after Mr Body asks them to kill Wadsworth, only to drop on the floor dead himself when the lights flash back on.

Among themselves, they suspect the cook, running to the kitchen to find her falling out of a cupboard knifed in the back. Returning to see Mr Body’s body missing where they left it, actually turns up dead again when Mrs White goes to the ladies not for wee wee but to powder her nose. With tensions and fright factor high, weapons still within reach, someone at the door wants to use the phone as he explains his car has broken down. Almost forgetting he is there, the group draw matchsticks to team up and search the house for the killer, all still suspecting each other.

While investigating in separate areas the man making the phone call says he’s suspicious to whomever is on the other end also recognizing one of the guests as he’s old boss, he is whacked, also dropping dead and a gloved hand puts the phone back on the receiver.

Discovering his dead triggers more insanity within the group including random shots and a falling chandelier. Told earlier by Wadsworth police were on the way, a separate off duty police officer knocks on door as he noticed an abandoned car up the road, possibly owned by recently deceased visitor.

He is instantly suspicious, goes to call someone on phone which rings, he answers with surprise then goes out letting them know J. Edgar Hoover is on the line. The officer is taken on a grand tour of the house. He ends up dead as does the french maid Yvette and a singing telegram at the door.

Thus, starts the frantic explanation slapstick comedy routines and wild antics of Wadsworth see us through to the end of the film giving viewers three, all crazy, unlikely, alternate solutions in line with the board game.

Yvette once worked as a call girl for Miss Scarlet, and she orders Yvette to murder the cook and Mr. Boddy. Planning to sell the guests’ secrets, Scarlet then kills Yvette and the other victims. As Scarlet prepares to shoot Wadsworth, he reveals there are no more bullets to shoot, and he disarms Scarlet as law enforcement raid the house. The evangelist reveals himself to be the police chief, and he congratulates Wadsworth who is an undercover FBI agent. Wadsworth attempts to demonstrate the revolver was empty, but a remaining bullet brings down the chandelier; narrowly missing Mustard.

Mrs. Peacock killed all the victims to conceal her taking bribes from foreign powers. She holds the others at gunpoint as she prepares to flee the party. Then, Wadsworth reveals he’s an undercover FBI agent sent to investigate her. While heading to her car, the evangelist catches Mrs. Peacock, and reveals himself as the police chief. Then his men arrive to raid the property. After the police chief congratulates Wadsworth, Wadsworth asks if anyone would like some fruit and dessert.

Everyone has killed at least one person aside from Mr. Green. Professor Plum initially missed Mr. Boddy with the gunshot, but later killed him with the candlestick. Mrs. Peacock stabbed the cook who was her old employee. Colonel Mustard bludgeoned the motorist to death because he was his driver during World War II. Mrs. White strangled Yvette out of jealousy and hatred for the Yvette’s affair with her husband. Finally, Miss Scarlet clubbed the cop whom she was bribing.

Wadsworth reveals that he not only shot the singing telegram girl (whom Professor Plum had the affair with), but he’s also is the real Mr. Boddy. The person that Plum killed was Mr. Boddy’s butler. Now with his spies and informants indisposed, he plans to continue blackmailing the guests. Mr. Green then kills Mr. Boddy with his own revolver as he reveals he is actually an undercover FBI agent. He states that he was there to get close to Mr. Boddy. As the authorities arrive to arrest the other, the evangelist reveals that he’s really the police chief.

After mentioning to the police chief that he has killed Mr. Boddy in the hall with his revolver, Mr. Green says, “Okay, Chief, take ’em away! I’m gonna go home and sleep with my wife!”