Thirty years have passed since Prince Akeem Joffer of Zamunda’s adventures in Queens, New York and his marriage to the love of his life, Lisa. He and Lisa have three daughters, but Zamunda’s laws require the path of succession to pass through a male heir. When Akeem’s father, King Jaffe, reveals to Akeem that he has an unknown, illegitimate son in Queens, Akeem sets out to retrieve his son and bring him to Zamunda so that he can become the new prince. However, Akeem finds that integration of his son into Akeem’s existing life may not be as easy as he thought. 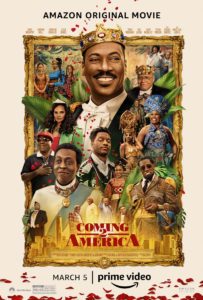 Thirty years have passed since Prince Akeem Joffer of Zamunda (Eddie Murphy) married the woman of his dreams, Lisa (Shari Headley). Akeem and Lisa have continued to live in Zamunda and have had three daughters together, Omma (Bella Murphy), Tinashe (Akiley Love), and their eldest daughter Meeka (KiKi Layne). As the film begins, the couple is celebrating their wedding anniversary when Akeem is summoned to see his father, King Jaffe Joffer (James Earl Jones).

The King informs Akeem that the law requires that Akeem have a son to inherit the throne upon Akeem’s death and because Akeem has had only daughters, he has placed himself in a precarious position. King Jaffe and his shaman Baba (Arsenio Hall) inform Akeem that he sired an illegitimate son thirty years before on his first visit to Queens. Akeem suddenly recalls a night where Semmi (Arsenio Hall) invited two women back to their apartment, and one of the women, Mary Junson (Leslie Jones), drugged Akeem and had sex with him. Akeem did not recall the incident afterwards.

Shortly afterwards, King Jaffe decides to have his funeral while he is still alive. The elaborate affair is narrated by Morgan Freeman with songs sung by En Vogue (Terry Ellis, Rhona Bennett, and Cindy Herron), Salt-N-Peppa (Cheryl James and Sandra Denton), and Gladys Knight. Unfortunately, King Jaffe dies during the funeral just after telling Akeem that he must travel back to Queens and retrieve his son. Suddenly, the weight of the crown is on Akeem’s head.

Zamunda lives under threat of invasion from their neighbor nation Nexdoria and its militaristic dictator General Izzi (Wesley Snipes). General Izzi is the brother of Imani Izzi (Vanessa Bell Calloway), the woman that Akeem rejected to marry Lisa. General Izzi has been pushing Akeem to marry Akeem’s daughter Meeka to his son Idi (Rotimi). Meeka does not wish to marry the foppish Idi, and Akeem does not want to force the issue. However, Izzi threatens war if they countries are not united through a marriage.

After King Jaffe’s funeral, Akeem and Semmi return to Queens to find and meet Akeem’s illegitimate son, Lavelle Junson (Jermaine Fowler). Lavelle still lives with his mother who has been helped by her brother Reem Junson (Tracy Morgan) in raising Lavelle. Lavelle aspires for success and tries to rise out of the slums of Queens but finds himself constantly being judged by his appearance. Lavelle even interviews with the grandson and great nephew (Colin Jost) of Mortimer and Randolph Duke (Don Ameche and Ralph Bellamy), but he does not get the job. Lavelle makes ends meet by acting as a ticket scalper for his Uncle Reem.

Akeem arrives and convinces Lavelle to return with him to Zamunda. Lavelle insists that his mother accompany them. Once in Zamunda, Lavelle and his mother receive a chilly reception from Lisa and Akeem’s daughters, who also were unaware of his existence. Akeem announces that Lavelle is the new heir to the throne, which disappoints Meeka who has been preparing her whole life to succeed Akeem. Lavelle struggles to adjust to life as the Crown Prince. However, he befriends the royal groomer, Mirembe (Nomzamo Mbatha), who encourages Lavelle to abandon Zamunda’s traditions and to follow his own path, much like Akeem did when he married Lisa.

At the same time, General Izzi learns of Akeem’s son and offers his daughter Bopoto (Teyana Taylor) as a bride for Lavelle to maintain the peace. Lavelle expresses his interest in the extremely attractive Bopoto, but Baba reminds Akeem that Lavelle must pass a series of traditional tests to qualify as a royal prince. Izzi gives Akeem one week to prepare Lavelle or the countries will be at war. Akeem and his family assist Lavelle in preparing himself for the tests. Lavelle and Meeka begin to understand each other and cooperate with each other to ensure Lavelle passes the most dangerous test, cutting the whiskers off a lion. Lavelle passes the tests and becomes the official Prince of Zamunda. However, he finds himself attracted to Mirembe, but he is rejected by the royal groomer after kissing her due to his betrothal to Bopoto.

A few nights later, an engagement party is held for Lavelle and Bopoto. At the party, Lavelle overhears a conversation between General Izzi and Akeem that makes him believe that Akeem is exploiting him to protect the throne and Zamunda. Lavelle takes his mother, his uncle, and Mirembe back to Queens with plans to marry the woman that he loves. Lisa, who has befriended Mary, becomes upset with Akeem for abandoning his progressive ideals now that he has become the King. Lisa kicks Akeem out of the royal bedroom. Lost, Akeem visits his friend Maurice (Louie Anderson) and Lisa’s father Cleo McDowell (John Amos) at the Zamunda branch of McDowell’s. Cleo reminds Akeem of his late mother, Queen Aoleon’s (Madge Sinclair) progressive mind. Akeem flies to Queens to retrieve his son. Before leaving, Akeem asks Semmi to protect the royal family and to stall Izzi until Akeem can return.

Once in Queens, Akeem stops the wedding between Lavelle and Mirembe in front of Reverend Brown (Arsenio Hall). Lavelle tells his father how much he loves Mirembe which reminds Akeem of his own love story with Lisa. Akeem allows the couple to wed with his blessing and relieves Lavelle of his royal obligations. At the same time, Semmi and the princesses fight off and subdue General Izzi, forcing him to take a more diplomatic approach to the situation.

Once Akeem returns to Zamunda, he changes the law concerning royal succession and makes it possible for Meeka to ascend to the throne upon his death. Lavelle is formally made an ambassador of Zamunda in New York. Akeem and General Izzi formalize a trade deal between Nexdoria and Zamunda, establishing a peaceful coexistence. The film ends with a grand party at the royal palace with all of Akeem’s friends from Queens in attendance, including the barbershop, and a performance by Sexual Chocolate (Eddie Murphy).