Conan and his buddy, Malak, must escort Queen Taramis’ virgin niece, Princess Jehnna and her bodyguard to a mystical island fortress. Once there, they are to retrieve a magical crystal that will help find a horn that legend says can awaken the god of dreams, Dagoth. Along the way, Conan reunites with the wizard, Akiro, and befriends a female fighter named Zula. 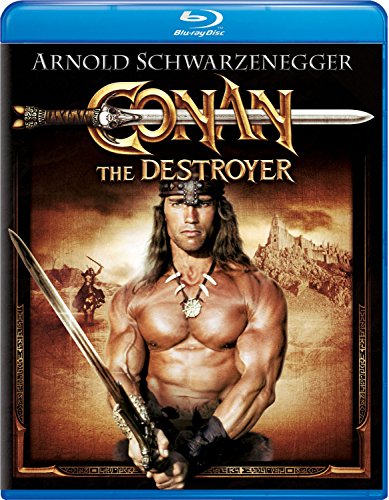 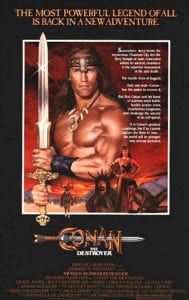 Conan the Destroyer begins when the evil queen of Shadizar confronts Conan and his fellow traveling thief, Malak. After Conan slaughters about a dozen of the queen’s guards and gives a horse a Mongo-of-Blazing-Saddles punch, the queen tells Conan that she has a quest for him: Conan must find and return to the queen the horn that will resurrect the god Dagoth. After brief haggling, Conan agrees to complete the quest in exchange for the queen’s promise to bring back to life Conana’s lost love, Valeria.

Conan only needs to escort the queen’s virgin niece, Jehnna, to the magic gem and the horn of Dagoth. To ensure that her niece remains a virgin, the queen entrusts Wilt the Stilt Chamberlain, the man who bedded 20,000 women, to accompany Jehnna, Conan, and Malak. This the first of many poor choices the queen makes. Unbeknownst to Conan, once he obtains the magic gem, Chamberlain must murder him.

Conan’s quest is difficult. A powerful wizard guards the magic hidden within a fortified castle. Conan and his band of seekers happen upon a group of cannibals that have somehow managed to capture Conan’s favorite wizard, Akiro. Conan rescues Akiro, and Akiro agrees to help Conan with his quest; although, if Akiro’s spells are no match for primitive savages, how much help will he be to Conan?

Along the way, Conan rescues Grace Jones from a mob of village idiots. Thus, Conan is responsible for perpetuating one of the greatest mysteries of the 1980s: Grace Jones’ popularity. The adventurer-thieves soon find the castle hiding the magic gem. Too tired to do any more beheading or horse punching, Conan decides to set up camp for the night. While the gang are sound asleep, the wizard guarding the gem turns himself into a giant bird and kidnaps the sleeping Jehnna. The others awake, discover Jehnna’s plight, and plot her rescue.

After reaching the castle, Conan finds himself trapped alone inside a hall of mirrors. There, Conan must battle a fierce ape-man. During the battle, Conan cleverly realized that breaking the mirrors destroys the ape-man. Conan dispatches the ape-man and, while doing so, kills the evil wizard. These events, and cheap scenery, cause the castle to begin to crumble. Conan and his companions escape with the gem, but not before having to fight off an ambush by the queen’s guards.

Magic gem in hand, Jehnna leads the gang to the temple hiding the horn of Dagoth. Jehnna seizes the horn. Meanwhile, Akiro learns Jehnna will be ritually sacrificed to Dagoth. The guards ambush Conan and his gang again. This time, Wilt Chamberlain succeeds in blocking Conan and the others’ escape with Styrofoam boulders. Chamberlain rides off with Jehnna and the horn. After removing the boulders, Conan and the others escape and rush to rescue Jehnna.

They arrive at the queen’s castle, just in time for Jehnna’s ritual sacrifice party. Conan realizes the evil queen will not fulfill her promise to reunite him with Valeria. So first he avenges Wil Chamberlain’s treachery by doing his best Bill Russell impression. Next, Grace Jones throws a giant pencil through the heart of Jehnna’s executioner.

However, Dagoth is not satisfied with these sacrifices, and so he resurrects in the form of Andre the Giant dressed as a Rancor. Dagoth kills the evil queen. Conan battles Andre the Rancor Dagoth, finally destroying him by taking Akiro’s advice and tearing off the god’s horn.

The story ends with the newly crowned queen, Jehnna. She rewards her rescuers with sinecures in her new court. However, forever loyal to his long-lost Valeria, Conan declines Jehnna’s marriage proposal and exits the castle to a life of more wandering.

The final scene is of Conan, alone in Rodin’s Thinker pose, melancholy and reflective. Perhaps his future will involve finding a kingdom in California – and perhaps the maid will be a substitute for Valeria.