The Old West, where a lone cowboy leads an uprising against a terror from beyond our world. A stranger with no memory of his past stumbles into the hard desert town of Absolution. The only hint to his history is a mysterious shackle that encircles one wrist. What he discovers is that the people of Absolution don’t welcome strangers, and nobody makes a move on its streets unless ordered to do so by the iron-fisted Colonel Dolarhyde.

It’s a town that lives in fear. But Absolution is about to experience fear it can scarcely comprehend as the desolate city is attacked by marauders from the sky. Screaming down with breathtaking velocity and blinding lights to abduct the helpless one by one, these monsters challenge everything the residents have ever known. Now, the stranger they rejected is their only hope for salvation. As this gunslinger slowly starts to remember who he is and where he’s been, he realizes he holds a secret that could give the town a fighting chance against the alien force.

With the help of the elusive traveler Ella, he pulls together a posse comprised of former opponents-townsfolk, Dolarhyde and his boys, outlaws and Apache warriors-all in danger of annihilation. United against a common enemy, they will prepare for an epic showdown for survival. 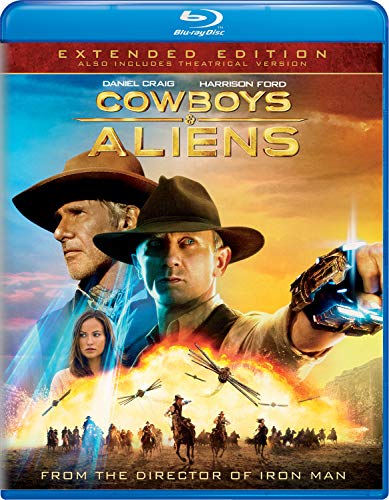 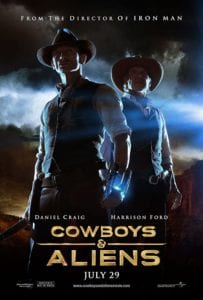 Jake Lonergran (Daniel Craig) awakens in the desert of the New Mexico Territory in 1873 with no memory of who he is or how he got there. He also has an incision in his right side and a strange metal bracelet attacked to his left wrist. After dispatching three random bounty hunters, he wanders into the town of Absolution. He breaks into the town church where he is held at gunpoint by preacher Meacham (Clancy Brown). Meacham cleans and sews up Jake’s stomach wound.

After he is patched up, gunshots coming from the town draw the two men out to the street. There, they find the petulant Percy Dolarhyde (Paul Dano) in a confrontation with the local saloon owner and part time physician Doc (Sam Rockwell) over Percy’s outstanding bar debt. Jake intervenes in the dispute and Percy ends up shooting a deputy sheriff by accident. Sheriff John Taggert (Keith Carradine) arrests Percy despite the fact that it will put him at cross purposes with Percy’s father, the ruthless cattle baron Colonel Woodrow Dolarhyde (Harrison Ford).

Taggert recognizes Jake from a wanted poster and attempts to arrest him at the saloon. Jake is able to disarm almost all of the sheriff’s men, but he is knocked unconscious by the mysterious Ella Swenson (Olivia Wilde). Shortly thereafter, Taggert places Jake and Percy into a jail transport to turn them over to the Marshalls. The Colonel shows up to help his son, and discovers Jake in the transport. The Colonel orders Jake to be released to him as well since he believes Jake stole gold from him. Taggert refuses to release either man and a standoff ensues.

However, the standoff is interrupted by an attack by alien spacecraft. The ships fire lasers to blow things up, but they also begin abducting several members of the town, including Sheriff Taggert, Percy, and Doc’s wife Maria (Ana de la Reguera). Jake is freed from the paddy wagon during the attack and his bracelet comes to life. Jake learns that he can fire lasers from his bracelet and shoots down one of the spacecraft. The remaining ships retreat with their prisoners. The pilot of the shot down craft escapes and Dolarhyde, Doc, Ella, and several other townspeople form a posse to track the injured alien and recover their loved ones.

Meanwhile, Jake travels to an abandoned cabin and begins to recall some of his memories in flashbacks. He recalls bringing stolen gold back to the cabin to his girlfriend named Alice (Abigail Spencer). He also recalls that he and Alice were abducted by the aliens at the cabin and taken back to the spacecraft where the aliens performed experiments on them. Jake joins the posse in its quest to free the prisoners. That evening, they find a capsized paddle wheel steamboat several hundred miles from a river. They group spends the night in the boat where they are attacked by an alien. The alien kills Meacham who sacrifices himself to save Taggert’s young grandson, Emmett (Noah Ringer).

The next morning, most of the posse has deserted or is dead, but Jake and the Colonel continue on. They encounter Jake’s former gang who attempt to rob them, but Jake reasserts control for a brief period of time. Once they are taken back to the main camp, the new leader of the gang, Pat Dolan (David O’Hara) refuses to follow Jake since he stole the gold from their last heist. The men get into a fight, but Jake is able to get the better of Pat with his laser bracelet. Jake’s posse rides off, pursued closely by his former gang.

Another group of alien ships attack both groups and begin abducting more people. Ella is taken, and Jake jumps aboard the ship and attacks the alien pilot. The ship, with Jake and Ella, crashes in a nearby river. The two humans swim to shore, but they are attacked by the pilot who also survived. Ella is mortally wounded, but Jake is able to kill the alien with his laser bracelet. Jake takes Ella’s body back to the posse, which now finds itself surrounded by Chiricahua Apaches. The Apaches blame the white people for the alien attacks and the abduction of their people as well.

They are taken back to the Apache camp. The Colonel’s right hand man, Nat Colorado (Adam Beach), acts as an interpreter since he was born Apache, but raised by the Colonel. The Apaches drop Ella’s corpse into the fire, but the fire reanimates Ella’s now nude body. Ella reveals that she is the last survivor of another alien race and that she is seeking revenge against the aliens that are abducting the humans. She also reveals that Ella’s body is not her natural form. She tells everyone that the aliens are mining the gold from area and experimenting on the abducted humans.

The Apaches and the Colonel’s group put aside their sizeable differences and decide to join forces to free all of the abducted people. Ella tells Jake that he knows where the alien ship is, but Jake cannot remember. The Apaches give him a concoction that allows Jake to recover his memory. Jake remembers that Alice was vivisected and euthanized in the ship, but he was able steal a bracelet and escape. Everyone rides to the canyon where the alien ship is. The humans realize that they don’t have enough men to win, and Jake rides off to recruit his old gang, who reluctantly join him in his quest.

The combined forces use a distraction to lure the alien forces out of the ship and into open ground where the odds are a little more even. Meanwhile, Jake and Ella enter the ship through a secret entrance and free all the imprisoned humans. Jake is able to get everyone out, but he goes deeper into the ship with Ella with the plan to destroy the ship. Ella is able to get the bracelet off of Jake’s wrist and tells him that the bracelet is the key to the alien ship’s destruction. Ella goes further into the ship, pursued by aliens, while Jake fights several aliens. Jake is ultimately captured and is about to be killed when he is saved by the Colonel. The two men escape from the ship right before it takes off. Once in the sky, Ella detonates the bracelet in the ship’s core, which destroys the entire ship.

In the aftermath, the rescued townspeople slowly begin to remember their pasts. Percy becomes a better person, and Doc reunites with his wife. Taggert and the Colonel agree to say that Jake was killed by the aliens, allowing Jake to begin a new life for himself. Jake leaves the town for places unknown.