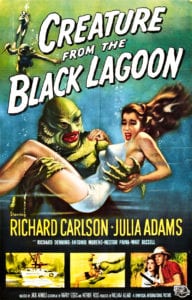 Universal Pictures released Creature from the Black Lagoon on March 5, 1954 in 3D. Jack Arnold, who made It Came from Outer Space the year before in 3D as well, directed the film. Unfortunately, the 3D film craze was almost over when Creature from the Black Lagoon was released. Most audiences saw the film in 2D unless you lived in a large city. You might have had a choice between the two formats.

Creature from the Black Lagoon starred Richard Carlson as Dr. David Reed, Julie Adams as Kay Lawrence, Richard Denning as Dr. Mark Williams, and Nestor Paiva as Captain Lucas. Ricou Browning played the Gill-man in three of the creature films; Creature from the Black Lagoon, Revenge of the Creature, and The Creature Walks Among Us. Henry Mancini, of The Pink Panther and Breakfast at Tiffany’s fame, is uncredited with his musical score for the film.

Deep in the Amazon, Dr. Carl Maia and his expedition find a fossilized hand with webbed fingers. Maia takes the hand to Dr. David Reed, an ichthyologist who is his former student. Dr. Reed persuades his greedy boss, Dr. Mark Williams, to finance a followup expedition to uncover the rest of the skeleton.

He agrees, and they head back on the steamer named Rita. Once at the site, they discover that the old team of researchers has been mysteriously killed. They blame it on jaguars, but we know the truth!

The expedition soon digs in the area where the hand was discovered, but after a number of days, nothing turns up. Mark wants to cut his losses and return home, but David hypothesizes that the nearby lagoon might have caught residual bones from erosion.

The boat’s captain, Lucas, calls the lagoon, “The Black Lagoon” and proclaims it a paradise that nobody has ever returned from. This odd warning doesn’t stop the scientists who order Lucas to take them to the lagoon.

Once there, they come face to face with the Gill-man who wants to kill all of the men, and make Kay his. Will the scientists capture the creature? Will the creature kill them first? Is Kay due for a mouth full of fish lips? Watch the movie to find out!

Creature from the Black Lagoon is billed as a horror film. By today’s standards, it’s mildly suspenseful. The Gill-man costume is very outdated, and nearly 70 years after it’s release, it has been thoroughly copied and lampooned. That said, this is the original, and there is a certain charm knowing that.

You won’t find terribly strong performances in this film. There’s nothing exceptional about them, but the actors do a sufficient enough job with the roles they have been given. My only call out is Julie Adams’s shriek whenever danger is near gets old pretty quick. However, isn’t that scream what good horror films from the 1950’s are all about?

This film is pretty dated now, but its camp and 1950s charm has made it the cult film it is today. At an hour and nineteen minutes, it’s a fun watch on a late night. Add this one to your list of films to see.

A prehistoric creature lives in the depths of the Amazonian jungle. A group of scientists try to capture it, and bring it back to civilization for study.