Set the near the turn of the 20th Century, Crimson Peak tells the story of an independent, free thinking woman named Edith Cushing, a young woman who has been haunted by ghosts her entire life. After her father’s death, Edith marries an English baronet named Thomas Sharpe who takes Edith to live in his family’s estate in England with Thomas’ sister Lucille. Once there, Edith begins to have more frequent visions of ghosts of who continually warn her to ‘beware of Crimson Peak.” 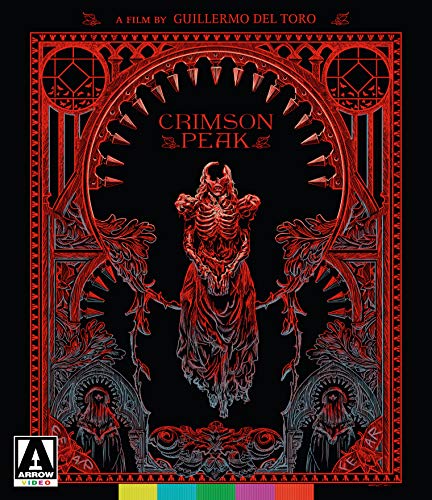 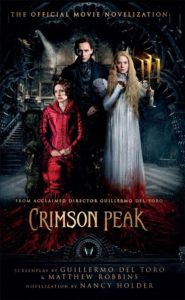 The year is 1887. In Buffalo, New York, a young Edith Cushing (Sofia Wells) is the daughter of wealthy businessman Carter Cushing (Jim Beaver). Shortly after Edith’s mother’s death, Edith is visited in the night by the ghost of her mother who warns her to beware of Crimson Peak.

Fourteen years later, a now adult Edith (Mia Wasikowska) is an independent, free thinking woman who dreams of becoming a writer. She constantly encounters people who believe that women should not write the things that Edith concocts, including her father. One day, Edith meets Sir Thomas Sharpe (Tom Hiddleston), an English baronet, who has come to America to seek financing for a revolutionary digging machine that Thomas believes will revive his family’s defunct clay mines in England. Thomas is accompanied on his journey by his sister Lucille (Jessica Chastain). Thomas meets with Carter and proposes a business merger, but Edith’s father is unimpressed with Thomas’ proposal and rejects the idea.

At the same time, Edith and Thomas become attracted to each other and eventually become romantically involved. Thomas asks his sister for her ring, a family heirloom that Thomas intends to use as an engagement ring for Edith. Lucille turns the ring over but tells her brother that she expects to get the ring back. However, Carter hires a private investigator named Mr. Holly (Burn Gorman) to look into the Sharpe siblings’ backgrounds. Mr. Holly discovers something, and Carter confronts Thomas and Lucille with the information. Carter demands that Thomas break off his relationship with Edith in such a way that her heart will be broken forever. In exchange, Carter provides Thomas and Lucille with a financial payoff. Thomas agrees and disparages Edith’s novel before announcing his intent to return to England.

Ghosts are real, that much I know. I’ve seen them all my life… Edith Cushing (Mia Wasikowska)

However, the next day Edith’s manuscript is returned with a note from Thomas explaining his actions. Edith and Thomas reconcile with Edith accepting Thomas’s marriage proposal. At the same time, Carter is brutally murdered in the restroom of his exclusive club. The murder is made to look like a horrible accident. Edith’s childhood friend, Dr. Alan McMichael (Charlie Hunnam), is suspicious of the accident and believes that the Sharpes may have been involved. Edith dismisses Alan’s suspicions that her father’s death was no mere accident, although Alan does not articulate his thoughts as to the Sharpes to her.

Following her father’s funeral, Edith marries Thomas and the couple immediately leave for England. Weeks later, they arrive at Allerdale Hall, Thomas’ family estate, in Cumberland, England. Allerdale is run down and falling apart and contains many dangers. Thomas explains how the mansion is slowly sinking into the clay that lies beneath the mansion. Lucille lives in the mansion as well but does not give Edith unfettered access to the home. Lucille treats Edith coldly and constantly has Edith drinking a specialized tea made from firethorn berries that Edith does not care for. Thomas becomes distant from Edith as he constantly works on his experimental digging machine and spends almost no time in the marital bed. Despite Thomas continually asking for Edith to obtain the first half of her father’s estate for his digging machine, Thomas and Edith’s marriage remains unconsummated.

As fall turns into winter, snow begins to settle on the ground around the estate. The red clay bleeds through the white snow, and Thomas informs Edith that the estate is referred to as Crimson Peak because of the phenomenon. Suddenly, Edith remembers the warning from the ghost of her dead mother. As the time passes, Edith continues to grow sick and weak. She frequently coughs up blood and she continually sees images of gruesome skeletal ghosts around the interior of the Allerdale estate. One of the ghosts tricks her into opening a closet where she finds wax phonograph cylinders, and another ghost chases her into the cellar where she finds a locked trunk with the name “Enola” engraved on it.

One day, Thomas and Edith go into town. Edith is provided a letter from Italy addressed to E. Sharpe that both the postal clerk and Edith believe is for her. Thomas and Edith become stranded for the night in town due to the snow, so they decide to stay the night in a hotel together. The couple finally have sex and consummate their relationship. The next day when they return to Allerdale, Lucille is angry at her brother for his absence overnight and becomes furious at Edith upon learning that the married couple slept together.

One day, Edith steals a key from Lucille’s key ring that is labeled Enola. Edith uses the key to unlock the trunk in the cellar where she finds a gramophone. Edith uses the gramophone to play the wax cylinders from the closet. Edith learns from the letter and the cylinders that Thomas has previously been married to three other wealthy women, one of which was named Enola. Edith begins to suspect that Lucille is poisoning her with the tea, and that Thomas and Lucille are using her to acquire her family fortune before killing her. However, Edith is somewhat thrown for a loop when Thomas tells her to stop drinking the tea. Nevertheless, Edith goes to confront her husband and sister-in-law with her suspicions, but she catches the two of them in bed together. With their secret revealed, Lucille pushes Edith from a balcony despite Thomas’ pleas to stop. Edith is not killed and merely suffers a broken leg.

Meanwhile, Alan continues to investigate the Sharpes back in the United States. He learns about Thomas’ multiple marriages and that Lucille spent time in a mental hospital following the death of her mother from Carter’s private investigator Mr. Holly. He sets out for England to save Edith and arrives just after she is pushed from the balcony. Alan treats Edith’s injury, but insists on taking her back into town despite a winter storm. Lucille refuses and stabs Alan in the underarm. Lucille orders Thomas to finish Alan off to show his loyalty to her. However, Thomas has grown tired of Lucille’s controlling ways and has fallen in love with Edith. So, Thomas only feigns killing Alan and merely gives him a non-life-threatening wound to the stomach.

Lucille forces Edith to sign a transfer deed granting the Sharpes ownership of her entire estate. Lucille confesses to murdering Edith’s father and her own mother after she discovered Thomas and Lucille having sex with each other. Edith stabs Lucille and attempts to flee Allerdale on her broken leg. Thomas returns and burns the signed transfer paperwork. He begs Lucille to leave with him and to begin a new life together. However, Lucille realizes that Thomas is in love with Edith and wants her to come with them as well. Lucille stabs her brother in the face, killing him, before she sets out to kill Edith. Lucille and Edith battle each other in the snow and clay. Thomas’ ghost appears and momentarily distracts Lucille allowing Edith to kill Lucille with a shovel. Edith silently bids Thomas farewell before he vanishes.

A short time later, Edith and Alan are rescued by the villagers. Lucille becomes the black ghost of Allerdale Hall, trapped in the mansion, playing her piano for eternity. The end credits imply that Edith writes a novel about her experiences called Crimson Peak.