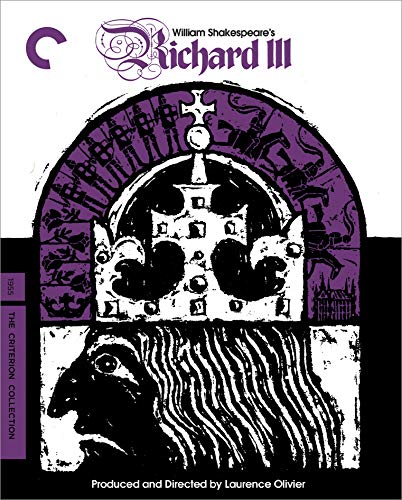 In the film, Richard’s military skills have helped to put his older brother Edward on the throne of England.  But jealousy and resentment cause Richard to seek the crown for himself, and he conceives a lengthy and carefully calculated plan using deception, manipulation, and outright murder to achieve his goal.  His plotting soon has tumultuous consequences, both for himself and for England.

Richard III was released in April of 1955 and grossed over $2.6 million at the box office in the United States alone.  Olivier was nominated for Best Actor in the 1956 Academy Awards for his performance in the film.

As with all Criterion Collection releases, the Blu-ray will include several special features, including: a new high-definition digital master of the Film Foundation’s 2012 restoration, with uncompressed monaural soundtrack on the Blu-ray edition; an audio commentary by playwright and stage director Russell Lees and John Wilders, former governor of the Royal Shakespeare Company; an interview with actor Laurence Olivier from a 1966 episode of the BBC series Great Acting, hosted by theater critic Kenneth Tynan; a gallery of behind-the-scenes and production stills and posters, accompanied by excerpts from Olivier’s autobiography, On Acting; a twelve-minute television trailer featuring footage of Olivier, producer Alexander Korda, and other cast and crew from the film; the theatrical trailer; and a booklet featuring an essay by film critic Amy Taubin.

Disclaimer: Affiliate links are contained in this post. This means when you click a link, and purchase an item, Movie House Memories will receive an affiliate commission. Advertisers and Affiliate Partnerships do not influence our content. See our Terms of Use about the inclusion of affiliate links on this site for more information.
January 28, 2013
1 minute read
Show More
Back to top button
Close
Close