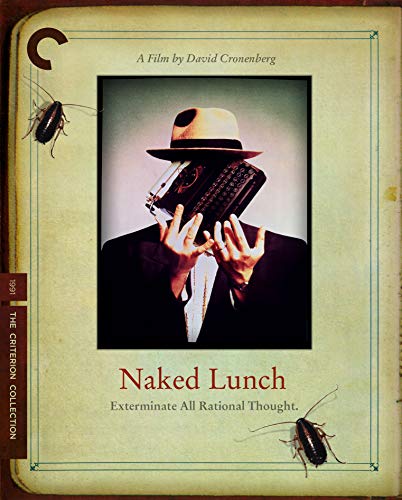 The Criterion Collection has announced the Blu-ray release date for Naked Lunch.  The film, which was written and directed by David Cronenberg and stars Peter Weller, Judy Davis, Ian Holm, Julian Sands, and Roy Scheider, will be available for purchase on Criterion Blu-ray on April 9, 2013.

In this adaptation of William S. Burroughs‘s hallucinatory, once-thought unfilmable novel, a part-time exterminator and full-time drug addict named Bill Lee (Weller) plunges into the nightmarish Interzone, a netherworld of sinister cabals and giant talking bugs.  Alternately humorous and grotesque—and always surreal—the film mingles aspects of Burroughs’s novel with incidents from the writer’s own life, resulting in an evocative paranoid fantasy and a self-reflexive investigation into the mysteries of the creative process.

Naked Lunch was released in December of 1991 and grossed over $2 million at the box office, but developed a cult following upon its release on video the next year.

As with every Criterion Blu-ray release, the film will also include several special features, including: a high-definition digital transfer, approved by director Cronenberg, with 2.0 surround DTS-HD Master Audio soundtrack; an audio commentary featuring Cronenberg and Peter Weller; Naked Making Lunch, a 1992 television documentary by Chris Rodley; a special effects gallery, featuring artwork and photos alongside an essay by Cinefex magazine editor Jody Duncan; a collection of original marketing materials; an audio recording of William S. Burroughs reading from his novel “Naked Lunch”; a gallery of photos taken by poet Allen Ginsburg of Burroughs; and a booklet featuring reprinted pieces by film critic Janet Maslin, director Chris Rodley, critic and novelist Gary Indiana, and Burroughs himself.