In Cry Baby, Allison is a square, goody two shoes who decides she’s going to be bad for a change. That’s when she gets a hunk, a hunk of burning love for a Drape named Cry-Baby Walker. Even though he’s a bad boy, he has a heart of gold and falls for Allison too. However, after she dumps her equally square boyfriend for him, the ex sets out for revenge ’50s style! 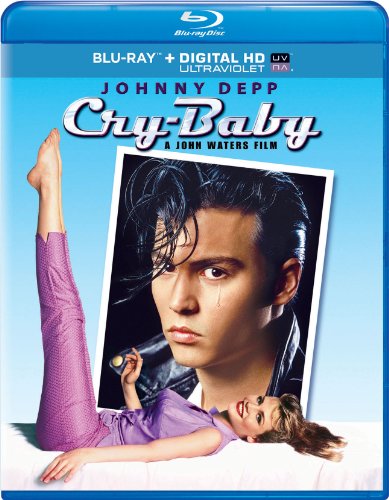 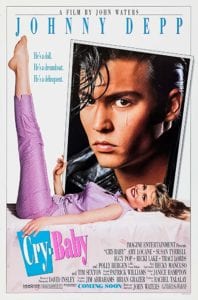 Hang on to your tongue! Cry-Baby, written and directed by cult-film legend John Waters, is a steamy, silly, super campy omage to the hep 1950’s. In this leather-clad Romeo & Juliet, drape Cry-Baby (Johnny Depp) and square Allison fall for each other over a polio inoculation. One look at the boy’s lonely teardrop and Allison (Amy Locane) declares, “I’m so tired of being good!” and dumps her square boyfriend Baldwin (Stephen Mailer).

With the help of Cry-Baby’s gang (Ricki Lake, Traci Lords, Kim McGuire and Darren E. Burrows), Allison becomes a fully-initiated drape and King Cry-Baby’s queen. At the ‘Red-Neck Riviera,’ a bout of French kissing is interrupted by Baldwin and an army of squares. The battle leaves Cry-Baby behind bars and Allison vulnerable to rumors about Cry-Baby’s faithlessness. But the Drape gang pulls through, bringing Allison back into their fold and breaking Cry-Baby out just in time to save him from a dreaded wiffle haircut. The local judge pardons Cry-Baby on the grounds of a sexy dance number (“Please, Mr. Jailer”), but the squares demand satisfaction in the form of a game of ‘Chicken’. Cry-Baby claims the victory, reunites with Allison, and leaves every drape with a lonely teardrop in their eye.