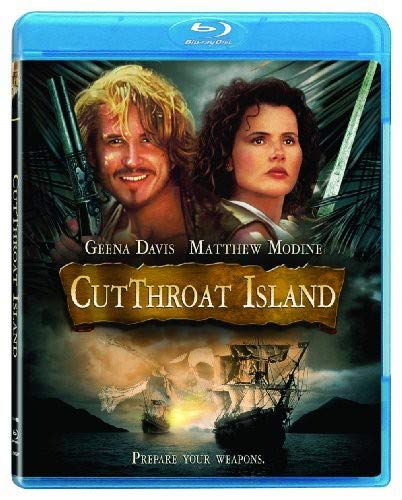 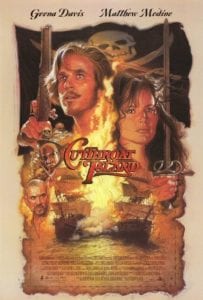 In colonial Jamaica, ca 1668, the pirate, Morgan Adams, tries to free her dad, Black Harry, who has been captured by his brother, Dawg Brown. The two brothers, along with a third named Mordechai own part of a map when combined reveals the secret location of treasure on Cutthroat Island.

Morgan can’t save her father from being killed, but she gets his piece of the map which has been hidden in plain site by way of a tattoo on his scalp. As her ship, the Morning Star, sets sail for the booty, Morgan discovers that the map is in Latin and she needs a translator.

Naturally, there is an imprisoned thief named William Shaw on nearby Port Royal who not only knows Latin, but is about to be sold to the highest bidder as a slave.

Morgan sets sail to the port and buys William, but Morgan is a wanted woman herself, and Jamaica’s Governor Ainslee vows to capture her; for profit of course as he’s corrupt to the bone.

Morgan escapes, but now, the chase is on to get the treasure before her Uncle Dawg (and the British throne who eventually forms a partnership with him) can kill Morgan and take the gold for himself and Governor Ainslee.

Combine some very flat acting and a predictable plot line with an awesome ship to ship sea battle, and you have a flop that killed pirate movies until Captain Jack Sparrow saved them with 2003’s Pirates of the Caribbean: The Curse of the Black Pearl.