Gibson Rickenbacker is a vagabond survivor of the great plague who helps escort individuals across the wasteland. Gibson agrees to escort the half-human, half-cyborg Pearl to Atlanta so that she can transmit a possible cure for a plague to the scientists who maybe able to do something about it. Pearl is abducted by a scavenger named Fender, a man who killed Gibson’s adopted family years before. Now, Gibson sets out on a mission to not only recover Pearl, but to get his revenge on the man who changed his life. 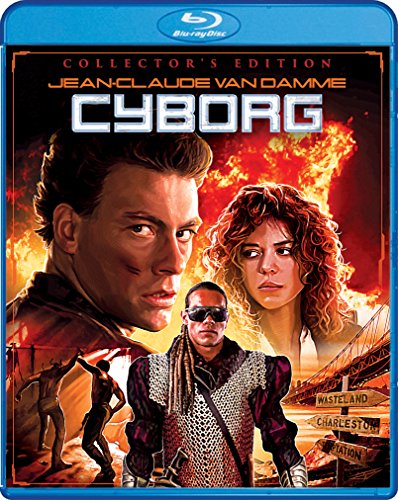 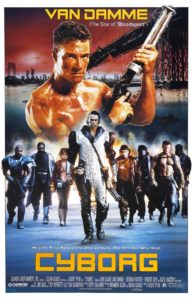 In the distant future, a plague has wiped out most human life on the planet. That which remains fights daily for mere survival. Two such souls, a man and a woman named Pearl (Dayle Haddon), are on the run from a group of scavengers led by their chainmail wearing leader Fender (Vincent Klyn). The man is killed trying to hold off the scavengers. A lone scavenger named Gibson Rickenbacker (Jean-Claude Van Damme) intervenes and tries to assist Pearl get away. Pearl reveals that she is a cyborg and that she has the cure for the plague stored in her hard drive.

Fender wants the cure for himself so he can control who gets it. Pearl hires Gibson to protect her and transport her to a group of scientists in Atlanta. Gibson fights off many of the scavengers, but he is ultimately overwhelmed. Pearl is captured by Fender and his men, but Gibson survives. Fender takes Pearl back to his ship in order to transport her to Atlanta.

Gibson frees himself from the wreckage that imprisoned him and vows to uphold his word to protect Pearl and deliver her to the scientists in Atlanta. He begins his trek to Atlanta, traversing over land. Gibson is joined by another survivor from the village named Nady (Deborah Richter). Nady offers to help him, but Gibson is focused on getting revenge on Fender. They proceed to a shantytown where Gibson talks with his friend Maize (Jophery C. Brown). Maize tells Gibson where he can catch Fender’s boat.

During the journey, Gibson has flashbacks of a previous family that hired him to get them out of New York. Gibson gets them to the countryside where they set up a home in a farmhouse. The family invites Gibson to stay with them, which he does, giving up his previous life. However, a group of scavengers eventually shows up at the farm and kills most of the family. Fender is part of the scavengers. Gibson survives the attack.

Back in the present, Gibson and Nady leave the shantytown and are immediately ambushed by highwaymen. Gibson and Nady are separated in the attack. Gibson kills two of the men in the woods while Nady runs to a nearby building. Eventually, Gibson goes to the building and finds Nady being held at knifepoint. Gibson uses his gun and boot-shiv to kill the remaining highwaymen and saves Nady.

Eventually, Gibson and Nady make it to the shoreline where Fender will have to land his boat and continue his journey over land to Atlanta. Nady finds herself attracted to Gibson and offers her body to him after she bathes in the ocean. Gibson continues to remember how he gave into the desires previously which ended in tragedy. Gibson rejects Nady’s generous offer.

The next morning, Gibson and Nady find Fender’s boat and follow him to an abandoned industrial complex. Gibson and Nady engage Fender’s men in a running gun and knife battle. Many of the scavengers are killed, but Gibson is wounded by Fender himself. Gibson tries to save Pearl, but she refuses to leave with him. Pearl indicates that she is counting on the forces in Atlanta to destroy Fender and his scavengers. Gibson and Nady retreat into the sewers pursued by Fender’s men. Gibson kills most of the scavengers in the sewer. He and Nady exit the sewers onto a field where they begin running from Fender’s men. Ultimately, the scavengers catch them. Gibson kills a few, but he is ultimately overpowered. Fender beats Gibson into unconsciousness and then has his men crucify Gibson to the mast of a beached boat, leaving him to die.

While hanging from the mast, Gibson flashes back to his adopted family in the country one last time. In the flashback, Gibson, the oldest girl, and her little brother are tied up with barbwire hanging over a well. Fender gives the barbwire to the younger sister Haley (Haley Peterson) and tells her that if she can hold onto the barbwire, her family will live. The wire cuts into Haley’s hands causing her to let go, resulting in the family falling into the well. Gibson frees himself from the barbwire and climbs out of the well. However, the oldest girl and her brother drown. Jumping back to the present, Gibson recognizes that an older Haley is now a member of Fender’s scavengers. Gibson uses all his strength to break the mast using his heel, falling to the ground. Nady returns and cuts Gibson free from the mast.

Fender and Pearl reach the center of Atlanta by nightfall. Gibson and Nady plan to ambush Fender and his remaining men. Gibson fires an arrow at Fender as he approaches, but the arrow lands at the leader’s feet. Fender orders his men to attack Gibson, while Nady sneaks up and takes out the two scavengers guarding Pearl. Gibson and Fender battle each other one on one. When it looks as if Gibson is going to be defeated again, Haley screams at Fender to stop. Fender moves to kill Haley for her lack of loyalty, but Nady saves her. However, Nady is slashed by Fender’s knife in the process and dies. Gibson gets off the ground and in his rage over Nady’s death, kills Fender by kicking him into a large hook. Gibson, Haley, and Pearl mourn Nady’s death.