In Days of Thunder, Cole Trickle has a successful open wheels career when a used car salesman named Tim Daland recruits him to be his driver in the NASCAR Cup series. Once he proves he’s worthy, they pair him with a legendary former crew chief named Harry Hogge. Through a tumultuous rookie debut and lack of team chemistry, Cole confides in Harry in order to find success in a sport he knows very little about. 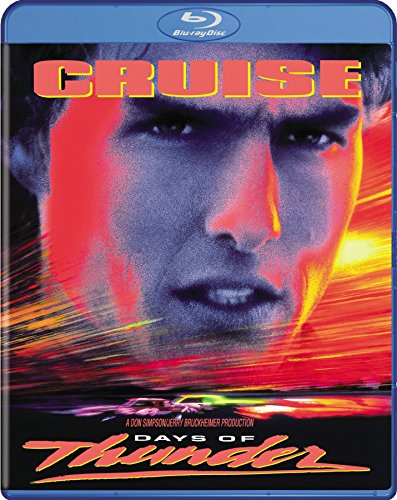 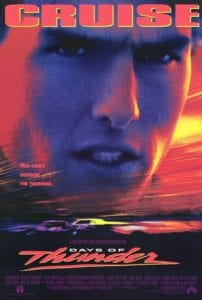 Days of Thunder begins as dawn breaks across the Daytona racetrack for the biggest day of the NASCAR Winston Cup Series. Over the opening credits, we are introduced to the drivers and fans alike preparing for the action to begin. I sit in my whole seat, but I’ll probably only need the edge!

Rowdy Burns, the Apollo Creed to Cole Trickle’s Rocky Balboa, lights up the track like a Maverick, and wins the race. Meanwhile, scenes of Randy Quaid hanging out at a farm with a tractor-driving Robert Duvall are interspersed. Duvall happens to be a former master Nascar machine builder, and Quaid has big plans for him.

Quaid talks Duvall into getting back into the mix to watch a new driver he has in mind to join their unsponsored team. The driver, a very brash Cole Trickle, rolls in on a motorcycle wearing a leather trench coat for a practice drive. He takes a spin around the track in Rowdy’s borrowed car, and impresses Duvall enough that he agrees to make Cole his own cup car in a scene which looks more like precision open heart surgery than customizing a racer. The two men quickly form an odd kind of father/son bond which regenerates as much as it flames out during the course of this messy film.

Cole doesn’t win a race for a long time. He’s more intent of bumping off rivals and burning out tires, but after a series of accidents and backstabbing, the NASCAR administration prevails. We are introduced to Carey Elwes, and he turns out to be the real bad guy that comes into fruition for the finale.

Rowdy and Cole have serious duel head injuries after a major accident. Meanwhile, Cole has fallen head over heels in love with his neurosurgeon, the proud Aussie, Nicole Kidman (actually born in Hawaii but we will claim her). Rowdy will never to drive again as some of his brain tissue appears to be leaking as bad as the oil under his car.

He asks Cole to drive his car, and win the goddam Winston Cup at the Daytona 500. He does in a newly sponsored Mello Yello car, and even though they have had their differences Robert Duvall and Tom Cruise share a father and son moment running on foot towards victory lane, freeze frame, fade out, end credits roll.

That is Days of Thunder.