In the year 1996, homicidal maniac Simon Phoenix kidnaps a group of hostages and takes them to an abandon building. Police officer John Spartan works to stop Phoenix, but he ends up being charged with the murder of the hostages along with Phoenix. Both men are placed into a cryogenic prison, sentenced to spend decades on ice. Both men are awoken in 2032 when Simon escapes, and the future police are incapable of dealing with his level of violence. Spartan is thawed to stop the man who destroyed his life and left him as a stranger in a strange land…the future. 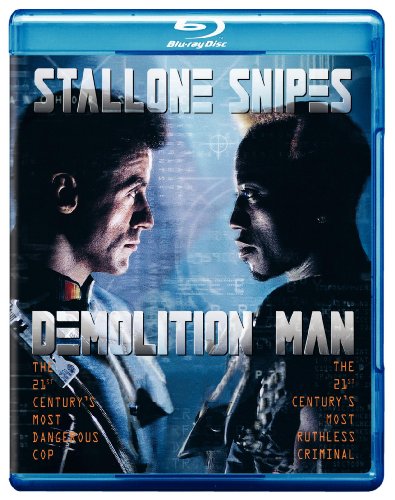 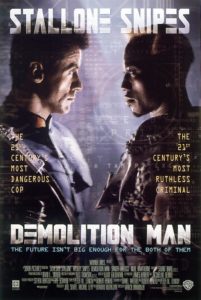 In 1996, homicidal criminal Simon Phoenix (Wesley Snipes) kidnaps a busload of hostages and takes them to an abandoned building in a run-down portion of Los Angeles. LAPD police sergeant John Spartan (Sylvester Stallone), the Demolition Man, is tasked with apprehending Phoenix and saving the hostages. Prior to the mission, Spartan conducts a thermal scan of the area which reveals no trace of hostages. Spartan mounts an unauthorized mission to capture Phoenix. Spartan enters the building and locates Phoenix, who sets off a cascade of explosives that destroys the building. Spartan saves and arrests Phoenix. However, in the aftermath, police begin locating the bodies of the hostages in the rubble. Phoenix lies to police and tells them that Spartan knew the hostages were in the building but did not care. Spartan and Phoenix are both charged with the murders of the hostages and sentenced to lengthy terms in the city’s new cryo-penitentiary, a prison where the inmates are frozen and exposed to subliminal rehabilitation techniques.

Years later, in 2032, the new conjoined city of San Angeles is a peaceful utopia that has no crime. The city is designed and overseen by the famous Dr. Raymond Cocteau (Nigel Hawthorne). Phoenix is removed from cryo-freeze for a parole hearing. For some reason, Phoenix knows the code to release his binds and escapes. Phoenix kills his guards and the prison warden (Andre Gregory) before making his way into the city. Future police attempt to apprehend Phoenix, but they are incapable of dealing with a madman such as Phoenix. A veteran police officer, Lieutenant Zachary Lamb (Bill Combs), suggests to his superiors that they use a police officer that has the experience to capture Phoenix such as Spartan. A young officer fascinated with 20th Century culture, Lieutenant Lenina Huxley (Sandra Bullock) supports Lamb’s suggestion, and Spartan is thawed.

Spartan is conditionally released and reinstated to active duty. Spartan finds life in the future strange. Any type of immoral or unhealthy behavior is illegal, such as alcohol, swearing, eating meat, and having sex. Additionally, Spartan finds that the subliminal reprogramming has altered his behavior. Spartan is not accepted by many of his police officers who believe he is savage and antiquated. Only Huxley and her partner, Officer Alfredo Garcia (Benjamin Bratt), appear to accept Spartan and his input into stopping Phoenix.

Spartan concludes that the first thing Phoenix will do is go to get a gun. The only place to get a gun in the future is a museum. Spartan, Huxley, and Garcia head to the museum and find Phoenix committing a theft of several guns. Spartan and Phoenix fight, but for some reason, Phoenix has increased skills in martial arts, computers, and weapons. Phoenix escapes the museum and holds Cocteau at gunpoint but finds that he cannot pull the trigger. It is revealed that Cocteau messed with Phoenix’s subliminal reeducation to make him an improved killer, but also programmed him not to harm Cocteau. Cocteau wants Phoenix to kill Edgar Friendly (Denis Leary), the leader of a resistance group called the Scraps who rages against Cocteau’s machine. Friendly and his people live underground in the ruins of old Los Angeles. They reject Cocteau’s moral ideals and seek to return to the “hedonistic” days of the 1990s. Phoenix sets out to kill Friendly.

In the meantime, Spartan and Huxley witness the exchange between Cocteau and Phoenix on security cameras and then review the cryo-prison records. They are shocked to discover what Phoenix was being programmed with. They conclude that Cocteau is using Phoenix to kill Friendly and the police officers venture underground to find the resistance leader. At the same time, Phoenix returns to Cocteau and requests additional criminals to be released to assist him with combatting Spartan. Phoenix then leads his troops underground to kill Friendly. They very nearly kill Friendly, but Spartan and Huxley save him. Phoenix taunts Spartan with the information that he framed Spartan for the deaths of the hostages and that Phoenix had already killed them before Spartan ever entered the abandoned building. Phoenix escapes the underground and heads back to Cocteau. Unable to kill Cocteau, he has one of his gang members kill Cocteau. Phoenix then begins thawing out more killers from the cryo-prison.

Armed with ancient weapons from Friendly’s people, Spartan heads to the cryo-prison to stop Phoenix. He shocks Huxley unconscious to protect her and then enters the building. The two men out of time fight in the cryo-chamber with thawing lasers shooting everywhere. Spartan manages to break a vial of cryogenic chemical that rapidly freezes Phoenix’s body. Spartan kicks the ice-cold body of Phoenix, decapitating him. The frozen head falls to the floor and shatters. The freezing process causes a catastrophic cascade effect within the prison, and the facility explodes. Spartan escapes before the explosion.

On the outside, Huxley and the police force ponder the combined loss of Cocteau and the cryo-prison, and the effect that it will have on their society. Spartan suggests that they and Friendly’s people compromise and integrate the best aspects of each of their cultures to create something better. Spartan kisses Huxley and the two leave together.