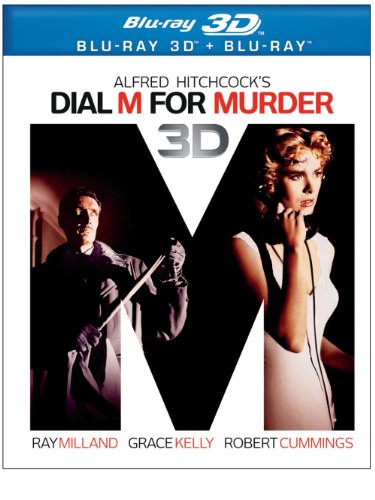 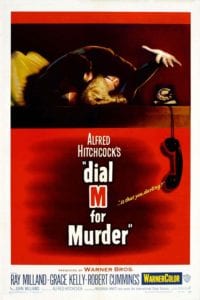 Ex tennis player, Tony Wendice, secretly knows his wealthy, socialite wife Margot as had an affair with American crime-fiction writer Mark Halliday. Over the past few months, he’s come up with an elaborate plan to murder her out of spite, revenge, and money.

To carry out his plan, Tony blackmails an old acquaintance from the University of Cambridge, Charles Alexander “CA” Swann. He knows Swann’s a small-time criminal, and he tells Swann about Margot’s affair.

Earlier in the year, Tony stole Margot’s handbag, which contained a love letter from Mark. He then anonymously blackmailed her with a letter. The night of Swann’s visit to his flat, Tony tricks Swann into leaving his fingerprints on the letter. Tony then offers to pay him £1,000 to kill Margot, and says he will turn Swann in to the police as Margot’s blackmailer if he refuses. Due to Swann’s criminal history, the police would most likely believe Tony’s blackmail accusation.

When Swann agrees, Tony tells him the murder needs to take place the following night. He has it all worked out. Since Mark’s in town, he will take him to a stag party for an alibi. This will leave Margot at home alone where Tony will hide her key to the flat outside the front door. All Swann needs to do is to sneak in when Margot is asleep, hide behind the curtains, and wait until eleven o’clock when Tony will telephone the place from the party. Swann will kill Margot when she answers the phone, and then leave signs suggesting a burglary gone wrong. He can then exit through the front door, and hide the key again for the perfect crime.

The next night, Swann enters the flat, and waits. At the party, Tony’s over wound his watch, and it stopped working, so he phones three minutes later than intended. Margot comes to the phone, and Swann tries to strangle her with his scarf. However, Margot grabs a pair of scissors, and stabs him in the back; killing him dead.

When she picks up the phone again, and asks the caller for help, Tony speaks up. He tells her not to do anything until he arrives home. When he returns, he calls the police, and tells Margot to go to the bedroom where he will take care of everything. Before the police arrive, Tony moves what he thinks is Margot’s latchkey from Swann’s pocket into her handbag, plants Mark’s letter on Swann, and then destroys Swann’s scarf. He then plants Margot’s own stocking in an attempt to incriminate her for killing her blackmailer.

The next day, Chief Inspector Hubbard arrives, and questions the couple. Margot makes several conflicting statements, and Tony lies to him. When Hubbard suggests Swann must have entered through the front door, Tony claims he saw Swann at the place and time Margot’s handbag was stolen. He then suggests that Swann made a copy of her key. Hubbard doesn’t believe this because Swann didn’t have a key on him. Hubbard concludes Margot killed Swann for blackmailing her, and arrests her. The court finds Margot guilty, and sentences her to death.

Months pass, and the day before Margot’s scheduled execution, Mark visits Tony, saying he’s come up with a story for Tony to tell the police in order to save Margot’s life. Unfortunately for Tony, Mark’s story is what actually happened; that Tony bribed Swann to murder Margot. However, Tony says the story isn’t realistic.

When Hubbard arrives unannounced, Mark hides in the bedroom. Hubbard questions Tony over large sums of cash he has been spending. He tricks Tony into revealing that his latchkey is in his raincoat, and then asks Tony about his attaché case. Tony claims he lost the case in a cab, but Mark, overhearing the conversation, spots it on the bed. He uses a knife to open it, and finds it full of one pound notes. Mark puts two and two together, and figures out that £500 was part of Tony’s payoff to Swann. Mark stops Hubbard, and explains his theory to him.

Tony lies again, and says that the cash was Margot’s blackmail payment to Swann, which he concealed to cover up her guilt. Hubbard appears to accept Tony’s explanation over Mark’s theory, so Mark angrily leaves. However, Hubbard slyly swaps his own raincoat with Tony’s, and once Tony leaves, he uses Tony’s key to re-enter the flat. Mark follows him in too. Hubbard already knows that the key in Margot’s handbag was Swann’s own latchkey. He figures that Swann put the latchkey back in its hiding-place after unlocking the door. He suspects (and has suspected for quite some time) that Tony conspired with Swann to murder Margot.

To confirm his theory, Hubbard developed an elaborate ruse to nab Tony. Now that Tony’s left the flat, he has plainclothes policemen bring Margot there from prison. She unsuccessfully tries to unlock the door with the key in her handbag, and then enters through the garden. This shows she’s unaware of any hidden key.

Hubbard has one of the officers return to the station with her bag and key. When Tony returns from his errand, he discovers he doesn’t have a key, so he heads to the police station to retrieve Margot’s handbag with her key in it. When that key doesn’t work, Tony remembers to check the hiding place on the stairs, and retrieves the other latchkey. He opens the door with it, and finds everyone in the flat waiting for him. Hubbard and another police officer block Tony’s only exits, so he casually pours himself a drink. With the jig up, Tony congratulates Hubbard, and offers Margot a stiff one too.