James Bond is out to investigate mysterious activities surrounding the world diamond market. When he discovers Ernst Blofeld is busy stockpiling the precious gems to use in a deadly laser satellite capable of destroying massive targets on land, sea, and air, Bond jumps into action. He enlists the help of a beautiful smuggler named Tiffany Case, and sets out to stop the madman. As he races against the clock, Bond grapples with a host of enemies out to stop him; the punny Mr. Wint and Mr. Kidd as well as Bambi and Thumper—two scantily-clad beauties who are more than a match for Bond in hand-to-hand combat. Finally, he finds a reclusive billionaire named Willard Whyte who holds a vital clue to Blofeld’s whereabouts. 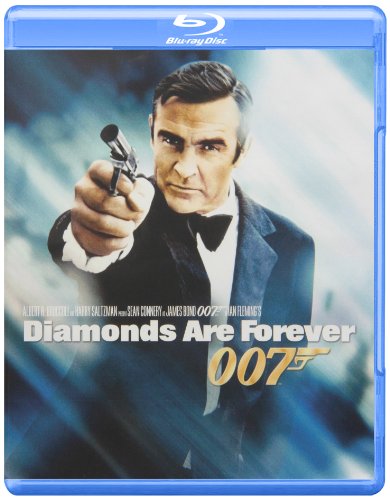 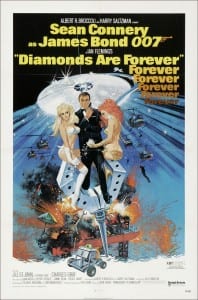 James Bond kills Blofeld by drowning him in boiling mud and gets back to work with mundane spy missions from MI6. They have him investigate an organization that is hoarding diamonds with no apparent reason. Bond’s first move is to impersonate diamond smuggler, Peter Franks, and to penetrate the shadowy world tariff skipping. Bond bumps into the real Peter Franks and gives him the shaft, which provides the perfect opportunity to smuggle Tiffany Case’s diamonds into America, in Frank’s dead body.

Once in America, Bond takes fake diamonds to Las Vegas and passes them to a stand-up comedian at the casino of reclusive billionaire, Willard Whyte. The comedian is killed by a couple of gay assassins who don’t realize the diamonds are fakes. Later that night, Bond tells Tiffany Case how to get the real diamonds by playing games at the casino, where they’ve been stuffed into a prize doll.

Bond passes the diamonds to their target and follows him to a secret research facility owned by Whyte where the diamonds are being fixed to a satellite constructed by Professor Metz, a laser specialist. Bond’s cover is blown, and he escapes in a moon buggy.

Bond goes to confront Whyte. Turns out Whyte is not one, but two Blofelds. Turns out Blofeld has not only been impersonating Whyte, but also himself in order to use Whyte’s resources to take over the world. Bond kills one Blofeld and is eventually captured and left for dead by the assassin couple in a way that would definitely give Freud nothing to say by stuffing him into a tube that is to be buried underground.

After Bond escapes, he frees Whyte and they figure Blofeld has fled to an oil platform in Baja Mexico. From the platform, Blofeld is using his new laser gun to force nuclear missiles to explode, and thus to take over the world. Bond storms the platform and smashes Blofeld before he can escape. All that is left is a relaxing cruise with Case.

The assassins are onto Bond, however. They ambush him by posing as servers and try to kill him in another way that would give Freud absolutely nothing to say—by trying to stab him with two flaming pokers and explode him with cake. Bond bests the flamers by setting them aflame and blowing them to smithereens. The film ends as he and Case wonder how to get the diamonds back down from the satellite.