The story of Greg Heffley, a middle-school scrawny boy with an unlimited ambition to be famous when he is older and an overactive imagination. In contrast to Greg, his best friend Rowley just breezes through life without any hardship and just seems to be successful without too much effort. In his journal, we get a first-person perspective into Greg’s hilariously eventful life, and his out-of-the-box thoughts and ideas. In time, our little protagonist learns to appreciate his real friends and the satisfaction of doing what is right. (Courtesy of 20th Century Studios) 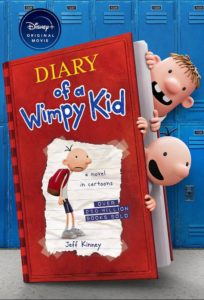 Greg Heffley (Brady Noon) is a young kid who is about to enter middle school with his best friend Rowley Jefferson (Ethan William Childress). Before the school year starts, Greg gets advice from his older brother Rodrick (Hunter Dillon) on how to survive middle school. Rodrick’s advice scares Greg, but Rodrick emphasizes avoiding the Cheese Touch, touching a piece of cheese left on the basketball court years before. Greg fears that Rowley’s childlike tendencies will get them bullied so Greg tries to urge his best friend to grow up. Greg does not share the information about the Cheese Touch with Rowley fearing that it will scare him too much.

On the first day of school, Greg attempts to help Rowley adjust to their new world. Despite their combined efforts, both Greg and Rowley end up being shunned by most of the students at the school. Greg blames their shunning on Rowley’s childish antics. However, they still avoid the bottom of the school hierarchy.

During Halloween, Greg and Rowley decide to trick or treat even though it is considered uncool in middle school. They are forced to take Greg’s little brother Manny (Grace Newton) with them. Greg realizes that Manny and his cute pirate costume attract enormous amounts of candy from people. Greg and Rowley acquire an impressive haul of candy. Manny and Rowley become tired, but Greg insists that they continue on. Greg takes them on a shortcut through Snake Road despite Greg’s mother Susan’s (Erica Cerra) warning not to.

On Snake Road, the trio encounters a group of teenagers (Cyrus Arnold, Zeno Robinson, and Braxton Baker) in a truck who stop to mock the middle schoolers and steal their candy. Greg and Rowley run off and are pursued by the teenagers, but the younger kids evade the teenagers by tricking them into driving their truck into a ditch. The teenagers swear revenge. Greg and Rowley make it back safely to the backdoor of Greg’s house where they are doused with water by Greg’s dad Frank (Chris Diamantopoulos) by mistake, ruining their candy hauls. Manny reveals to Susan that Greg disobeyed her directive not to go on Snake Road, and Greg loses video games for a week as a punishment.

While grounded from video games, Greg and Rowley play a game of “rumble trike,” another prohibited activity of Susan’s. Greg accidentally breaks Rowley’s arm during the game. Greg asks his friend to cover for him, but Susan discovers that Greg broke one of her rules again. However, Susan decides not to punish her son further. Instead, she insists that Greg do the right thing and be a good friend to Rowley. Greg tries to use Rowley’s injury to elevate his status in school, but his plan backfires. The other students shun Greg even further, while the other students accept and give Rowley additional attention.

Greg attempts a different tactic to make himself popular and becomes a cartoonist for the school paper. Rowley takes an interest in the idea as well, but Greg disregards all of Rowley’s animation ideas. Instead, Greg insists that Rowley work on his own comics by himself rather than working together. Greg’s entry is accepted but is heavily edited by the librarian which causes the other students to mock Greg even further. Greg resigns from his position and is replaced by Rowley who has success with Greg’s disregarded idea. Greg and Rowley get into an argument over the comic, and they decide to stop being friends.

In the weeks that follow, Rowley befriends a boy named Chirag Gupta (Veda Maharaj) and spends more time with him. Greg decides to hang out with the incredibly unpopular Fregley (Christian Convery) to make Rowley jealous. Greg’s has a sleepover at his house with Fregley and immediately regrets his decision. Fregley eats a candy bar and becomes hyperactive. Fregley chases Greg around the house with a booger which forces Greg to hide out in the bathroom for the remainder of the sleepover.

The next day, Greg and Rowley confront each other about their perceived mutual betrayals. Their argument draws the attention of other kids at school who urge Greg and Rowley to fight each other. Before a fight breaks out, the three teenagers pull up in their truck to seek their revenge on Greg and Rowley. While the other kids scatter, the teenagers force Rowley to eat a piece of the cheese on the basketball court. Before they can force Greg to do the same, the school’s gym coach, Mr. Underwood (Billy Lopez), arrives and chases off the teenagers.

The other kids return to see what happened. They notice that a piece of the cheese is missing. Greg lies and claims that he was the one who ate the cheese to protect Rowley. Everyone runs from Greg to avoid the Cheese Touch. Greg and Rowley decide to resume their friendship. Greg also realizes that the Cheese Touch forces everyone to give him and Rowley a wide berth which allows them to always find a place to eat at lunch.