In Die Hard, NYPD cop, John McClane, flies out to Los Angeles, California to visit his wife, Holly, for Christmas. The day he arrives, he immediately heads to the Nakatomi Corporation where Holly works to join her for their Christmas party. Soon, Hans Gruber and his gang crash the party, and take everyone hostage; except for John. As he hides, the thugs begin their lucrative heist. With no viable way to escape, and all phone lines cut, John takes matters into his own hands until he can get a hold of LAPD. 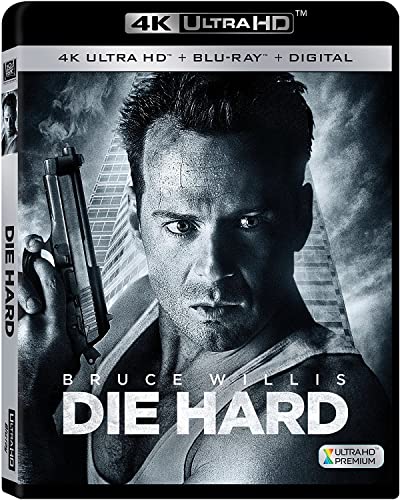 The summary below contains spoilers.
As with every great Christmas movie, Die Hard begins on Christmas Eve. Our hero is New York City Police Detective Lieutenant John McClane, who is just arriving in Los Angeles to see his family. McClane, a product of a bygone era and chauvinistic attitudes, is estranged from his wife Holly, who has become a successful corporate officer for the Nakatomi Corporation. John hopes to reconcile with Holly over the holidays and arrives during a Christmas party being held by Holly’s boss, Joseph Takagi. McClane finds Holly, but the two are soon arguing again over what they each think their marriage is or is not about.

Meanwhile, Takagi’s party is interrupted by a group of terrorists led by Hans Gruber. The terrorists take control of the party goers, but John is alerted by the gun fire and escapes alone into the stairwell, sans shoes and a shirt. However, McClane is armed with his police issued handgun and his tough as nails attitude.

Hans introduces himself and his compatriots to the hostages, and then takes Takagi to meet with his computer expert, Theo. Hans promises to teach the Nakatomi Corporation a lesson for its greed by displaying his greed and taking $640 million in bearer bonds from the corporate vault. The terrorists are not terrorists at all. They are thieves. To acquire these bonds, Hans and Theo need Takagi’s code to get into the vault. The code is one of seven levels of security to open the vault, but Hans believes in being thorough. When Takagi refuses, Hans shoots him in the head while McClane helplessly watches from outside the conference room.

After observing the execution,John hides on one of the incomplete floors near the top of the building. Using his wits, he triggers the fire alarm, in hopes that it will bring the fire department and help. However, the terrorists cancel the call, and worse, send Tony to capture our hero. McClane gets into a life or death struggle with Tony, but ultimately breaks the German terrorist’s neck in a fall down the stairway. John takes Tony’s machine gun and radio, which he uses to contact the LAPD.

Sgt. Al Powell, a police desk jockey on his way home for the day, is dispatched to follow up on McClane’s unorthodox police call. Powell does a half assed investigation, while Hans sends Heinrich and Marco to stop John. McClane takes out the two would be terrorists, but when Powell gives up and starts to go home, McClane throws Marco’s corpse onto the LAPD officer’s car from several stories up. Powell’s car soon comes under heavy fire while John takes Heinrich’s bag containing C-4 explosives and detonators and retreats again to the unfinished floors of the building.

The building is soon surrounded by an army of LAPD personnel, who attempt to retake the building under the orders of the hapless Deputy Chief Robinson. The attacking SWAT teams find themselves under heavy fire, and only McClane can help them when he blows up terrorists James and Alexander, and pretty much the entire fourth floor, with the C-4. At the same time, Holly’s cocaine loving coworker Harry Ellis attempts to mediate between Hans and John for the return of the detonators. When McClane refuses, Hans executes Ellis.

After killing Ellis, Hans decides to check up on the work of his henchmen, because that is the kind of micro manager that he is. Hans, without his gun, encounters John near the roof of the building. McClane, seemingly unaware of who Hans really is, believes Hans’ fake American accent and the terrorist’s bogus story that he is one of the party goers who got away. McClane gives Hans a gun, and Hans uses his radio to call for back up from Karl, Franco, and Fritz.

However, McClane is one step ahead of the terrorists, and appears to realize that Hans is not who he was pretending to be. The gun that John gave Hans is empty, and useless. But the terrorist cavalry arrives and an impressive gun battle ensues. McClane kills Fritz and Franco, but Karl and Hans are able to take out all the glass windows on the floor, leaving McClane no option for escape but to run across the broken glass barefooted. McClane makes his escape, but leaves behind the detonators. Hans finds them and states that they are back in business.

Back with the law enforcement on the ground, the police blockade is now being run by two FBI agents, Agent Johnson and Agent Johnson. And despite a similar approach to their job, there is no relation. The agents order the building’s power to be shut off with the intent of causing the terrorists to be fearful and uncertain. However, the agents do not know that they are playing into Han’s ultimate plan.

The corporate vault’s final lock is an electromagnet that can’t be cut or disabled by the terrorists in the building. The terrorists need the building’s power to be cut to get into the vault, and once it is, Hans can move forward with the final stage of his plan. To move the hostages to the roof of the building under the pretense of taking helicopters to the airport for a getaway, and blowing the roof of the skyscraper, killing all the hostages and faking the deaths of him and his men.

McClane discovers Hans’ plot, but unfortunately, he is captured by Karl before he can inform Powell on the ground. John and Karl fight, with Karl seeking vengeance for his brother Tony’s death at hands of McClane near the beginning of the film. McClane is shot, but he is able to string Karl up by the neck with a chain. John runs to roof to save Holly and the hostages from being blown into orbit. But Hans has discovered that Holly Gennaro is Holly McClane, and has taken John’s wife to the vault with him.

McClane scares the hostages off the roof, but ends up being shot at by the now double-crossing FBI agents in the helicopters who think he is a terrorist. McClane jumps off the roof tied to a fire hose moments before the roof is blown, destroying the FBI agents and their gun ship helicopters. Hanging from the side of the building, McClane shoots through a skyscraper window and begins his search for his wife.

An exhausted and injured McClane finds Holly with Hans and Eddie, the Huey Lewis terrorist. With his wife being held at gun point, John surrenders his machine gun and places his hands over his head. Unbeknownst to both of the terrorists, McClane has taped his hand gun to his upper back with Christmas tape, just like Jesus would do. And before you can say Christmas miracle, John pulls the gun and shoots both of the remaining terrorists.

Bad is bad for Eddie, who falls down dead, but Hans is still alive and hangs onto the arm of Holly while hanging out of a shattered window. Before Hans can draw a bead on Holly or her husband, McClane is able to release the clasp on Holly’s expensive corporate watch which drops Hans dozens of stories to the ground.

Everything appears calm and bright as Holly and John leave the building with the other hostages, until the resurrected Karl stands up with his impressive weapon and tries to kill McClane. Powell draws down on Karl and hits the terrorists with five shots, killing him. Holly and John get into the limo that our wayward New York detective came in, and head off to celebrate the holidays McClane style.