In Die Hard with a Vengeance, Lieutenant John McClane is back in New York after separating from his wife Holly. When the Big Apple is terrorized by a mad bomber named Simon, a suspended McClane is returned to active duty and pulled back into a battle for life and death. This time, McClane is joined by Zeus, a good Samaritan, who hates McClane just about as much as Simon does. Will McClane be able to stop Simon before he completes his personal vendetta against the police officer? 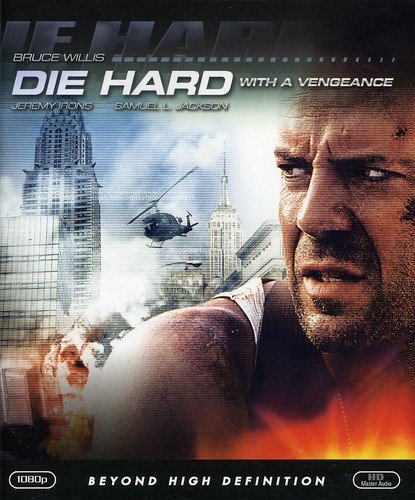 Die Hard With a Vengeance [Blu-ray] 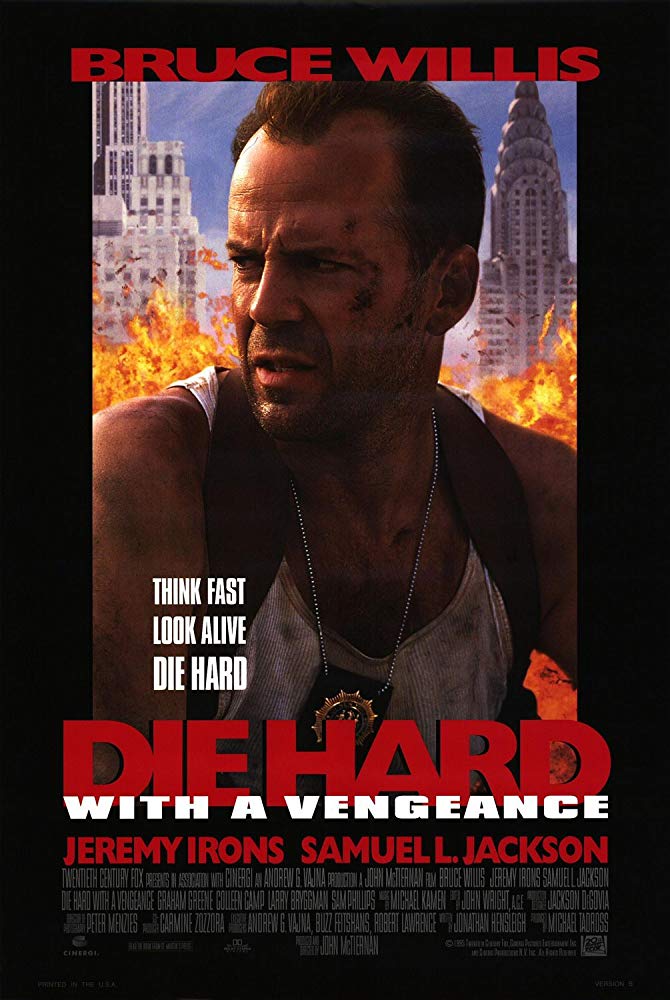 Die Hard with a Vengeance begins at a department store in downtown New York City as it blows up during the morning commute. The New York City Police Department receives a call from a terrorist by the name of Simon (Jeremy Irons) who claims responsibility. Simon threatens to detonate another bomb unless Lieutenant John McClane (Bruce Willis) does exactly what he says. McClane is on suspension as his separation from his wife and his alcohol use have caused his life to spin out of control. Nevertheless, McClane is sent to Harlem and directed to wear a derogatory sign directed at African Americans, the primary residence of Harlem.

In Harlem, McClane is attacked by a group of angry men and is saved from further injury by Zeus Carver (Samuel L. Jackson), a nearby electrician and shop owner. Zeus and McClane return to police headquarters, where they learn from the bomb squad that a large quantity of binary liquid explosives have been recently stolen. Simon calls again and orders McClane and Zeus to follow his commands and sends them out into the city.

Simon makes them jump through several hoops before he directs them to reach the Wall Street subway station within 30 minutes or he will explode a bomb on an arriving train. McClane gets on the subway train, and Zeus drives there. McClane finds the bomb but has no idea on how to disarm it. Zeus reaches the station first and answers Zeus’ phone call. However, the pair were directed to travel together, so Simon detonates the bomb, which McClane has thrown out of the back of the subway car. The explosion derails the train, destroys the station, and creates all sorts of havoc on Wall Street, requiring most buildings to be evacuated. However, both McClane and Zeus survive.

As the police pick up the pieces, the FBI arrives and requests a meeting with McClane. They reveal that the true identity of Simon is actually Peter Krieg, a former colonel in the East Germany army and a current mercenary-for-hire. When the name does not ring any bells with McClane, the head FBI agent reveals Peter Krieg’s birth name is Simon Peter Gruber, the brother of Hans Gruber (Alan Rickman), the man McClane killed at the Nakatomi building in Los Angeles years before.

After the reveal, Simon calls McClane and the police and tells them he has placed a bomb in a New York City public school that is rigged with a radio detonator, which can be activated by accident by the use of the FBI and police bands. Simon says that he will reveal the location of the school if McClane and Zeus continue to play his game. Simon threatens to detonate the bomb if he sees any schools being evacuated by the police.

McClane and Zeus set off and follow Simon’s instruction, while all available law enforcement begin their search of all schools in New York. Unbeknownst to the police, Simon watches them scatter and leave from the top of a nearby building. Simon and his team impersonate investors and enter the Federal Reserve Bank and take it over. The Federal Reserve Bank contains billions of dollars in gold. Other members of Simon’s team also impersonate repair crews who enter the Reserve from underground and begin loading the gold into dump trucks.

Meanwhile, McClane and Zeus continue to run all over the city and successfully complete each of Simon’s tasks. However, McClane soon realizes that Simon is just using the school bomb as a distraction and he returns to Wall Street while Zeus continues with Simon’s tasks. McClane reaches the Reserve building and discovers Simon’s robbery. McClane chases after the dump trucks and follows them into an aqueduct.

McClane catches up to Simon’s trailing truck and kills the men inside. He finds that they have a pre-wrapped role of quarters. Simon discovers that McClane is pursuing them through the aqueduct, so he destroys a cofferdam, which floods the tunnel. McClane escapes by jumping onto a ladder to a vent in the ceiling of the tunnel. When he reaches the top of the vent, Zeus finds him.

Some of Simon’s men who have been following Zeus try to kill McClane and Zeus, but McClane is able to kill them. Once again, he finds that these men also have pre-wrapped roll of quarters. Zeus realizes that the quarters are enough to pay for a toll bridge. They go to a nearby toll bridge and discover that the trucks have unloaded their cargo onto a tanker vessel.

McClane and Zeus board the tanker. However, McClane discovers that the gold is not on board the ship, right before he and Zeus are captured by Simon and his men. Simon reveals his evil plan to steal the gold and fool the world into thinking that he sunk it with the tanker into the ocean. He reveals that the bomb in the school is fake, and the real bomb is on the ship. Simon plans to blow up the ship, now with McClane and Zeus on it, which will have the effect of sending the world’s economies into a downward spiral.

After being attached to the bomb, McClane asks Simon for some aspirin for his hangover. Simon smiles and gives him his bottle of aspirin. After Simon leaves, McClane pulls a metal splinter from the cable they used to board the ship out of his arm with his teeth. He uses the splinter to pick his handcuffs and then frees Zeus. They both jump off the ship right before the bomb explodes.

Back on land, McClane and Zeus are debriefed by police. McClane reports that none of the gold was lost. McClane happens to notice that the bottle of aspirin given to him by Simon has a Quebec address. McClane, Zeus, and the police arrive at a warehouse in Quebec and surround Simon and his men. Simon and his girlfriend Katya (Sam Phillips) attempt to escape in a helicopter while the rest of Simon’s men are captured by police. Simon takes the opportunity to try to kill McClane before making his escape and fires at the police officer from his helicopter. As Simon closes in, McClane shoots an electrical cable that falls into the blades of Simon’s helicopter, causing the copter to crash and explode, killing Simon.

McClane and Zeus share a laugh before Zeus tells McClane to go call his wife Holly (Bonnie Bedelia) from a nearby payphone and apologize.