In Dirty Rotten Scoundrels, the wealthy British swindler, Lawrence Jamieson, lives in Beaumont-sur-Mer on the French Riviera. He’s made most of his money conning wealthy women out of money. With the help of the local Police Inspector, Andre, and a dark lord/butler named Arthur, he pretends to be a deposed Prince in need of financing for a secret war to liberate his people. One day, the loud American, Freddy Benson, comes to town Beaumont-sur-Mer to also con unsuspecting wealthy women out of money, and he threatens to scare them all out of town. Not only does Freddy’s brashness perturb Lawrence, but he also believes Freddy is the Jackal; a master con man making waves throughout Europe.

However, Freddy is actually a small-time con man; happily scamming a few hundred dollars here and there where Lawrence brings in thousands of dollars per scam. Soon, Freddy convinces Lawrence to teach him his tricks, but eventually, Freddy balks at his meager earnings from the endeavor. Things come to a head when the two come up with a bet where the loser leaves town forever. The men choose a bumbling American “soap Queen” named Janet Colgate, who has just arrived in town, as their mark. The first fella to get fifty thousand dollars out of her wins. However, as the bet goes on, our hapless criminals find out that they are in for much more than they bargained for. 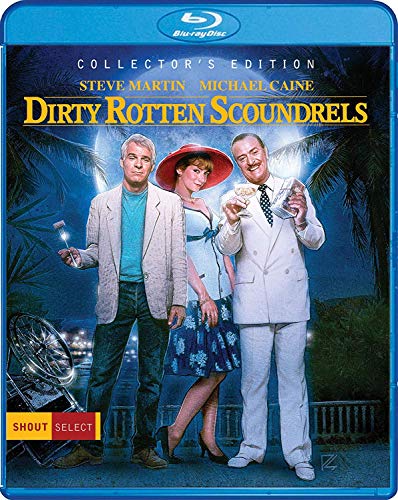 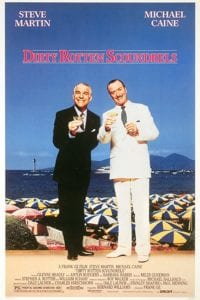 British conman, Lawrence Jamieson, swindles rich women out of money on the French Riviera for a living. With the help of a corrupt Inspector named Andre and a humble manservant by the name of Supreme Chancellor Arthur Palpatine, Lawrence seduces wealthy and morally corrupt women to the dark side; taking their money with him. While he can pick and choose the women he steals from, reports of another conman in the area known only as “The Jackal” threatens his scheme.

On a return train ride home to Beaumont-sur-Mer, Lawrence meets American Freddy Benson, a small-time hustler who’s out of Lawrence’s league (or so Lawrence thinks). Freddy is a loud mouth, and he brags to Lawrence how he cons women for little bits of money. Since Freddy’s inexperienced antics are getting him press attention as the Jackal (and not wanting Freddy to scare off his prey), Lawrence has his pal, Inspector Andre, arrest Freddy, and give him a one-way ticket out of town.

However, on that flight home, Freddy meets one of Lawrence’s clueless victims, and rightly deduces Lawrence is not only a crook, but a much better one than he is. Freddy returns to Beaumont-sur-Mer, and blackmails Lawrence into teaching him the ways of the dark side.

Lawrence reluctantly agrees, and teaches Freddy how to look and act the part. Eventually, he invites Freddy to partake in the schemes as his mentally special brother, Ruprecht. This allows Lawrence to scare off the women after he seduces them and takes their money. However, when Freddy learns he’s not getting any percentage of the profits, he leaves to make money for himself.

Lawrence is not willing to hand over any portion of his cash cow to Freddy, and the two eventually agree to a bet; the first one to con a woman out of $50,000 wins, and the loser has to leave town. As they make the bet, a naive American Soap heiress, Janet Colgate, stumbles into their hotel. They pick her as their mark.

Freddy strikes first; posing as a wheelchair-bound U.S. Navy veteran who needs to borrow $50,000 so psychiatrist Emil Schaffhausen can cure him of his psychological block that keeps him in a wheelchair. Lawrence is on to Freddy, so he poses as Dr. Schaffhausen, and only agrees to treat Freddy if Janet pays him his $50,000 fee.

Much conning goes back and forth between the two men as they try their best to swindle the innocent Janet. However, once Lawrence discovers Janet isn’t actually a soap heiress to a large fortune, but a simple woman who won a soap contest, and she’s liquidating all her assets and borrowing money from her father to pay for Freddy’s treatment, Lawrence calls off the bet. Freddy, not wanting to give up, counters with a new loser leave town bet; the first one to sleep with Janet wins. Lawrence accepts.

During the course of the bets, Lawrence taunts Freddy in his wheelchair. This angers some British sailors when they see his mistreatment at a club. Later that night, as Lawrence and Freddy agree to their new bet on the drive home, they come across the sailors in a van blocking the entrance to Lawrence’s place. They grab Lawrence, and drive off to put him on a plane out of town.

Freddy takes this opportunity to drive back to the hotel, and prove his love to Janet by standing up and walking over to her. Amazed at Freddy’s progress, Janet gets Freddy to walk into the bedroom where they will make some sweet, sweet love. Unfortunately for Freddy, Lawrence is there watching, and shows himself right before Freddy can work his magic. Lawrence, er Dr. Schaffhausen, declares Freddy cured.

He and Freddy leave Janet to her room where he explains that the sailors let him go after he revealed to them that he is a Royal Naval Reserve officer. Lawrence drops Freddy off at the sailor’s hotel room, and asks them to keep Freddy occupied for the night. Meanwhile, Lawrence takes the time to put Janet on a plane back to Cleveland.

Instead of taking that plane out of town, Janet gets off it before it leaves, and returns to her hotel room; hoping to find Freddy there. He is there, and she tells him she returned because she loves Freddy. The two kiss and go to the bedroom. She asks Freddy to close the blinds, and begins unbuttoning her blouse.

Inspector Andre has been snooping, and he spots Janet return, and follows her. He sees that Freddy closed the drapes to the hotel room, and suspects the worst. He and Lawrence surmise that Freddy has won the bet, and Lawrence prepares to accept defeat gracefully.

However, before Freddy returns, Janet arrives in tears. Freddy stole the $50,000 her father sent, and then split. Lawrence sympathizes with Janet and gives her $50,000 to make up for her loss. He then calls Andre to arrest Freddy, and takes Janet to the airport before she can get into any more trouble.

Before the plane departs, she jumps out of it, and returns Lawrence’s bag; refusing his generous gift. She then departs in the plane as Andre arrives with Freddy in handcuffs and wearing nothing but a bathrobe.

It turns out that Janet stole his clothes, wallet, and all his money. Lawrence opens up his bag to find Freddy’s clothes and a note. In it, Janet admits to taking both men for their money, and signs it, “The Jackal”. Freddy is enraged, but Lawrence smiles with admiration.

A week later, Freddy and Lawrence sit at Lawrence’s villa talking about Janet as Freddy prepares to leave. As they say their goodbyes, the Jackal arrives in a Greek yacht posing as a New York City real estate developer. She prompts Freddy and Lawrence on their roles in her latest scheme as an Australian real estate tycoon and his mute right-hand man.

When their rich marks head off to Lawrence’s estate, Janet tells the boys that while she made $3,000,000 last year swindling people, their $50K was the most fun. The new partners lock arms, and head off to fleece their latest victims.