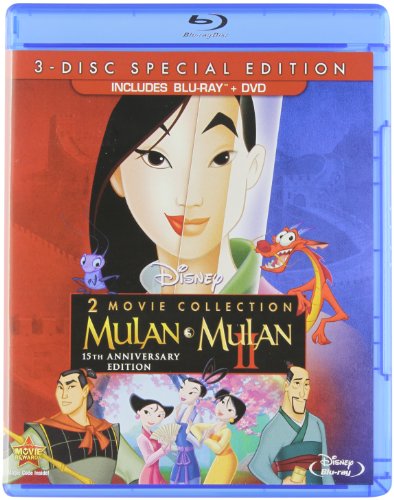 In Mulan, the Hun army has invaded China with the intent to capture and assassinate The Emperor. The Emperor commands that every family in China will send one male member to join his army to defend the Empire. Mulan is the eldest daughter to Zhou, who is the only male member of the family. However, Zhou is handicapped from his younger days in the army. Mulan decides to cut her hair and pose as a man to take her father’s place in the army. But she never dreamed her selfless actions would lead her to fighting the Huns singlehandedly.

In Mulan II, Fa Mulan gets the surprise of her young life when her love, Captain (now General) Li Shang asks for her hand in marriage.  Before the two can have their happily ever after, the Emperor assigns them a secret mission, to escort three princesses to Chang’an, China.  Mushu is determined to drive a wedge between the couple after he learns that he will lose his guardian job if Mulan marries into the Li family.  After the princesses unexpectedly fall in love with the Gang of Three, Mulan decides to help them escape the fate of marrying men they do not love.  This contradicts the Emperor’s orders and forces him to put Mulan’s relationship with Shang into question.  They are attacked by Mongolians, and the fate of China hangs in the balance.

Mulan was released in June 1998 and grossed over $120 million at the box office.  The film also featured the voices of Miguel Ferrer, Pat Morita, Harvey Fierstein, and George Takei.  Mulan II followed six years later and was released direct to video.

Here is the original theatrical trailer for the first Mulan.

Disclaimer: Affiliate links are contained in this post. This means when you click a link, and purchase an item, the MHM Podcast Network will receive an affiliate commission. Advertisers and Affiliate Partnerships do not influence our content. See our Terms of Use about the inclusion of affiliate links on this site for more information.
December 17, 2012
2 minutes read
Show More
Back to top button
Close
Close