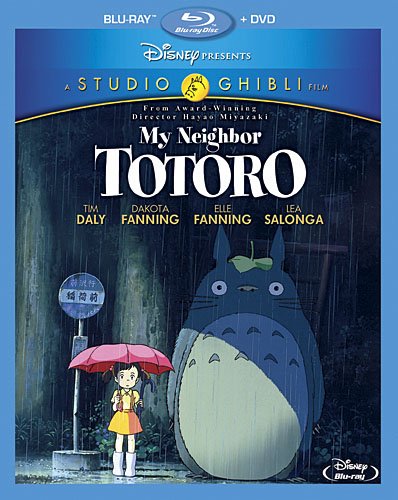 Walt Disney Home Entertainment has revealed its bringing Studio Ghibli’s animated film My Neighbor Totoro to Blu-ray this Spring. The film is written and directed by Hayao Miyazaki and the U.S. version featured the voice talents of Paul Butcher, Dakota Fanning, Elle Fanning, and Tim Daly. My Neighbor Totoro will be available online and stores beginning May 21, 2013.

Disney presents a Studio Ghibli film about the magic of friendship and sisterhood from Academy Award-winning director Hayao Miyazaki (Best Animated Feature, 2001, Spirited Away). Celebrate the 25th anniversary of My Neighbor Totoro, available for the first time on Disney Blu-ray, with a new HD digital transfer and perfect picture and sound. Follow the adventures of Satsuki and her four-year-old sister Mei as they discover their new neighbor is a mysterious forest spirit named Totoro who can only be seen by the eyes of a child. As Totoro introduces the girls to his extraordinary friends, they embark on the journey of a lifetime. My Neighbor Totoro is an amazing animated adventure the whole family will fall in love with.

My Neighbor Totoro was first released in Japan in April of 1988. The film was released in the U.S. on video in 1993. Disney purchased the rights to the film in 2004, and re-released it with a new English dub in 2006.

Disclaimer: Affiliate links are contained in this post. This means when you click a link, and purchase an item, Movie House Memories will receive an affiliate commission. Advertisers and Affiliate Partnerships do not influence our content. See our Terms of Use about the inclusion of affiliate links on this site for more information.
February 22, 2013
1 minute read
Show More
Back to top button
Close
Close