In Do or Die, the Mr. Miyagi impersonating gangster named Kane plots to take out the United States Stock Exchange. He has two men kidnap Federal Agents, Donna and Nicole, and tells them he will send twelve of his best assassins in teams of two to kill the girls starting at noon the next day. He secretly plants a homing device on Donna’s watch, and sets them free. From Molokai to Las Vegas to Louisiana, and Dallas, the girls fight off the assassins with help from Lucas and his team of B-movie Avengers. 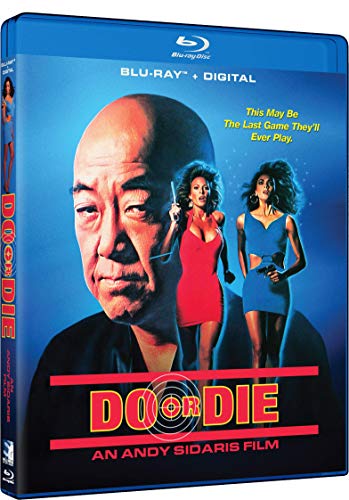 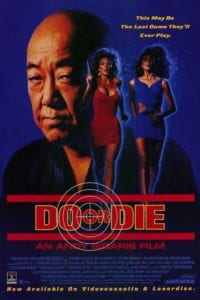 1991’s Do or Die begins with Federal agents, Donna and Nicole being pulled out of a Hawaiian feast on Molokai, and delivered to a crazed Japanese gangster named Kane. While Kane’s two men, Lew and Chen, hold the girls back, Kane challenges the girls to a game of do or die. Six teams with of two of his best assassins will set out to kill the girls. He monologues away with some wax on, wax off B.S., and then plants a bug on Donna’s wristwatch to track the girls. He then sets them free, and continues on with his other plan to take control of the American Stock Exchange.

Meanwhile, Lucas calls Bruce Christian in on his day off in New Orleans, and he orders Bruce and Richard ‘Rico’ Estevez to help the girls in Vegas.

We next wind up in the Las Vegas Deser at the 1/4 Scale Association Air Show. Team 2, consisting of Ava and Skip, is there to shoot the girl’s tits right off. The girls soon arrive, and meet one of the undercover agents. He has a special remote-controlled helicopter armed with a pair of heat-seeking missiles for them to carry around for the rest of the movie. The girls put it in their Geo Tracker, and drive away.

Team Two gets in a suped-up green VW Bug, and they attack with a machine gun. However, Team Two shoots like Stormtroopers, and misses every time. Meanwhile, Bruce and Rico show up in a dune buggy, and they blow up the VW with a bazooka. Team Two is toast.

The girls head to an airport with the tiny helicopter. Bruce and Rico join them before they fly off to Louisiana. Kane is upset to learn of Team Two’s demise.

Lucas goes to Edy Stark’s hoedown, and gives her the new assignment, but first he takes the hoe down. The girls get in a plane while Bruce and Rico fly below. They head towards a swampy cabin where Team Three comprised of Hebert and Bodreaux, dressed as Cajun cooks, whip up a killer catfish recipe for the four of them. Nicole gives a wandering cat some of the fish, and it dies. They realize the cooks tried to poison them, and the chase is on.

Lucas, Edy, Shane Abilene, and Atlanta Lee show up to join in the down home hunt. The girls take to their plane, and spot the cooks in a boat. When they blow up the boat, the explosion alerts the other agents to their location, and they arrest Team Three.

The Agents head out; not trusting anyone, but each other. They arrive to a cabin, and Bruce has first watch. As he guards it, Nicole comes outside. They do body shots of tequila, and then bang.

The next morning, Rico stands guard, Team Four, consisting of Spencer and Dudley, shows up on motorcycles. They park on a pier, and pretend to fish. As they aim to shoot the girls with a high-powered rifle, they accidentally hit a pot, and attract everyone’s attention. They abort their mission, and take off on their motorcycles. Rico and Bruce chase after them on motorcycles of their own. Bruce kills one, Rico blows up the other with a dummy baseball.

Donna gives Edy her watch, so now she’s the target. Team Five, consisting of Hotdog and Sledge, shows up on water skis and attacks Edy , Lucas, Shane, and Atlanta in a boat. Shane can’t shoot straight, so Lucas and Edy take over to shoot Team Five dead…pretty easily shoot them too.

That leaves Team Six of Lew and Chen to kill the girls…they should have just killed them when they had their chance at the beginning of the movie, but then we wouldn’t have a movie.

The Agents all head to Dallas for the final battle. At Shane’s mansion, Edy discovers the BIG RED BLINKING MICROCHIP (not very well hidden) on the watch after it heats up when she stands too close to the. microwave. Kane calls to set up the fight, but Lucas hangs up on them.

The Agents plan to play by their rules now; not Kane’s. However, Donna and Nicole take it personal, and set up a meeting to fight Team Six. Nicole takes one out with a bat, and Donna throws a ninja star in the other’s leg. Team Six is battered, but they regroup.

Meanwhile, Rico rebuilds the tiny helicopter they have been lugging around the whole film for no reason, but this, and he arms it with missiles. The girls lure Team Six into a wooden shed, and they use the helicopter to blow the boys to pieces.

Kane loses all teams, and is humiliated. With the help of Kane’s assistant, Silk, the Agents plant a tracking device on Kane of their own via a crystal necklace she gives him. They plan to track and disrupt Kane every chance they can, but do not arrest him…yet.

The film ends as they all cheers to a successful mission, and a happy ending.

User Rating: Be the first one !
May 25, 2019
4 minutes read
Show More
Back to top button
Close
Close