Ben Stone is a newly minted MD whose medical career takes a sudden detour through the small town of Grady, South Carolina. Known as the Squash Capital of the South, Grady is home to salt-of-the-earth folks who give the West Coast-bound hotshot the seasoning he lacks. 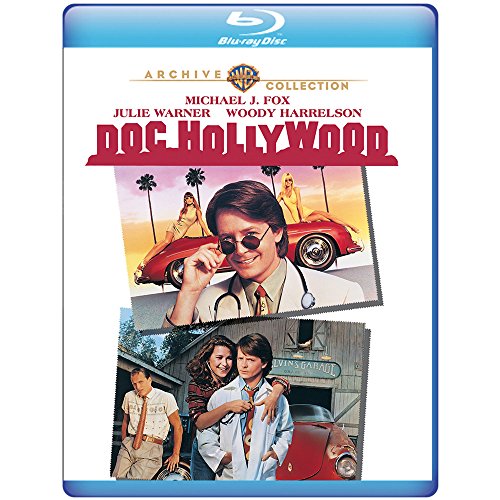 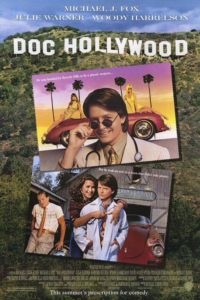 Dr. Ben Stone intends to catapult his career from a manic New York City emergency room into a cushy, high-income dream job as a plastic surgeon in Beverly Hills. As Ben drives his classic Porsche convertible down the Virginia turnpike, he takes a wrong turn. While trying to find the interstate, he barely avoids hitting some cows in the road and destroys the fence of the local judge in Grady, South Carolina.

The judge slaps Ben with 32 hours of community service at the Grady Memorial Hospital, while Ben’s car is getting fixed. Ben is shanghaied to a fishing cabin by the town’s mayor, where they are met by three horny old women with a dinner feast while they create a friendship quilt for Ben. While Ben sleeps off the moonshine, he dreams of a beautiful woman swimming in a lake. When he wakes with a massive hangover, he walks to the nearby lake, where the same beautiful, very naked woman emerges in front of him and disappears just as quickly without a name.

Ben is immediately approached by Mayor Nick and the Grady city council to hire him permanent for $35,000 per annum. Ben laughs at the offer and walks out and starts residency at the hospital with mean Nurse Packer and her humiliating punch clock for Ben’s hours. While Ben readies himself and sets up another interview in Beverly Hills over the phone, he meets the beautiful woman as the local ambulance driver, Lou, and they get off to a rocky start.

With a new doctor in town, the colorful locals come flocking with homemade ailments and remedies, fishing hooks in their thumbs and even reading the mail for a sweet illiterate pregnant couple. At the end of his shift, a young patient causes Ben to believe it is a cardiac arrest and angrily calls the local lazy Doc Hoag to get out of bed and take the kid to emergency surgery when Hoag shows up with a can of Coke and solves the problem in front of the embarrassed Ben.

Ben begins the next day at the local diner where he is forgiven immediately by everyone for the night before as he meets more locals, including the annoying insurance salesman, Hank, who is courting Lou, and Ben realizes he too likes Lou and makes a cheeky bet with Mayor Nick for $10 that he can score with Lou before he leaves. Ben invites Lou to the Mayor’s for dinner the next night.

One happy local gives Ben a pig as a thank you for healing his pains and Ben trades the pig for a car part to fix his Porsche. He then realizes Lou’s 4yo daughter loves the pig and the pig has been sold to the butcher so Ben trades his skills with a knife to save the pig. At the dinner date, Ben realizes Hoag is a drunk bag of hot air and he also realizes he’s falling in love with Lou, against his better judgment, but also realizes that Lou knows about the bet as she rebuffs his advances.

The next day, Ben and Lou go on a bunch of charming house calls and after awhile, Ben reveals he is also from a small town in Ohio and never wants to go back to small town life. On the way home, Nurse Packer calls and says there is an emergency at the hospital and it turns out Hoag is in cardiac arrest as he passes out and Ben literally saves his life, to Hoag’s petulant misery.

The next day is the annual Grady Squash Festival where Ben sees Lou and her daughter and his pig walking in the parade and he immediately falls forever in love. That night at the celebration, in thanks for saving Hoag, the judge commutes the remainder of Ben’s sentence so Ben and Lou have a beautiful dance. Ben walks home and is met by Mayor Nick who tells Ben he belongs in Grady and Ben realizes he has not only fallen in love with Lou but he has also fallen in love with Grady and its adorable residents.

Lou pulls up and invites Ben onto the lake to watch the fireworks and create some of their own but Ben can’t make himself have a one-night-stand with someone he actually loves so Lou drives him home. He decides to leave before it is too late and drives out of town under cover of night. As he gets to the edge of town, he sees the same illiterate pregnant couple having their baby in an emergency on the side of the road. Ben skids to a stop in the middle of the road and as he delivers a breached baby, a huge semi truck plows into Ben’s Porsche, destroying it completely.

The next morning, the couple names their baby after Ben and Ben takes it as a sign he is gonna stay in Grady and marry Lou but Lou tells him she is marrying Hank so he can go to Hollywood and live out his dreams as a doctor. Confused, Ben chases after her but is met by the whole town wishing him a pleasant bon voyage as the sheriff drives him to the airport as Lou cries in her ambulance as Ben drives by, asleep in the squad car.

In Beverly Hills, Ben gets the job due to Hoag’s surprise recommendation to the presiding self-important surgeon. Ben quickly realizes even with the money, the easy sterile environment and the beautiful people, he misses Grady and Lou in his soul. He gets a surprise as Hank and the mayor’s daughter show up with his Porsche and he realizes Lou didn’t marry Hank. Back in Grady, Lou exits the hospital and Ben stands there holding his Pig and we realize Doc Hollywood has finally found the place he can call home.