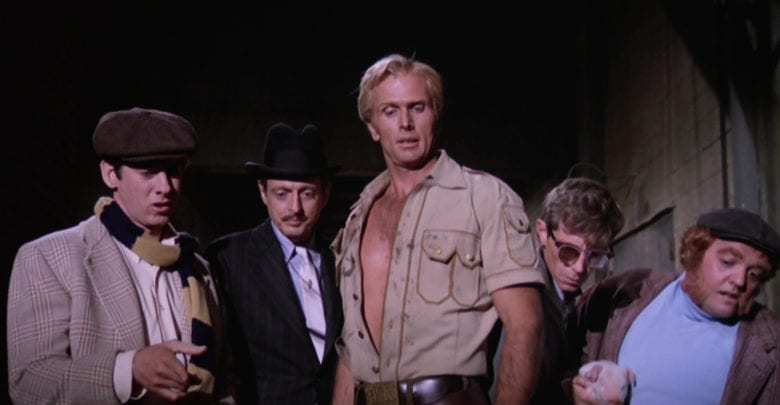 Warner Bros. released Doc Savage: The Man of Bronze in June 1975. George Pal of Around the World in 80 Days fame produced this campy action film. It is the last film he completed before passing away in 1980 at the age of 72. Michael Anderson directs it, and Ron Ely, known for his role as Tarzan in the 1966 NBC television show, plays the pulp fiction icon, Clark “Doc” Savage, Jr. The Breakfast Club’s Paul Gleason, William Lucking, Michael Miller, Eldon Quick, and Darrell Zwerling round out Doc’s Fabulous Five.

This film is a love it/hate it type movie. Superheroes of 1970s had all the camp of the Batman TV series. If you don’t like that type of humor, you probably won’t like Doc Savage: The Man of Bronze. The first half hour starts out strong, but the movie starts to fizzle a bit after that.

The film is set in 1936, and that era is captured well with background references to Captain Blood (1935) and popular boxing matches of the day. It does help that they fly to the jungle where it’s easier to mask modern buildings and technology. The cinematography, combined with John Philip Sousa’s patriotic music, sets a very interesting tone for the overall film. The score has more of a contemporary 1975 theme. It works, but a 1930’s score would be more welcome.

The print of the film isn’t all that great. I have a streaming copy from iTunes. It’s not the best in terms of quality, but you get used to it after a while. I hear the Blu-Ray version is much better, so you may want to watch it on that media.

The acting here is pretty forgettable; pretty flat. While the movie faithfully sticks to Doc and the Fabulous Five’s traits from the books, the actors are more suited to television than a feature film. Physically, Ron Ely fits the part, and he does his best with the lines he’s given, but after that first half hour, you end up wanting more from his character.

Other notable actors in Doc Savage: The Man of Bronze are Paul Gleason who plays electrical engineer, Long Tom Roberts. It’s kind of funny to see him in this early role, but his dickish qualities that shine in The Breakfast Club and Die Hard are still felt at times in this movie. Paul Wexler’s Captain Seas is physically imposing and a credible foil for Doc Savage. Listed at six-feet-six-inches, he’s bigger than even Doc, but their final battle devolves into utter silliness…even for campy films.

1975 also marks the first appearance of actor Michael Berryman. His unusual appearance has relegated him to bit parts in horror films and B movies, but he also starred in One Flew over the Cuckoo’s Nest this year too.

The stunts are pretty good in the film. Dar Robinson sets the tone for them as a Mayan assassin who climbs up the outside of a New York skyscraper to kill Doc. Ron Ely does a sufficient job as well.

Overall, Doc Savage: The Man of Bronze is camp; pure camp. Sure, the acting is a little flat, but the story’s entertaining nonetheless. The soundtrack is great, and the characters stay true to the books. In fact, the film is a pretty faithful adaption of the original 1933 pulp novel, The Man of Bronze, and what fan would complain about that? I give this film 3 MooVee Stars!

At 112 minutes, Doc Savage: The Man of Bronze is approved for all ages—except for teenagers. They’ll be too cool for this film. Make them watch it as a punishment instead.