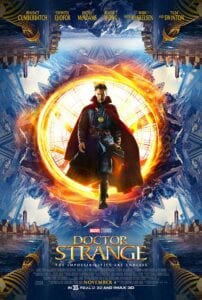 Doctor Strange begins with a sorcerer in a gothic-looking library. He tears the pages from a chained book while his groupies restrain the librarian using bands of energy. This sorcerer then takes two large knives, and decapitates the man before escaping with the pages and his men.

The owner of the book is named the Ancient One, and she goes after them. The sorcerer bends, folds, and reshapes the streets and buildings of the city to help him flee the scene. This prevents the Ancient One from capturing him.

We cut to Dr. Steven Strange performing a delicate brain operation. Just as he finishes, Dr. Christine Palmer brings him an x-ray of a patient with a bullet in his brain. He dismisses the case as hopeless, but Christine insists he help. Strange realizes that the patient is comatose because the bullet poisoned his medulla oblongata, and that he can save him. He heads over to the ER, and performs a manual extraction with forceps; leaving Dr. Nicodemus West humiliated from Strange’s rather large ego.

That evening, Strange dresses for a night on the town in his ridiculously expensive condo. He then high tails it to dinner in his Lamborghini Huracán. On the way, Strange calls an assistant to demand only difficult and interesting cases. As he does so, his car crashes, and plunges into the river. His hands slam into the dashboard as he totals the car.

Once he’s airlifted back to his hospital, he wakes, severely injured, but at least Christine is there. Ironically, they had to rebuild his precious hands, and they are now immobilized with pins and wires.

After several surgeries, his hands remain stiff and shaky. His days as a neurosurgeon are over. Strange is depressed, and breaks off his little romance with Christine. He soon hears of a man named Jonathan Pangborn who somehow recovered from a half-body paralysis. Strange tracks him down, only to find him out playing basketball. Pangborn tells Strange about being cured in Kamar-Taj.

Off Strange goes to Nepal where he winds up wandering the streets of Kathmandu. Someone takes notice, and follows him. The man, Mordo, saves him from some muggers before taking him to Kamar-Taj to meet the Ancient One.

She already knows all about Strange when he arrives. She soon introduces him to her alternate reality filled with hidden universes and dimensions that are used for power and mystical guidance. She begins training him, and he soon learns to open gates to jump across the world. It’s here that Strange first learns the temple is part of a secret group tasked with saving the world from our enemies in other dimensions and universes.

Mordo eventually shows Strange a magic relic that can be weaponized, and he reveals that the relics choose their user, and not vice versa. He reveals to Strange that Kaecilius, who is a former student of the Ancient One, stole a spell from a book, and then escaped with three zealots; the men from the beginning of the film.

They worry that Kaecilius will eventually figure out the spell, and bring forth Dormammu from the Dark Dimension so he can take over the world. However, Strange isn’t there for some ancient crusade. He’s only there to get a cure for his hands.

Strange happens upon the Kamar-Taj library and its humorless librarian named Wong. Strange enjoys the facility immensely, and reads many books from there. Eventually, he brings up the topic of the book that Kaecilius was after, but Wong explains that only the Sorceror Supreme can have access to it.

Once Strange gets the hang of creating portals, he steals more books from the library to learn about astral projection. One night, Strange learns how to use a time-shifting pendant called the Eye of Agamotto. This enables him to see the missing page from the book, but Mordo and Wong let him know that it’s forbidden to use time spells because they can cause time loops. When this happens, the wielder may become stuck in one forever, or let evil into their own universe.

There are three Sanctums; one in London, one in New York, and one in Hong Kong. Kaecilius finally decodes the spell he stole, and uses it to attack the London Sanctum. This attack causes Strange to get tossed through a door into the New York Sanctum.

There, he finds it deserted with many relics. One is a burgundy cloak in a glass case that moves when he looks at it. He goes down a corridor to find three glass doors that are gateways to other places with a dial next to each one that can change its destination with a turn of it.

Kaecilius and his his boys show up, and attack. Strange is forced to improvise a defense. He gets rid of two of the zealots using the gateways. The burgundy cloak springs to life, and it wraps itself around Strange. It helps him subdue the third zealot before restraining Kaecilius.

Strange open a gate, and stumbles into a cleaner’s closet in Christine’s hospital. When he finds her, she performs an emergency pericardiocentesis to drain excess blood from around his heart.

As she does this, Strange separates from his astral body, and continues his fight with the zealot. He ends up killing him with the help of Christine when she uses a defibrillator. She can’t see the zealot, but she knows something is terribly wrong, and is concerned. Once she sews Strange up, and he’s recovering nicely, he returns through a gate.

By now, Kaecilius has escaped, and Mordo helps Strange find him in New York. The Ancient One also comes, and asks Strange take control of the New York Sanctum. They’re very surprised and impressed that the magical cape, called the Cloak of Levitation, chose Strange. However, he’s very reluctant to take up the Ancient One’s offer until they tell him more about Kaecilius. He also demands to know more about the Ancient One’s use of dark magic to prolong her life.

Kaecilius shows up again, this time with more zealots, so Strange creates a Mirror Dimension for the fight. As it spills out into the street, Kaecilius shape-shifts the city to disorient Strange. When the Ancient One returns to help, she is mortally wounded. Strange takes her to Christine, but it’s too late to save her. Strange follows her spirit in his astral form, and they talk one last time about Strange taking care of the New York City sanctum.

Back at the sanctum, Strange and Mordo figure Hong Kong will be next on Kaecilius’ list. They use a gate to head to the Hong Kong Sanctum, but it’s now overrun, and a destructive force envelops the city. Dormammu’s Dark Dimension now grows from the Sanctum.

Strange uses the Eye of Agamotto to reverse the process, but Kaecilius stuns Strange, and stops it before it can be reversed. Strange has a plan which leads him to the heart of the Dormammu’s Dark Dimension. There, he creates an infinite time loop, and confronts Dormammu. Dormammu kills Strange many, many times, but after each victory, the time always resets to the moment Strange first confronted him.

This pisses Dormammu off to no ends, and he eventually agrees to leave Earth alone in exchange for Strange stopping the time loop. Strange returns to the street, and sends Kaecilius and his zealots back into the Dark Dimension just before it vanishes.

Mordo is now pretty upset that Strange broke the rules to use the time pendant in a way that the Ancient One forbid. Before she died, the Ancient One gave Strange a warning that Mordo was very big on following the rules which is both his weakness and his strength. Strange’s flexibility will be an important factor if they wish to be successful in working together. However, Mordo just retires from the group, and leaves.

Strange takes over the New York Sanctum where he returns the Eye of Agamotto to its guarded place at Kamar-Taj. Wong tells him the eye is an Infinity Stone.

In a mid-credits scene, Doctor Strange talks to Thor about why he brought Loki to Earth. Once he reveals that they are searching for Odin, Strange offers to help on the condition that the three return to Asgard once their mission is completed.

In another post-credits scene, Mordo takes away Jonathan Pangborn’s magic that healed his paralysis because there are now too many sorcerers.