In New York a lone man stalks the streets at night. He strangles and then cannibalizes men and women he comes across—young and old. After six such killings, the local newspapers have dubbed him The Moon Killer and, the police have labeled a scientist at the Academy of Surgical Research as a person of interest. Now a wisecracking reporter sets out to get a scoop and crack the case before anyone else can. 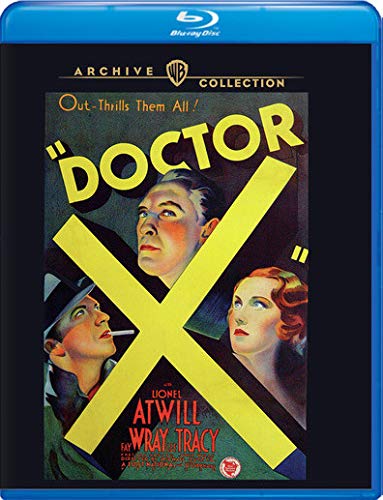 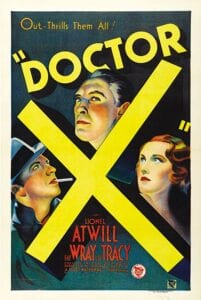 In Doctor X, Lee Taylor is a reporter investigating a serial murderer in New York City who only seems to kill at night during a full moon. Each victim is strangled to death before a surgical scalpel slices the back of their head, and the killer eats part of their brain. The only witness descriptions of the killer is one of a horribly disfigured monster.

After the latest victim is found, the police take the corpse to Doctor Xavier for an autopsy and his medical opinion on the matter. However, the police reveal they have an ulterior motive for bringing the victim there. They have somehow discovered that the scalpel used to slice open each victim is only used at Xavier’s medical institution. In addition to that, all the victims were killed nearby.

Dr. Xavier introduces the police to the other professors who work at his laboratory. There is Dr. Wells who studies cannibalism, but the police rule him out as a suspect because his left hand has been amputated; making a strangulation nearly impossible. Dr. Haines seems to be something of a pervert as the group walks in on him in the dark with a dirty magazine. That’s a bit suspicious to them. Dr. Duke is a wheelchair-bound grouch who won’t cooperate with anyone, and finally Dr. Rowitz who studies the psychological effects of the moon.

Dr. Xavier is very concerned about the negative press a police investigation would bring to his institution, and convinces the police to give him 48 hours to conduct his own internal investigation before the police raid his facility and take everyone in for questioning. They reluctantly agree.

As this is going on, Taylor is outside snooping around to try to get an inside scoop on the story. Joan Xavier catches him out on the fire escape, and forces him down with a gun. He passes himself off as part of the police investigation team and leaves. However, the next day, Taylor’s story notes her father as a person of interest in the killings, so Joan will be quite cold to the fella for the rest of the film even though he’s very smitten with her.

Dr. Xavier takes everyone to his beach estate to conduct a rather unorthodox experiment to find the truth. Dr. Wells will help with the experiment. Since he’s missing a hand, and the killer has two hands, he’s still ruled out. Taylor has managed to make it there too, and hides in a closet until he has the chance to snoop around some more.

In Xavier’s lab, we find an overly complicated series of contraptions that use electricity to measure each person’s heart rate which is monitored from an equally elaborate thermostat-looking tube about six feet tall. Then, with the help of his butler and maid, Otto and Mamie, he has them reenact the murders to measure each scientist’s response via that monitor.

During the experiment, Dr. Rowitz’s monitor measures a very high heart rate, and the test seems to prove him as the killer. However, a blackout occurs, and there is mass confusion in the darkness. As power returns, we find Dr. Rowitz strangled to death and a scalpels incision in the back of the head…this rules him out as a murder suspect. Later that night, Dr. Xavier goes to check on Rowitz’s corpse to find he’s been cannibalized.

The following evening, Dr. Xavier wants to give his experiment another try as he’s nearly out of time from the cops busting up his institute. He has Otto and Mamie re-enact another of the murders, but Mamie is now too frightened to play her part. Joan volunteers to play the part.

This time, the three remaining suspected professors are handcuffed to their seats while Dr. Wells runs the experiment from the next room. However once cuffed, it’s revealed that Dr. Wells is in fact the killer when he strangles Otto using a left hand he’s created using what he calls synthetic flesh. He’s been using it to make artificial limbs and his horrific mask to carry out the murders.

Now he turns his attention to Joan, whom he plans to kill while the three professors helplessly look on. Just as Dr. Wells is about to strangle Joan, Taylor (remember him?) shows up, and defends her. He eventually manages to set Dr. Wells on fire with a kerosene lamp before Wells crashes through the window and falls to his death on the ocean shore far below.

With the day saved, Taylor gets his big story and the girl for a happy ending.