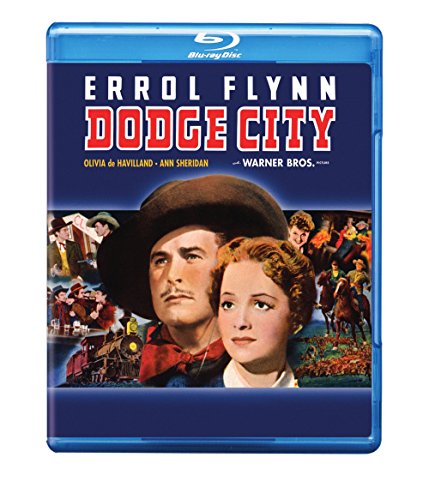 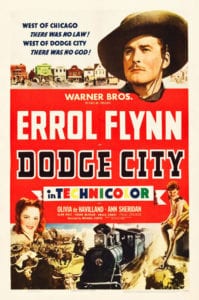 Dodge City begins with Colonel Dodge arriving to town on his new railroad line which links the frontier village to the East Coast. Fast forward two years, and Dodge City is now the longhorn capital of the world. Besides settlers though, the town attracts seedy men, outright thieves, and cold-blooded killers.

Jeff Surett leads a gang of such men out to control the town. They stop at nothing to swindle legitimate people out of their money, and either kill or run out of town any new sheriff.

Wade Hatton is an Irish cowboy who helped the Colonel bring the railroad to Dodge City. Now, he leads a herd of settlers to town from the East coast. Rusty and Tex, Hatton’s trusted companions who’ve stuck with him over the years, ride with him as well as many other loyal men.

Abbie Irving and her alcoholic brother, Lee, are among the settlers, but Lee dies after he causes a stampede, and the cattle trample him to death; leaving Abbie to fend for herself.

Once in town, Hatton finds the its peaceful citizens living in fear, and they ask Hatton to be sheriff to clean up the town. Initially, he declines their offer, but when the young Harry Cole dies during a shootout with Surrett’s men, Hatton agrees to take the job.

He deputizes Rusty and Tex, and the men clean up the town. Eventually, Abbie and the newspaper writer Joe Clemens write a story which can convict Surrett and his men of many of the town’s murders, but before it’s published, Surrett has his man Yancey kill Clemens.

Hatton arrests Yancey, but when word gets out that Yancey is in jail, the town forms a mob to lynch him. Hatton and Rusty, wanting Yancey to stand trial, smuggle him out of the jail in a hearse, and they all get on a train to Wichita.

Unfortunately, Surrett and his men are waiting for the move, and sneak on board the train to free Yancey. During a gunfight for him, they accidentally set the baggage car on fire. Abbie, who’s on the train too in an effort to hide her from Surrett’s men until the trial, inexplicably enters the baggage car. Surrett grabs her, and uses her as bait to get Yancey back. They lock Hatton, Rusty, and Abbie in the burning car, and escape as the rest of Surrett’s men ride up to the train with some extra horses.

However, Hatton, Rusty, and Abbie escape the burning car, and a gunfight ensues between them on the train, and Surrett’s men on horseback. They kill Surrett, Yancey, and some of his men in the battle.

With the town now under control, Hatton and Abbie make plans to marry, but Colonel Dodge shows back up to town. He asks Hatton to now help clean up Virginia City in Nevada. Hatton turns down the offer so he can marry Abbie, but she overhears the conversation outside the room.

Knowing he can help settle the West, Abbie enters the room, and tells the Colonel that she and her new husband will help clean up Virginia City; much to Rusty and Tex’s delight. The film ends with the group riding off into the sunset to Nevada.