After his wife’s death, Dr. John Dolittle decided to hide from the world with his beloved animals. But he must take a journey to a mysterious island to find a healing tree, which is the only medicine that can help the dying Queen Victoria in Buckingham Palace. 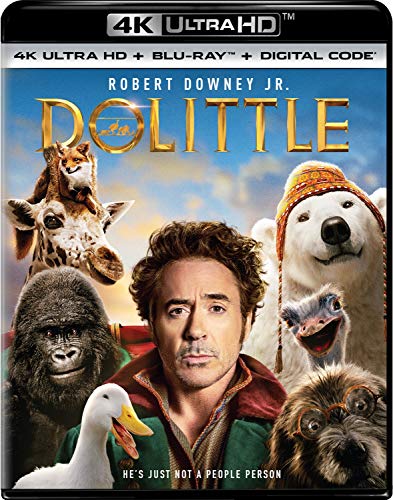 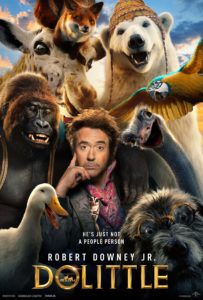 Dr. John Dolittle (Robert Downey Jr.) is a Welsh veterinarian in Victorian era Britain. Dolittle possesses the amazing ability to talk to animals. However, after his wife Lily (Kasia Smutniak) dies at sea, Dolittle retreats from society and only tends to animals on his estate. Tommy Stubbins (Harry Collett) is a young boy who accidentally wounds a red squirrel named Kevin (Craig Robinson). He is guided to take the squirrel to Dolittle for treatment by a macaw named Poly (Emma Thompson).

Dolittle is summoned to Buckingham Palace by Queen Victoria (Jessie Buckley). The Queen is suffering from a mysterious deadly sickness that no one can quite diagnosis. Initially Dolittle refuses the invitation until Poly persuades him that he must begin to reconnect with the human world. Dolittle examines the Queen and learns that the Queen has been poisoned by nightshade in her tea. Dolittle tells members of the Queen’s court, including Lord Thomas Badgley (Jim Broadbent), Dr. Blair Müdfly (Michael Sheen), and Lady Rose (Carmel Laniado), that the only cure is the magical fruit of Eden from the faraway land of Lily’s birth.

Dolittle is joined by Kevin, monkeys Elliot and Elsie, Chee-Chee (Rami Malek) the gorilla, Yoshi (John Cena) the polar bear, Plimpton (Kumail Nanjiani) the ostrich, Dab-Dab (Octavia Spencer) the duck, and Mini (Nick A. Fisher) the sugar glider. Poly, Betsy (Selena Gomez) the giraffe, and Tutu (Marion Cotillard) the fox help Tommy escape from his home so that he can join Dolittle on his journey. Lord Badgley sends Dr. Müdfly to stop Dolittle from accomplishing his goal. Müdfly went to school with Dolittle and holds much resentment as to Dolittle’s accomplishments and abilities. Dolittle leaves his dog Jip (Tom Holland) and a walking stick named Sticks behind with Lady Rose to watch over the Queen. Dolittle’s boat is attacked by Müdfly at sea. They escape by harnessing a whale named Humphrey (Tim Trelor) who pulls the boat to safety.

Dolittle’s boat makes it Lily’s island, where Dolittle reveals to Tommy that he has been banned from the island under penalty of death by Lily’s father, King Rassouli (Antonio Banderas). The King holds Dolittle responsible for the death of his daughter. Dolittle needs Lily’s journal which details the directions to the fruit tree. Despite their clever disguises, Dolittle and Tommy are both apprehended by the King. Dolittle is placed into a cage with Barry (Ralph Fiennes), a ferocious tiger with sever mother issues. The King intends for Barry to kill Dolittle, but he adopts Tommy as one of his people. Just as Barry is about to kill Dolittle, Chee-Chee arrives and finds his courage. He knocks out Barry for Dolittle. Meanwhile, Tommy steals Lily’s journal and reunites with Dolittle just as he is captured by Müdfly. Müdfly takes the journal and sinks Dolittle’s ship. Rassouli loans Dolittle a boat to honor his daughter after realizing how much Dolittle loved Lily.

Dolittle and Müdfly arrive at the island at about the same time. Dolittle takes a backway into a secret cave where the cure tree is rumored to grow. The two groups encounter each other again and awake a dragon named Ginko-Who-Soars (Frances de la Tour) who protects the tree. The dragon wipes out most of Müdfly’s men and knocks Müdfly himself down a hole. However, the dragon soon collapses from internal pain. Dolittle examines the dragon and diagnoses an internal blockage. Dolittle removes the blockage and the grateful dragon shows Dolittle the tree with the fruit.

Dolittle heads back to London and arrives just as Lord Badgley is just about to pronounce the Queen dead. Dolittle and his animals fight the Royal Guard who Badgley dispatches to stop Dolittle, while Tommy delivers the juice from the fruit to the Queen. The Queen awakens, completely recovered. Sticks reveals to Dolittle that Lord Badgley poisoned the Queen in order to take the crown for himself, and it was he who ordered Müdfly to stop Dolittle’s exhibition. Badgley tries to fight his way out of the Palace but is stopped by Yoshi. The Queen has him arrested for treason, and thanks Dolittle for saving her life.

In the aftermath, Dolittle rejoins human society on a more permanent basis while maintaining his special relationship with animals. He takes on Tommy as his apprentice and re-opens his sanctuary.