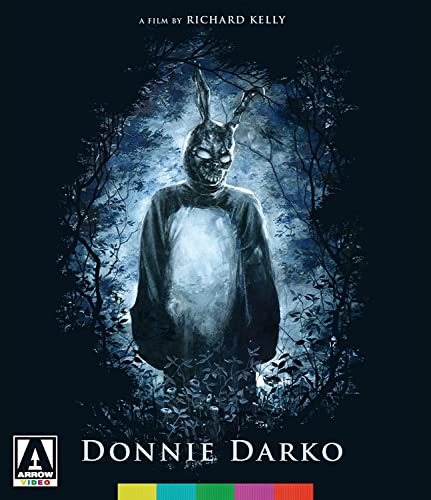 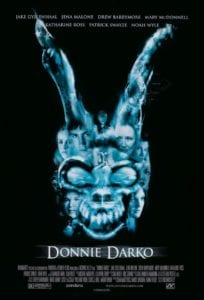 None of this is straightforward so here we go for a comparative breakdown.

Opening to the sound of thunder, we see a young adult lying in the middle of a road. He wakes and gets up. Smiling, he rides his bike home through suburbia.

Over dinner, we meet the Darko family, and find out Donnie has stopped taking his meds which we see later on in the bathroom; right next to Old Spice splash-on. Ultimately, this means trouble.

Imaginary or not, Frank, is a man-sized bunny rabbit who wakes Donnie from his slumber; encouraging a sleepwalk out of the house towards the local golf course. There, Frank begins his mysterious confessions about The End.

Randomly, an aircraft engine lands on-top of Darko’s roof, and slams into Donnie’s bedroom. Thanks to Frank, Donnie was not in bed, and nobody else was hurt.

Authorities won’t let the family discuss what happened, or give any further information. They treat the family to a stay at the local Holiday Inn while contractors fix their house up (and as the investigation continues).

Donnie visits his doctor on a regular basis as she delves into his imaginary world teetering into reality.

Frank tells Donnie he can do anything he wants, and the school floods out amidst an axe lodging into a solid iron sculpture.

After Frank admits he has time travelled, Donnie approaches his science teacher about it. His teacher gives some insight on worm holes, but he later has to discontinue the conversation in light of not wanting to lose his job.

Local elderly lady, Grandma Death, whispers something in Donnie’s ear. She later turns out to be the author of a time travel book that the teacher gave Donnie.

At home, when watching football, Donnie observes a James Cameron’s The Abyss like liquid stream coming out of the chest of people around him; leading them around. Not sure why.

His doctor meets with his parent’s telling them of Frank. She suggests Donnie ups his the meds.

Patrick Swayze, in a rare dark role, portrays well-being scientologist, Jim Cunningham, inspirational mentor at the school. However Donnie believes him to be the Anti-Christ.

Gretchen goes with Donnie to see a Halloween screening of The Evil Dead. That same night, Samantha Darko performs in Sparkle Motion at the school entertainment showcase.

Under the guidance of Frank, who reveals whats under the bunny suit–a fellow teen with a eye shot out–Donnie leaves Gretchen asleep in the cinema. He goes off to burn down Cunningham’s house. He then returns to the theater before Gretchen wakes.

Elizabeth is accepted to Harvard, and she agrees with Donnie to have Halloween party while their parents are away. Donnie leaves the party with a couple of friends. After another of the ongoing scuffles with some trouble makers, a Frank’s Trans Am crashes outside of Grandma Deaths’ house; killing Gretchen.

Donnie shoots Frank, wearing the bunny suit, in the eye. Donnie carries Gretchen home while storm clouds form similar to the start of the film.

An excellent cover version of Mad World plays during a montage of all the characters in their current situations; jumping back to Oct 2 in a time loop.

The jet engine drops again, with Donnie in the bedroom. He dies instantly, and we soon see paramedics carry him out of the house.

Gretchen rides up on pushbike, and asks a kid what’s happening. She then admits she doesn’t know Donnie.

His mom goes off to smoke next to a tree. She waves to Gretchen…or is she waving to the boy next to her as he lifts up his hand, and the credits roll. Minds are numb.