In the mean and deserted streets of Detroit, Rocky is a young woman who wants to start a better life for her and her sister in Los Angeles. She agrees to take part in one last robbery of a house owned by a wealthy blind man with her boyfriend Money and their friend Alex. However, the blind man turns out to be a more ruthless adversary than he seems with a house filled with many dangers. Now, the group must find a way to escape his home before they become his latest victims. 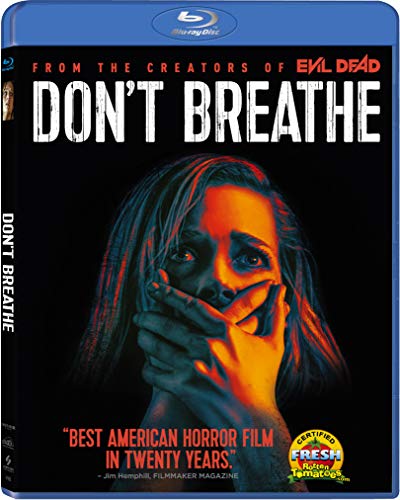 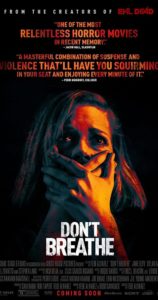 Rocky (Jane Levy), Alex (Dylan Minnette), and Money (Daniel Zovatto) are three small time crooks who make their living breaking into people’s houses and stealing valuables. They access the homes by using Alex’s access to the security services provided through Alex’s father’s business. Rocky and her friends never make as much money as they need from their heists due to their fence undervaluing the items they steal. Rocky dreams of a better life outside of Detroit and has ambitious plans to move to California with her younger sister Diddy (Emma Bercovici). Rocky wants to make the move to get her and Diddy away from her abusive mother Ginger (Katia Bokor) and her alcoholic boyfriend.

One day, Money comes up with a plan to make a big heist after receiving information from their fence. The tip is that a local Gulf War veteran, Norman Nordstrom (Stephen Lang), has received a $300,000 in cash from a civil settlement. The settlement was for the premature death of Nordstrom’s daughter who was killed in a car accident involving a wealthy young woman named Cindy Roberts (Franciska Törőcsik). However, Nordstrom has never deposited the money into any bank and lives in a rundown house in an abandoned neighborhood in Detroit. Money theorizes that the money is in Nordstrom’s house somewhere. Alex is reluctant to become involved in the heist, but after Rocky pleads for his assistance so that she can make the move to California, Alex agrees to one last heist.

The three crooks begin casing the house in preparation for the burglary. They learn that Nordstrom is blind and has a large rottweiler dog. On the night of the burglary, they drug the rottweiler and put it to sleep. They break into the house and slide a sleeping gas bottle into Nordstrom’s bedroom. The trio begin looking through the house and discover a lock on a door to the basement. Money assumes the money is hidden there, so he shoots the lock. The gunshot awakens Nordstrom who was not knocked unconscious by the gas. Nordstrom and Money engage in a physical fight, but the war veteran overpowers the smaller Money and takes his gun. Nordstrom shoots Money and kills him while Rocky and Alex watch silently.

After the murder, Nordstrom frantically runs around the house to secure it again. Rocky watches Nordstrom open a hidden safe in the closet where she is hiding. She remembers the code and opens it while Nordstrom is away. Inside she finds the money and places it into a bag. Nordstrom finds Rocky and Alex’s shoes by the back door where they left them and realizes that there are two other people in his house. He returns to his safe and finds it empty. He begins to blindly search the house for the other two intruders.

Meanwhile, Rocky and Alex evade Nordstrom and enter the basement to escape through the outside basement entrance. In the basement, they find a restrained and gagged pregnant woman who Rocky recognizes as Cindy Roberts. Cindy begs them to help her escape. Rocky and Alex free her and attempt to open the storm cellar door. Nordstrom is waiting for them outside and shoots at them, accidentally killing Cindy. While Alex and Rocky retreat into the basement area, Nordstrom breaks down and cries over Cindy’s dead body. He then shuts off the lights to the house which plunges the basement into total darkness. Nordstrom chases Alex and Rocky through the basement as they stumble around in the dark. Alex manages to knock Nordstrom unconscious, and he and Rocky return to the upstairs area.

There is nothing a man cannot do once he accepts the fact that there is no God. Norman Nordstrom (Stephen Lang)

The pair block the basement door, but they encounter the awakened rottweiler. Alex and Rocky run upstairs and hide in Nordstrom’s bedroom to avoid the dog. Nordstrom also awakens and escapes from the basement and chases the burglars. Rocky escapes the bedroom by climbing through the ventilation duct. Alex is knocked out the bedroom window and falls onto the glass ceiling of Nordstrom’s work room a floor below. Alex is knocked unconscious. Nordstrom places the rottweiler into the ventilation duct to chase after Rocky. Nordstrom then returns downstairs just as Alex is awakening on the glass ceiling. Nordstrom shoots out the glass, dropping Alex into the room. The two fight until Alex is cornered in the utility room where Money’s body has been placed. Nordstrom appears to stab Alex with garden shears. The rottweiler chases Rocky through the duct work until she is captured by Nordstrom in the basement. Nordstrom knocks her unconscious.

Rocky awakens to find herself in the restraints that once held Cindy. Nordstrom reveals that Cindy was pregnant with a replacement for his daughter. With her death, Nordstrom needs to find a new mother for his child. Nordstrom prepares to artificially inseminate Rocky using a turkey baster, promising to let her go after she gives him a child. Rocky struggles against the procedure until Alex, who tricked Nordstrom into stabbing Money’s corpse instead of him, saves Rocky and handcuffs Nordstrom.

Rocky and Alex hurriedly attempt to leave the house with the money. Once at the front door, Alex attempts to enter the security code to unlock the door. A freed Nordstrom returns to the ground floor and shoots Alex dead. Rocky flees out the front door as she is chased by the rottweiler. She hides in an abandoned car where she is temporarily trapped. She tricks the dog into getting into the car so that she can escape, but she is quickly recaptured by Nordstrom. Nordstrom drags her unconscious body back to his house through the abandoned neighborhood.

Once back at the house, Rocky disorients Nordstrom by setting off the alarm system. She then beats him repeatedly with a crowbar before pushing him down the open shaft to the basement. The gun fires into his side as he falls. Rocky believes Nordstrom is dead and flees with the money before the police arrive in response to the house alarm.

Sometime later, Rocky and Diddy see a news report about the incident. The story reports that Nordstrom is in stable condition and is recovering in a hospital after killing two lethal intruders in self-defense after they broke into his house. The report does not mention the third burglar, Cindy Roberts, or the missing money. Rocky and Diddy board a train to Los Angeles where a new life awaits them.