Kate Dibiasky (Jennifer Lawrence), an astronomy grad student, and her professor Dr. Randall Mindy (Leonardo DiCaprio) make an astounding discovery of a comet orbiting within the solar system. The problem – it’s on a direct collision course with Earth. The other problem? No one really seems to care. Turns out warning mankind about a planet-killer the size of Mount Everest is an inconvenient fact to navigate. With the help of Dr. Oglethorpe (Rob Morgan), Kate and Randall embark on a media tour that takes them from the office of an indifferent President Orlean (Meryl Streep) and her sycophantic son and Chief of Staff, Jason (Jonah Hill), to the airwaves of The Daily Rip, an upbeat morning show hosted by Brie (Cate Blanchett) and Jack (Tyler Perry). With only six months until the comet makes impact, managing the 24-hour news cycle and gaining the attention of the social media obsessed public before it’s too late proves shockingly comical – what will it take to get the world to just look up? (Courtesy of Netflix) 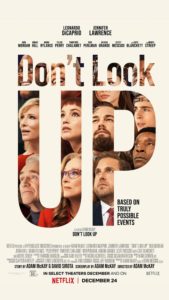 At a remote observatory, Michigan State University astronomy Ph.D. candidate Kate Dibiasky (Jennifer Lawrence) is doing work for her doctorate. She accidentally discovers a previously unknown comet approaching Earth. Her professor, Dr. Randall Mindy (Leonardo DiCaprio), assists her with her calculations for how near it will pass Earth and conclude that the comet will impact the Earth in about six months. The comet is also large enough to cause an extinction level event (ELE) that will wipe out all life on Earth. NASA confirms Randall and Kate’s findings and contacts the head of Planetary Defense Coordination Office, Dr. Teddy Oglethorpe (Rob Morgan). Teddy, Kate, and Randall are immediately dispatched to the White House to brief the President of the United States, Janie Orlean (Meryl Streep). After being made to wait for over a day, the trio is met with apathy by President Orlean and her Chief-of-Staff son Jason (Jonah Hill).

After the meeting Teddy encourages Kate and Randall to leak the news to the media. Their first stop is a light news morning talk show hosted by Brie Evantee (Cate Blanchett) and Jack Bremmer (Tyler Perry). The hosts do not take the threat seriously due to their interests in pop culture and social media. Kate loses her temper on air and rants about how they are all going to die in six months. Her outburst causes her to become a social media meme and results in her boyfriend (Himesh Patel) breaking up with her. However, Randall becomes the face for the science on the comet due to his good looks. Despite Randall’s best efforts, the news of the comet’s approach receives little public attention. To make matters worse, the director of NASA publicly questions the validity of Randall and Kate’s calculations.

Not long after, President Orlean becomes involved in a sex scandal when nude photos of her are discovered on the phone of a porn star that she nominated for the United States Supreme Court. The President decides to divert attention from the scandal by focusing on the danger from the comet. Randall, Kate, and Teddy are displeased with her motives but are happy that the President is giving the issue the attention it deserves. The President confirms the threat of the comet and announces a project to launch a spacecraft that can strike and divert the direction of the comet using nuclear weapons. The plan proves successful…in improving the President’s approval ratings.

What’ up, y’all? I’m the last man on Earth. Shit’s all fucked up. Don’t forget to like and subscribe. We out here. Jason Orlean (Jonah Hill)

A few months later, the world prepares for the launch of spacecraft, piloted by President Medal of Freedom recipient and known racist Colonel Benedict Drask (Ron Perlman). The launch is successful, but within minutes, the ship and the supporting missiles all turn around and return to Earth. President Orlean announces that they have scrubbed the mission at the request of billionaire CEO of BASH and one of Orlean’s top donors, Peter Isherwel (Mark Rylance). Isherwel has discovered the comet is composed of trillions of dollars’ worth of rare-earth elements. Isherwel and the White House agree and plan to commercially exploit the comet by fragmenting the comet with smaller bombs and then recovering the smaller pieces from the ocean. Isherwel’s plan is not peer reviewed and seems to be short sighted. Kate and Teddy disapprove of the project, so they are removed from the team, while Randall is promoted to National Science Advisor. Randall conducts a series of public service announcements to support the plan and begins an affair with Brie Evantee much to the chagrin of his long-suffering wife, June (Melanie Lynskey). At the same time, Kate reveals the government’s plan to let the comet hit Earth which sparks riots worldwide. Kate is threatened with incarceration, so she steps out of the public eye.

The world becomes sharply divided over the issue of the comet. Half the world wants the comet to be destroyed while the other half want to mine the comet to create jobs. Eventually, a substantial portion of the world begins to question whether the comet even exists despite its appearance in the sky. This group begins the mantra of “Don’t Look Up” which President Orlean and her supporters use as a rallying cry to drum up public support.

Kate returns home to Illinois and takes a job as a convenient store clerk. She begins a relationship with local stoner Yule (Timothée Chalamet). Randall begins to question the science behind Isherwel’s plan and has a public meltdown on Evantee’s show where he rants about the end of the Earth. Randall is removed from the Orlean’s administration and subsequently reunites with Kate. Kate, Teddy, and Randall organize a protest movement on social media which tells people to “Just Look Up” and calls on other countries in the world to conduct operations of their own to save the Earth. When Orlean cuts out China, India, and Russia from the comet mining deal, the three countries conduct a joint attempt of their own to deflect the comet. However, their spacecraft explodes on the launch pad which potentially seals the fate of the world.

The day comes for the launch of Isherwel’s spacecraft. The launch quickly goes wrong and fails. Isherwell, the President, and several other wealthy people quietly board a spacecraft designed to keep its passengers alive cryogenically while it travels to the nearest Earth-like planet. Orlean offers Randall, and Randall alone, a place on the ship. Randall, who has returned to his home with June and his adult sons (Robert Hurst Radochia and Conor Sweeney) to have a last dinner with his family, Kate, Yule, and Teddy, declines the President’s offer. Orlean also neglects to take her son on the spacecraft as well. The comet hits the planet and destroys all life on Earth except for Jason, who survives.

22,740 years later, the passengers on Isherwell’s spacecraft land on a lush alien planet. The passengers all exit the spacecraft nude and empty-handed. Orlean is quickly killed and eaten by an alien creature called a Bronteroc. The group is quickly surrounded by a herd of Bronterocs and is presumedly killed off screen.