Having spent most of her life exploring the jungle with her parents, nothing could prepare Dora for her biggest challenge yet – High School. When her parents mysteriously disappear while searching for the Lost City of Gold, Dora must swing into action and lead a group of ill-equipped high schoolers on a wild quest to save them. 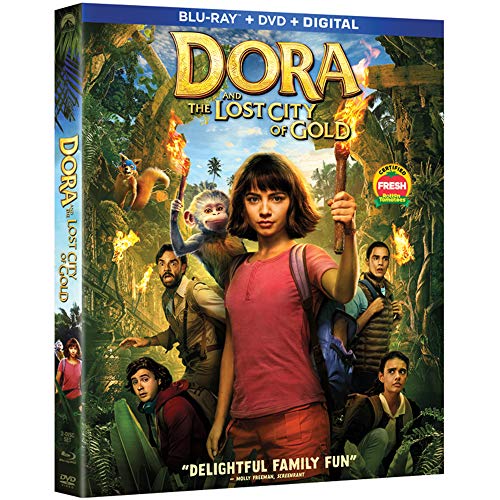 Dora And The Lost City Of Gold

‘Dora and the Lost City of Gold’ Movie Summary 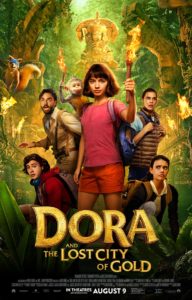 The film begins with a 6-year-old Dora Márquez (Madelyn Miranda) living in the Peruvian jungle with her professor parents, Cole (Michael Peña) and Elena (Eva Longoria). She spends her days going on adventures with her friend, a monkey named Boots (Danny Trejo), her 7-year-old cousin Diego (Malachi Barton), and imaginary friends Backpack (Sasha Toro) and Map (Marc Weiner). However, the day comes when Diego and his family return home to Los Angeles while Dora and her parents remain in the jungle to search for the hidden Inca city of gold called Parapata.

Ten years pass, and Dora’s parents have been able to determine the location of Parapata. However, they feel Dora isn’t quite ready to join them for the treacherous journey. They send the now 16-year-old Dora (Isabela Moner) to Los Angeles to live with Diego (Jeff Wahlberg), her Aunt Sabrina (Pia Miller), Uncle Nico (Joey Vieira), and Abuelita Valerie (Adriana Barraza) while they travel to the lost city.

On her first day of school, Dora meets fellow students, the uptight Sammy (Madeleine Madden) and socially awkward Randy (Nicholas Coombe). Sammy is the school know it all, and she sees Dora as her rival because she’s smarter than her. Randy is a bullied kid who can hold his breath for seven full minutes. Dora’s kindness towards him is something he’s never had from other students in school, and he develops an immediate crush on her.

While Dora enjoys exploring her new life, her behavior embarrasses Diego who’s just trying to make it through school without bringing any unwanted attention to himself. When Dora dances to a conga song at the school dance, it draws so much attention to her and Diego that several school bullies begin making fun of them. Embarrassed, Diego walks out of the dance, and Dora tries to comfort him. However, Diego snaps at her and tells her that she’s in a different type of jungle now, and people are making fun of her.

The next morning is a class field trip to a museum. Dora, Diego, Randy, and Sammy are teamed together as part of a photo treasure hunt. The group who takes a picture of the oldest artifact in the museum wins. A woman named Christina X (Natasa Ristic) suddenly appears to them wearing a museum uniform. She tells them about the Egyptian exhibit being unpacked downstairs which would have the oldest artifacts in the building. She leaves the door leading down to it open for the kids to follow after she walks through it.

Once the group gets down there, they find Christina X is with two men named Powell (Temuera Morrison) and Viper (Christopher Kirby). The three are hired mercenaries who toss the group in a large crate and ship them to Peru. When they land, a man named Alejandro (Eugenio Derbez) suddenly shows up and helps them escape. He claims to be a friend of Dora’s parents, but before he can get them out of the little airport they landed in, Swiper (Benicio del Toro) steals Dora’s map for the mercenaries.

Once safe, Alejandro tells Dora that her parents are now missing, and the mercenaries are looking for Parapata to steal its gold. Dora happily accepts Alejandro’s offer to help her find her parents. Diego comes along to help Dora—partially because she’s family. Randy and Sammy don’t really have a choice but go along if they hope to make it out of the jungle.

After many treacherous hazards ranging from quicksand, old Inca booby traps, and attacks from invisible jungle guardians, Sammy bonds with Dora and becomes nicer to everyone. Dora and Diego reconcile. Diego reveals his crush on Sammy. At one point, an old woman (Isela Vega) shows up to dissuade the group from completing their quest. However, Dora insists on continuing on.

Eventually, Dora finds her parents outside the lost city of Parapata. Unfortunately, Alejandro seizes the moment to reveal he’s the mercenaries’ leader and he calls them over to their location to capture them and the rest of the gang. Boots has been watching from the jungle, and he helps them escape. However, Dora’s parents are still Alejandro’s prisoners, and Boots gives Dora a pep talk to help her regain her confidence. Now the teens must find the way inside Parapata themselves if they are to find the treasure and use it to trade for her parent’s release (and hopefully to keep the mercenaries from killing them all).

The group uses team work to open the gates of the lost city, solve the temple’s treacherous puzzles, and dodge its traps. Eventually they make it to the central shrine. Unfortunately for them, Alejandro and his mercenaries have secretly followed them in. When he attempts to steal the central idol for himself, he falls into the Inca’s last trap, but it doesn’t kill him.

The old woman returns with the guards of Parapata to arrest everyone including the mercenaries. The old woman transforms into Princess Kawillaka (Q’orianka Kilcher), the ruler of Parapata. She scolds everyone for continuing on their journey, but Dora speaks to her in Quechua. She lets her know she, the other kids, and her parents are explorers; not treasure hunters like the mercenaries. Princess Kawillaka tells Dora to prove it, and correctly solve the last Incan puzzle—which she does. Satisfied, Princess Kawillaka allows the family and teens to leave after granting them a glimpse of their greatest treasure.

However, when Swiper steals the gold idol, it angers the Gods, and the city begins to crumble. As everyone flees, Dora realizes what needs to be done. She takes the idol back from Swiper and returns it to its proper spot, appeasing the Gods once again. With the ordeal over, Diego and Sammy kiss as Dora and her parents stare at them.

The group returns to the jungle home of Dora’s parents. The other teens’ parents are waiting for them there and are happy to see them all safe. Our on a boat dock next to the home, Dora’s parents tell her they are going on another jungle adventure and want her to join them this time. However, Dora decides to return to school in Los Angeles. Proud but sad, her parents understand, but begin crying uncontrollably once Dora walks back into their home.

During the credits, Dora and her friends celebrate at another school dance. They sing We Did It while dancing a crazy dance. This time, the school joins in their celebration. Alejandro remains locked up in Parapata, but the other mercenaries’ location is unknown. Swiper is now with Dora’s parents. They yell at him for trying to steal from them for a happily ever after.