In Double Indemnity, Fred MacMurray is an insurance salesman that Barbara Stanwyck into killing her husband for the insurance money. Edward G. Robinson is MacMurray’s co-worker and mentor whose job is to find phony claims. MacMurray comes up with a murder plot that will trigger a double indemnity clause to double the payout. Something in Robinson’s gut smells a rat. 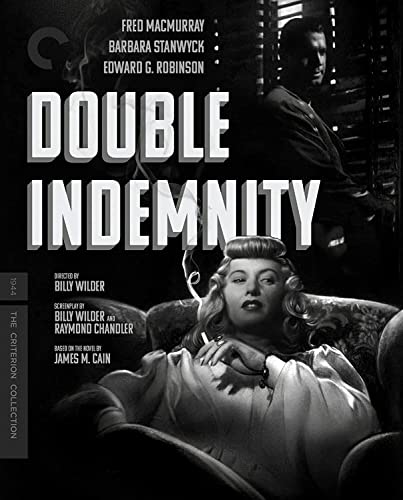 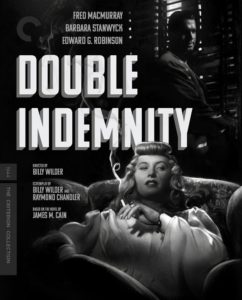 Billy Wilder’s Double Indemnity begins in 1938. Walter Neff is an insurance salesman returning to his office in downtown Los Angeles one late night. He begins dictating a confession into his old school Dictaphone as he bleeds from a gunshot to his shoulder. There, he tells his claims adjuster boss and mentor, Barton Keyes his story that led him to the point he’s at. This is his story…

Neff goes to the home of Mr. Dietrichson for a routine house call remind him that his automobile insurance policy is up for renewal. He’s not home, but his wife, Phyllis, is. She flirts with Neff, but he tries to keep it strictly business. When she innocently asks him how she could take out an accident policy on her husband without his knowledge, Neff figures Phyllis wants to off her husband. He makes it clear he’s only there to discuss the auto insurance policy.

Unfortunately for him, he can’t stop thinking about Phyllis, and when she shows up to his apartment, he can’t resist her temptations. Since he knows the insurance biz inside and out, he comes up with a plan where Mr. Dietrichson will “accidentally” fall from a train. That will trigger a double indemnity clause which pays out twice the policy’s face value. Neff dupes Dietrichson into signing the policy by claiming he’s signing a duplicate auto insurance policy. He also tricks him into signing a blank check to pay for it.

When Dietrichson breaks a leg, Phyllis must drive him to the Southern Pacific Glendale train station for a college reunion in Palo Alto. Neff hides in the car’s backseat, and strangles him once Phyllis turns on a deserted street.

Neff then poses as Dietrichson, and boards the train. He heads to the observation car, and steps off to the open air platform to smoke. Before Neff can execute the rest of his plan, a passenger names Mr. Jackson butts in. Neff eventually shoos him away. Once gone, Neff tosses Dietrichson’s crutches off the train at a prearranged spot in Burbank. He then jumps off it himself. Phyllis is there with the body, and Neff drags it onto the tracks.

Mr. Norton is the head honcho for the insurance company Neff works for. He believes the death was a suicide, but something in Keyes’ stomach tells him otherwise. He suspects Phyllis has something to do with it because he suspects she was having an affair.

Eventually, Norton comes to suspect foul play as well, and refuses to pay the insurance claim. He and Keyes find it puzzling Dietrichson did not file a claim for his broken leg, and they deduce Dietrichson didn’t know about the policy, but Keyes needs proof.

Dietrichson’s daughter, Lola, goes to Keyes to tell him she believes her stepmother was behind his death. Her mother also died under suspicious circumstances when Phyllis was her nurse. Neff starts paying visits to Lola to keep her from going to the police, but soon the visits are due to the guilt he feels for his part in her father’s death. Neff also thinks Phyllis will murder Lola for the inheritance. Before he died, Dietrichson caught wind that Phyllis wanted him dead for his money, and switched his will so Lola gets everything, and she gets nothing.

Keyes finds Mr. Jackson from the train on the night of Dietrichson’s death, and interviews him. He suspects that the man on the train was not Dietrichson, but Phyllis’ accomplice. Keyes gives Jackson some photos of Dietrichson to look over. Jackson says the man he met was at least 10 years younger.

Keyes is now certain he can prove a murder, and wants to force Phylis to sue for payment of the claim. Neff warns Phyllis against suing for that very reason, and also cops to the fact he’s been talking to Lola about her past. Unfortunately for Neff, Phyllis decides to go for broke, and pursue a lawsuit to force payment of the claim.

Lola tells Neff that Phyllis is also having a fling with her temperamental boyfriend, Nino Zachetti. Keyes suspects Nino as Phyllis’ accomplice, and Neff sees that as light at the end of the tunnel for himself. Neff meets Phyllis at her house, and reveals he knows about her affair with Nino. He suspects Phyllis will now have Nino kill him too, so he decides to kill her, and make it look like Nino did it. However, Phyllis is two steps ahead, and shoots Neff in the shoulder.

Although wounded, he doesn’t fall. He inches closer to Phyllis, and dares her to shoot him again. When she doesn’t, he takes the gun from her. She never loved Neff until a minute ago, and that’s why she couldn’t fire again. Neff, not buying what she’s selling, shoots her twice when she goes in for a hug; killing her dead.

Neff goes outside to wait for Nino as he planned. He tells Nino not to go inside, but to instead go to Lola because she loves him. Although not believing Neff himself, Nino does go to her anyway.

Neff returns to his office in downtown Los Angeles, and begins dictating a confession into his Dictaphone as his story catches up to the beginning of the film. Keyes shows up, and hears enough to figure the truth. He tells Neff he’s all washed up.

Neff replies he’s going to Mexico instead of facing death in jail. However, he’s lost too much blood, and too weak to reach the elevator. He tells Keyes that he couldn’t figure out the case because the man he was looking for was across the desk from him. Keyes replies he was closer than that. Neff says he loves him too, and with that, Keyes lights Neff’s cigarette. The two wait for the police (and an ambulance) to arrive to take him away.

User Rating: Be the first one !
May 11, 2019
4 minutes read
Show More
Back to top button
Close
Close