It’s 1964, St. Nicholas in the Bronx. A charismatic priest, Father Flynn, tries to upend the school’s strict customs. However, Sister Aloysius Beauvier, the iron-gloved Principal, fiercely guards those traditions as she believes in the power of fear-based discipline. As the winds of political change sweep through the community, the school accepts its first black student, Donald Miller. When Sister James, a hopeful innocent, shares with Sister Aloysius her guilt-inducing suspicion that Father Flynn is paying too much personal attention to Donald, Sister Aloysius sets off on a personal crusade to unearth the truth and to expunge Flynn from the school. Now, without a shred of evidence besides her moral certainty, Sister Aloysius locks into a battle of wills with Father Flynn which threatens to tear apart the community with irrevocable consequences. 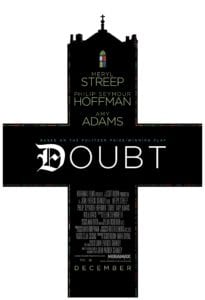 In Doubt, Father Flynn heads a Catholic parish in 1964 in the Bronx. He gives a sermon on doubt and says that it can be a binding force for those in the community. Sister Aloysius, an austere nun, and principal of the parish school, becomes suspicious of Father Flynn and worries that he might have doubts about his faith or the church. She counsels her fellow nuns to watch Father Flynn for signs of trouble.

Sister James shares her suspicions with Sister Aloysius, and Aloysius becomes certain that Flynn has molested Donald, despite lacking any solid evidence. The Sisters lure Flynn into Aloysius’ office under the pretense of discussing the Christmas program and accuse him of victimizing Donald. Flynn denies that anything inappropriate happened, and, when pressed, tells them that Donald had been caught drinking alter wine, and Flynn covered for him so that he would not get thrown out of the alter boys.

Sister James is satisfied, but Sister Aloysius persists in her attempts to get the dirt on Flynn. She contacts Donald’s mother and shares her concerns. Donald’s mother tells her that Donald’s father beats him for having homosexual tendencies and says that she isn’t too concerned with what’s happening, since Donald just needs to survive until summer, when he can get into a good high school.

Sister Aloysius confronts Father Flynn again. This time, she tells him that she contacted a nun at Father Flynn’s previous assignment, and implies that Flynn was transferred for similar allegations. Flynn yields, admitting that some unspecified misconduct had occurred in his past, and agrees to be transferred if Aloysius will cease to pursue him. She agrees and Flynn is promoted to another position in which he will continue to have contact with children.

After Father Flynn is gone, Sister Aloysius has a talk with Sister James. Sister James expresses that she continues to believe in Flynn’s innocence. But Aloysius is still certain, even with no further evidence of what happened, and no real confession from Flynn. Aloysius tells James that she lied about contacting the nun and that it’s necessary to step away from God in the pursuit of wrongdoing. The film ends with Sister Aloysius breaking into tears and telling Sister James, “I have doubts. I have such doubts.”